How much time does a brain need to learn a new word? A team of Skoltech researchers and their colleagues monitored changes in brain activity associated with learning new words and found that cortical representations of the sound and meaning of these words may form in just 1 to 2 hours after exposure without any night’s sleep consolidation, as earlier research suggested. This research has implications for diagnosing speech disorders and improving the efficiency of learning. The paper was published in the journal Frontiers in Neuroscience.

Consider the word snollygoster, which means someone without principles, especially a politician. It is likely that you did not know this word before, but you do know now — repeat it several times, and you have learned it. This rather simple and everyday task of learning new words, however, is quite poorly understood in terms of neurocognitive mechanisms that ensure you will remember what snollygoster is days, weeks and years later. 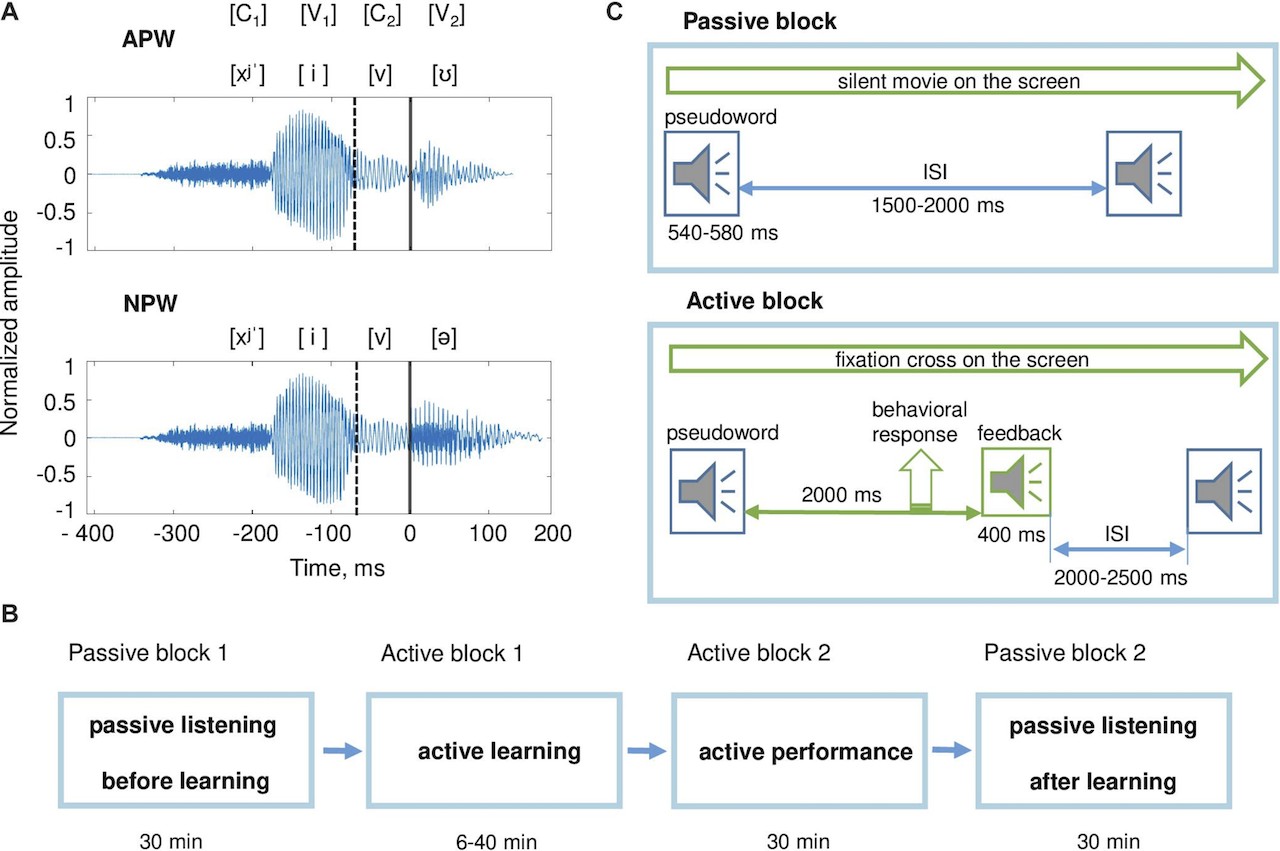 “By nature, every word has two aspects: a particular phonetic pattern that is effectively detected by the brain and the semantics associated with the phonology (an object or an action). In order to dig into the word learning mechanism, one should provide word learning in both aspects: a pseudoword should have original phonetics, i.e. the word should not be constructed from the known roots or other morphemes, and it should acquire original meaning, i.e. not be a synonym for any known word. These restrictions are rather tough to satisfy and control in an experimental setting. The second difficulty is the separation of sematic and phonological processes as they overlap in time and brain localization. Also, the design of effective learning procedure that mobilizes the participant’s brain is challenging,“ Alexandra Razorenova, a coauthor of the paper, explains.

Razorenova and Anna Butorina of the Skoltech Center for Computational and Data-Intensive Science and Engineering (CDISE) in collaboration with the Moscow Center for Neurocognitive Research (MEG Center) tried to look for evidence on how the brain learns both a phonological representation of a new word (how it sounds) and its meaning, or the semantic aspect of new word acquisition. They were also searching for what’s called rapid cortical plasticity, i.e. immediate changes in brain activity that follow the learning of a new word. Earlier studies of this particular design have been rare and inconclusive.

The team used magnetoencephalography (MEG) to observe how 24 participants in the experiment learned eight Russian pseudowords carefully designed for the study. A participant had to associate four particular pseudowords with hand and foot movements (so that these pseudowords would mean something). Unlike their colleagues in earlier studies, the researchers did not focus on any specific cortical regions or time intervals, performing an unbiased data search to find neural activity changes induced by word learning.

Not only were they able to observe immediate changes in cortical activity during the process of word learning, but the team also showed that these changes were significantly different for ‘meaningful’ pseudowords compared to those that were not assigned any meaning.

“The contrast between neural responses elicited by action-associated, and “empty” pseudowords before and after learning procedure answers the question regarding the “semantic network” localization and the relation between sematic and phonological learning. Our findings present the evidence of short-term effortful semantization of word-form and suggest that this semantization facilitates or even triggers strengthening of the cortical network that underlies the phonological aspect of lexicality. That is, “meaningful” pseudowords acquire priority to be recognized and remembered,” Razorenova says.

Some earlier electroencephalography and MEG studies also reported rapid cortical plasticity within short experiments; in these studies, repetition suppression was characteristic for real words, while for pseudowords repetition caused response enhancement. Razorenova’s group found the opposite to be true. The scientists hypothesize that this might be due to the fact that deep familiarization with word-forms during the experiment completely changed the repetition effect: instead of increasing neural responses to previously unfamiliar word-forms, it decreased them when the word-forms became well-recognized concatenations of phonemes. “The above considerations suggest that our findings most probably reflect a mechanism of familiarization memory that, once formed, lasts over days,” Razorenova notes.

The researchers believe their experimental paradigm and data analysis methods will be useful for diagnostics of speech disorders, as it will help differentiate the phonological processes disorders associated with Broca’s complex dysfunction from the sematic network failure.

“In a wider perspective, our results evidence the crucial role of interactive learning in contrast with passive learning procedures widely used in the literature. The key role of personal experience, or action or emotion association with the task, are consistent with the Pavlovian learning paradigm. However, this reinforcement method is still underestimated in linguistic methodology. The research may be used as experimental evidence for modification of foreign language learning programs for adults and in programs working with children with developmental disorders of speech and language. These programs should be realized in interactive way with wide usage of simulators of active search and reinforcement,” Alexandra Razorenova concludes.