A group of scientists led by Ph.D. Professor Vladimir Drachev (Center for Design, Manufacturing and Materials) has developed a technology and created a device that modulates optical radiation with a wavelength of 1.5 μm with an electrical signal with a frequency of up to 10 GHz. The device created at Skoltech opens up new perspectives for the development of 6G system components, especially terahertz-to-optical signal converters. The research was carried out within the framework of the complex project “Development of technologies and components of integrated microwave radio photonics,” supported by the Ministry of Science and Higher Education.

It is aimed, among other things, at creating radio-photonics technologies in the RF in semiconductor integrated design. Electro-optical modulator and other components of high-speed optical data transmission systems are all critical elements of modern telecommunications.

Research in the sixth generation mobile technology field is a part of work done in the Skoltech-based NTI Center of Excellence on wireless communication and the Internet of Things technologies (NTI CoE). The Skoltech researches rely on an advanced scientific and laboratory base and established long-term relations with the leading Russian companies. 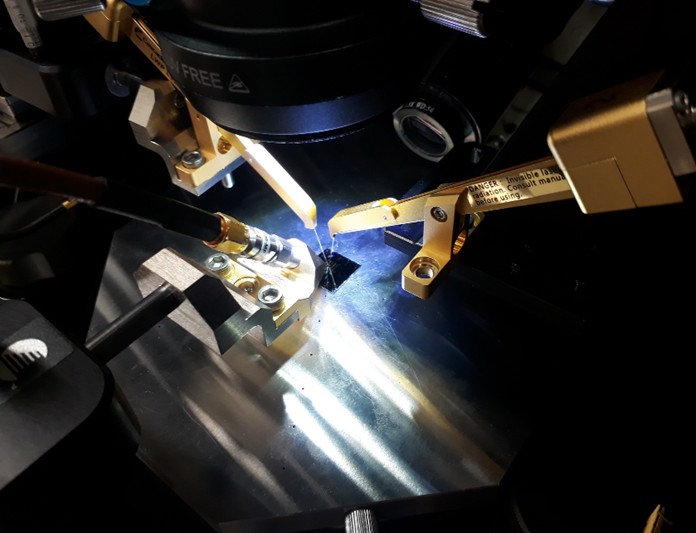 The development of 6G will be determined mainly by technological breakthroughs in generation, modulation, and detection of terahertz and sub-terahertz radio waves. These processes should be implemented in miniature devices, manufactured, for example, using standard planar technologies of micro- and nanoelectronics.

According to the leading researcher Sergei Kosolobov Ph. D, the know-how of this technology is Skoltech’s intellectual property. It is entirely based on the implementation of the advantages of the Skoltech hardware complex. It consists of the insights into the physical effects at the modeling stage in combination with high-precision manufacturing of nano-sized modulator elements.

The solution’s breakthrough nature consists of the practical implementation of an experimental sample of a microwave electro-optical plasmon modulator, which does not exceed a few tens of microns in size. The resulting device will be used as an element of a 6G terahertz radio-photonic transceiver.

Dmitry Lakontsev, head of the NTI Center of Excellence, remarks:“The future of cellular communications depends on the full integration of the fiber-optic transport segment with compact radio modules. Ultimate miniaturization and dramatic cost reduction of optoelectronic and radio-photonic devices and components due to planar technologies production are essential for the entire area of the promising 6G technologies. It shouldn’t be an overstatement to say that such research is a highly essential part of science development in the area of telecommunication studies and is crucial for the further localization of the production of 6G infrastructure and equipment in Russia.”

Fundamental characteristics and advantages of the device include:

Further prospects for this Skoltech project include expanding the frequency range to hundreds of gigahertz and increasing the variety of produced components by adding generators and detectors for terahertz and subterahertz frequencies. There are sufficient opportunities for expanding the product range of this class of devices for the planar radio-photonic and optoelectronic transceivers for the fiber-optic segment of 6G networks.