Researchers from the Severinov Lab at Skoltech have looked at how a poorly studied type of CRISPR–Cas defense system from a bacterium living at extremely high temperature gets to know its enemy by selecting snippets of bacteriophage’s genetic information for a genetic “database” it uses to ward off subsequent infections. Understanding of this mechanism opens new ways for further genomic manipulation of both the bacterial host and its virus. The paper was published in the journal Nucleic Acids Research.

CRISPR–Cas are powerful defense systems that most prokaryotes use to recognize and destroy invading genetic material such as bacteriophages. Each system is essentially a set of nucleic acid-cleaving Cas proteins armed with fragments of foreign sequences stored in CRISPR arrays, special databases located in the chromosome of the cell. Much like a police unit receiving a suspect profile, Cas proteins form complexes with short CRISPR RNAs containing information about the genetic invader, search for nucleic acids that are complementary to the CRISPR RNAs, and then recognize and destroy them. 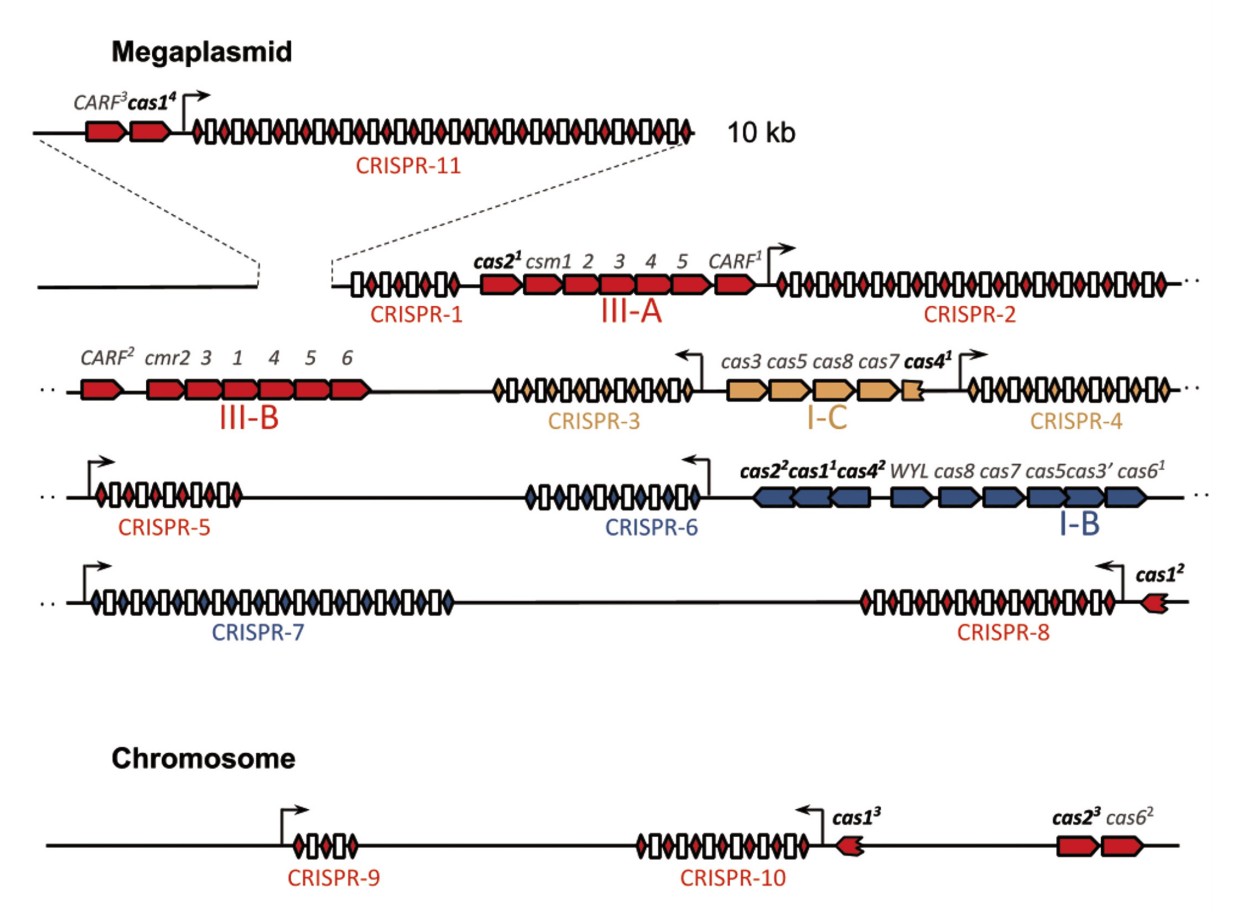 Depending on the kind of Cas proteins, scientists distinguish six types of CRISPR–Cas systems. Type III is the least studied and the most complex. “Type III systems stand out from all others. First, they recognize foreign RNA, rather than DNA recognized by other systems. Second, in a bizarre twist, upon recognizing target RNA the Type III systems destroy the DNA from which this RNA is transcribed,” explains the lead author Konstantin Severinov.

Severinov and his colleagues studied the Type III system in a hyperthermophilic bacterium Thermus thermophilus that inhabits hot springs around the world. They were interested in how the bacterium acquires spacers, or the “entries” for its CRISPR “database”. Spacers are bits of foreign DNA in the CRISPR array that serve as printing plates for CRISPR RNAs that are used to recognize subsequent infections.

“Being a thermophilic bacterium, i.e. living at 65C and above, Thermus is a good model organism for biochemical and especially structural work, because its proteins are very robust. However, the downside of this is that most people never study Thermus as a microbe, but rather as a source of sturdy proteins,” says Severinov. “Spacer acquisition is the least understood part of CRISPR immunity that in many respects operates through a Lamarckian rather than Darwinian mode. In the case of Type III CRISPR systems, the situation becomes especially complex, as only spacers acquired in a certain orientation will be able to target foreign RNA. This is not true for CRISPR-Cas systems of other types. So it was of high interest to determine how a Type III system ensures efficient acquisition of spacers capable of providing defense to the host.”

The researchers cultivated T. thermophilus cells in the laboratory, infected them with bacteriophage they isolated earlier from a hot spring in Kamchatka, and observed how the attacked bacteria expanded their Type III CRISPR arrays. Among other things, the researchers were able to show that new spacers came from a tiny region of the phage genome that is first injected in the infected bacterial cell. The bias is likely due to the fact that recognizing the enemy early on allows infected cells to clear the infection and survive rather than due to any intrinsic properties of the Type III machinery, which presumably selects spacers randomly, meaning that 50% of acquired spacers are inserted in a wrong orientation and thus do not provide any defense. The researchers hypothesize that the region of the phage genome from which spacers are acquired may encode anti-CRISPR proteins, and thus it is crucial for the cell to deploy its defense before it is disabled.

The team also showed that some phages escaped the Type III CRISPR-Cas defense by losing small bits of their DNA from targeted regions.

“The observation that we can select “escaper” phages that deleted regions recognized by defensive CRISPR RNAs means that we can easily engineer mutant phages by targeting them with engineered CRISPR RNAs recognizing genomic regions of interest,” says Severinov, “given how little we know about viruses infecting thermophilic bacteria, our finding opens a way to probe these viruses by designer CRISPR RNAs and determine the functions on individual viral genes.”

The study was supported by the Russian Science Foundation grants. Other organizations involved in this research include the RAS Institute of Molecular Genetics and the Waksman Institute of Rutgers, The State University of New Jersey.