Skoltech researchers and their colleagues from Russia, the US and Sweden have described an unusual RNA polymerase that helps a poorly studied crAss-like bacteriophage transcribe its genes. They “caught” this enzyme by a tiny — less than 3% of its size — portion of the amino acid sequence that was similar to other RNA polymerases. The paper detailing the discovery has been published in the journal Nature.

The first author of this paper, Arina Drobysheva, is a Skoltech graduate and researcher at the Center of Life Sciences who won recognition at the Institute this year for her outstanding master’s thesis in molecular biology. The lead author, Maria Sokolova, assistant professor at the CLS, continues her work as part of the Skoltech-MIT Next Generation Program. CLS research scientists Matvei Kolesnik and Evgeny Klimuk, PhD student Sofia Panafidina and Professor Konstantin Severinov also took part in the research. 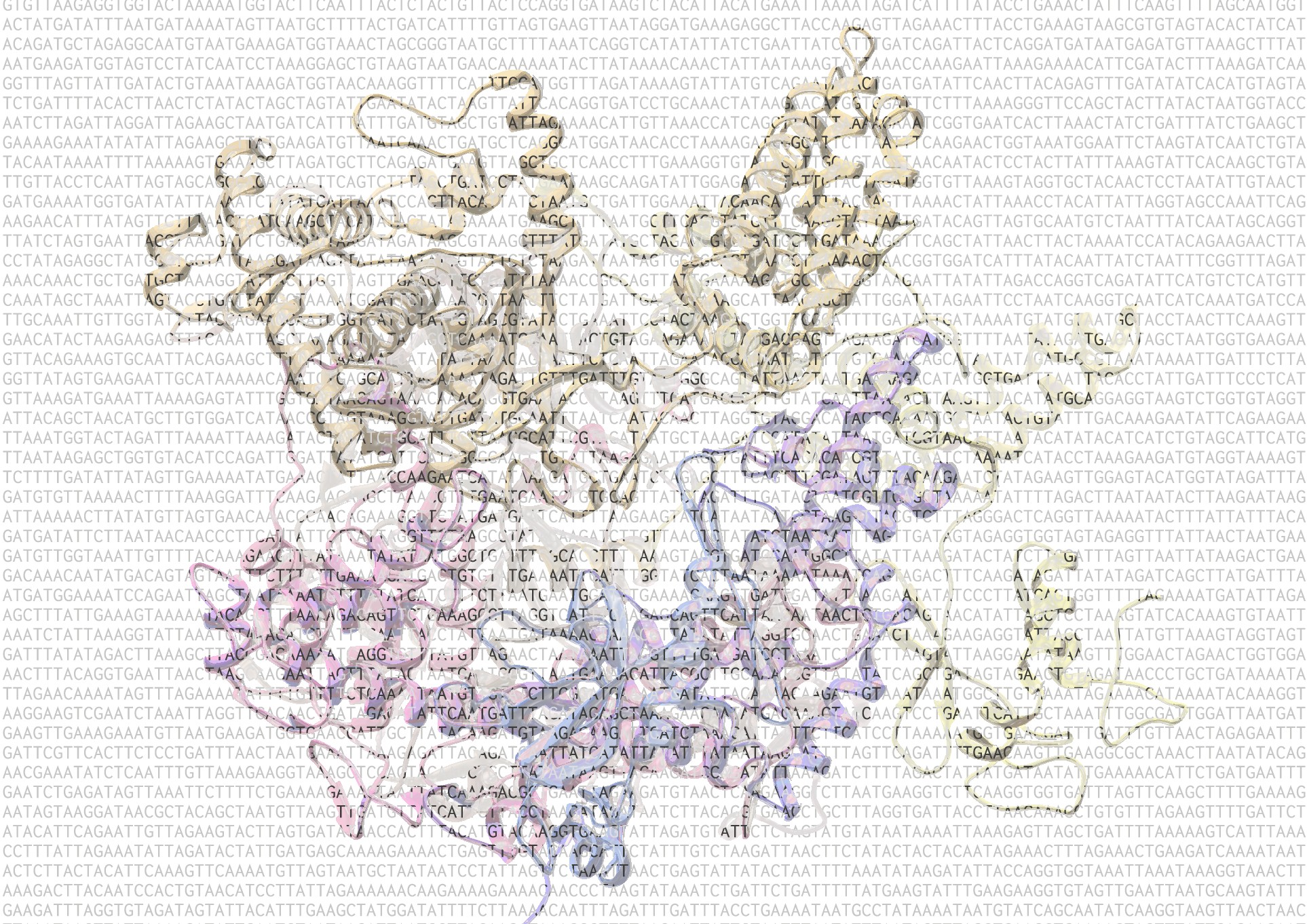 CrAss-like phages get their name from one recently discovered virus, crAssphage. The name means “cross-assembly phage”, in honor of the method used for genome assembly. This virus was found when researchers were analyzing publicly available human fecal metagenomes (that is, indiscriminate genetic sequences of everything that was found in a sample). Surprisingly, crAssphage, found only in 2014, turned out to be the most abundant phage in the human gut. Later scientists, including the team of this paper’s coauthor, Eugene Koonin, found more of these viruses, none of which had been studied in a lab before.

“Since crAss-like phages are the most abundant viruses in human gut, understanding how they infect their host cells will allow to control the composition of human microbiome, which in turn is important for human health and disease. We also became interested in studying crAss-like phages because it was predicted that these viruses use highly unusual RNA polymerases (enzymes that make RNA from a DNA template) to transcribe their genes,” Maria Sokolova says.

Sokolova and her colleagues took phi14:2, a crAss-like phage that preys on Cellulophaga baltica, a bacterium commonly found on beaches. This virus turned out to be a convenient model for lab research, and the team studied its putative RNA polymerase gp66, a rather large protein with a previously unknown function. By looking at its amino acid sequence, the researchers spotted a snippet that looked like a part of cellular multisubunit RNA polymerases. Researches first purified gp66 and demonstrated its RNA polymerase activity in vitro.

“The crAss-like phage RNA polymerase turned out to be inactive in a standard test for RNA polymerase activity, which works well for all other RNA polymerases. We knew that viral enzymes may have unusual features, and thus we continued to seek the activity in other tests — and found it. We were very happy to find it eventually because before that moment, we were concerned whether the bioinformatics prediction was valid, since the similarity of gp66 to known enzymes was too low,” Sokolova notes. 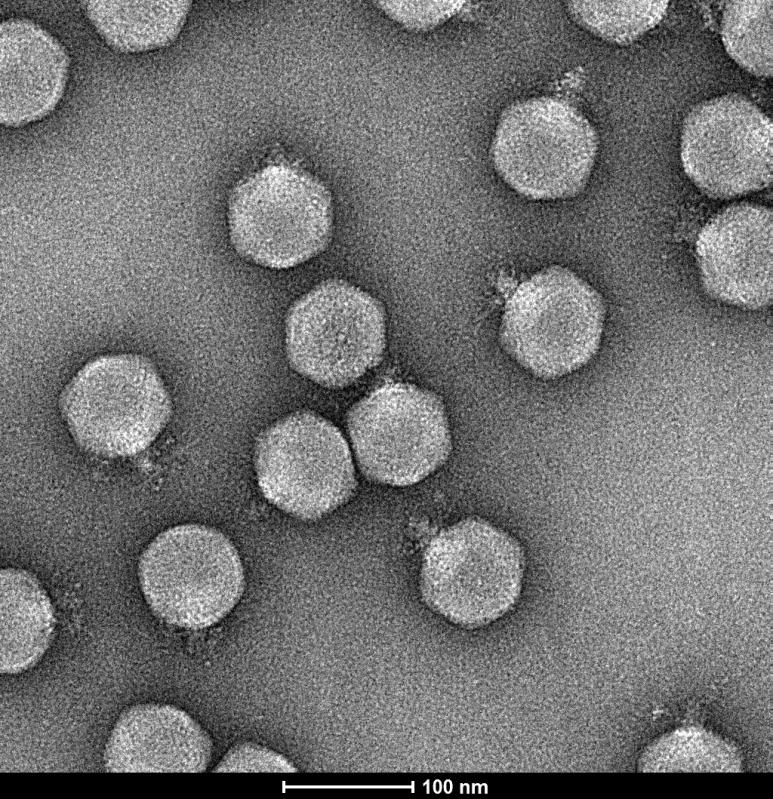 In vitro experiments showed that rifampicin, an antibiotic, shut down C. baltica’s own RNA polymerase but did not affect gp66. And when the researchers looked at what phi14:2 genes ended up transcribed in an infected cell dosed with rifampicin, they found a lot of so-called early genes, ones that encode the machinery a virus needs to overtake the host cell at the early stages of an infection, but fewer middle and late genes, active at later stages. This implies that phi14:2 is a Bring Your Own RNA Polymerase virus, relying on gp66 to work at the start of an infection before it can utilize the polymerase of the host cell.

The scientists managed to solve the crystal structure of the gp66 protein and discovered that most of its structural elements have no known counterparts, and their functions are unknown. However, the core of gp66 turned out to be very similar to an RNA polymerase that in higher organisms is involved in a process of RNA interference, which allows to silence the function of some genes. According to Konstantin Severinov, a coauthor of the paper, “this is a startling result that suggests that enzymes of RNA interference, a process that was thought to be specific for cells of higher organisms (eukaryotes), have originated, at least partially, from a phage, in other words, were “borrowed” from a bacterial virus, an ancestor of current crAss-like phages, sometime early in evolution. This discovery shows that evolution of higher cells was a complex process that involved multiple acquisitions of bacterial and even phage enzymes by ancestral cells. Another textbook example of this is the acquisition of whole bacteria by an ancestral eukaryotic cell, that now became mitochondria.”

Researchers also found that, in the crystal structure of gp66, its catalytic site is in an inactive conformation that has never been seen in any RNA polymerase. They suggested that prior to the packaging into the phage particle, gp66 is in a self-inhibited form.

“To this end, this enzyme possesses properties common to proteins that form virus shells (e.g. hemagglutinin, flavi- and alphavirus glycoproteins). These proteins undergo assembly-dependent maturation that is required for activity. CrAss-like phage RNA polymerase undergoes such maturation upon incorporation into the virus particle or upon translocation through the tail channel,” notes Petr Leiman of the Sealy Center for Structural Biology and Molecular Biophysics at the University of Texas Medical Branch, a co-author of the paper.

Maria Sokolova says that this is the first study that addresses the function of crAss-like viruses at the molecular and atomic level of detail. “Our work paves a way to regulation of crAss-like phage infection which in its turn may inform new approaches for manipulating the composition of the human gut microbiome,” she adds.

Other organizations involved in the research include the Institute of Molecular Genetics of the Russian Academy of Sciences, the Waksman Institute for Microbiology, Rutgers, The State University of New Jersey, Peter the Great St Petersburg Polytechnic University, Rowan University School of Osteopathic Medicine, Linnaeus University, the National Center for Biotechnology Information, and the University of Texas Medical Branch.