Researchers from the Oil and Gas Research Institute of the Russian Academy of Sciences and their Skoltech colleagues have surveyed the newest known 30-meter deep gas blowout crater on the Yamal Peninsula, which formed in the summer of 2020. The paper was published in the journal Geosciences. 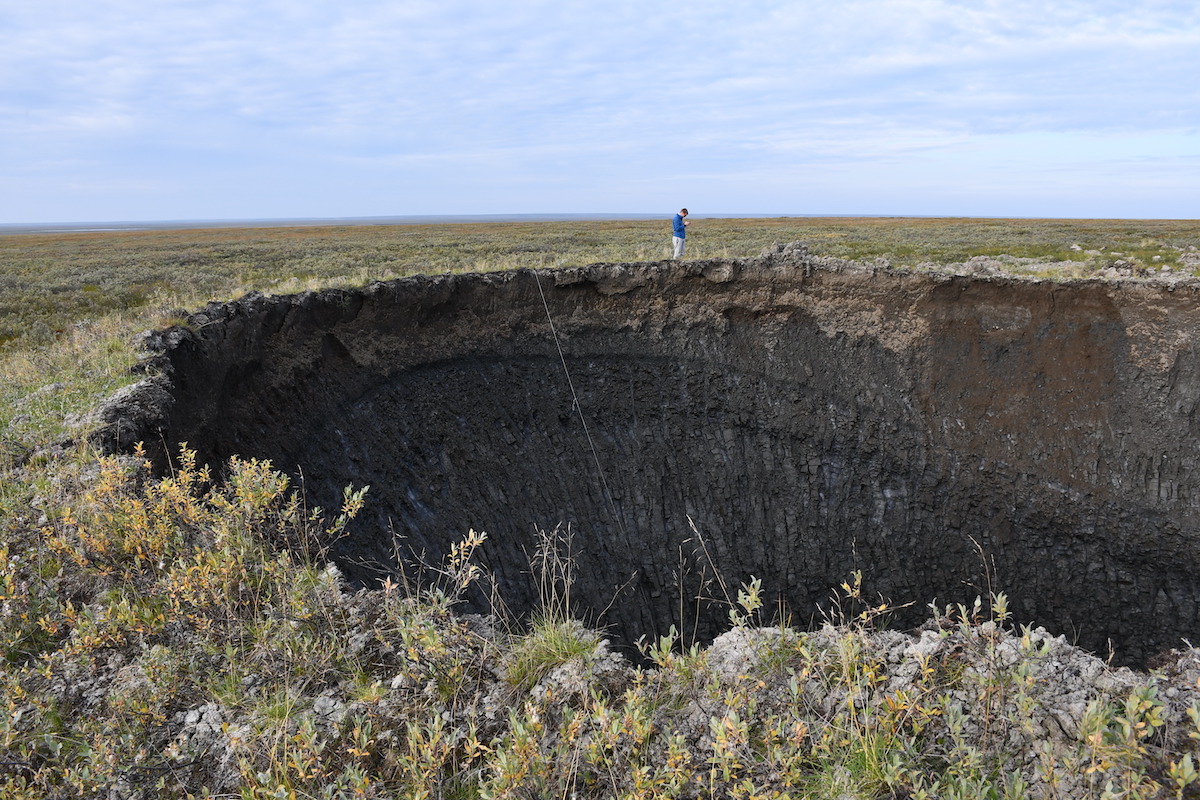 Giant craters in the Russian Arctic, thought to be the remnants of powerful gas blowouts, first attracted worldwide attention in 2014, when the 20 to 40-meter wide Yamal Crater was found quite close to the Bovanenkovo gas field. The prevailing hypothesis is that these craters are formed after gas is accumulated in cavities in the upper layers of permafrost, and increasing pressure ultimately unleashes an explosive force. Most of these craters are rather short-lived as they apparently quickly fill with water over several years and turn into small lakes. As of now, there are some 20 known and studied craters.

In 2020, researchers found and surveyed the latest crater, dubbed C17, about 25 meters in diameter. It was found by Andrey Umnikov, director of the non-profit partnership “Russian Center of Arctic Development,” during a helicopter flight on July 16 in the central part of the Yamal Peninsula, close to three other craters including the famous Yamal Crater. OGRI deputy director Vasily Bogoyavlensky led the August 2020 expedition, which was possible thanks to the generous support of the government of Yamalo-Nenets Autonomous Area and Mr Umnikov’s organization. Evgeny Chuvilin and Boris Bukhanov from the Skoltech Center for Hydrocarbon Recovery took part in the expedition.

“The new crater is impressive in its ideal state of preservation, primarily the cone-shaped top where ejecta was thrown from, the outer parts of the heaving mound that precipitated the crater, the walls of the crater itself which are incredibly well preserved, and, of course, the gas cavity in the icy bottom of the crater,” Chuvilin says.

“Firstly, we got there in time to find the object in its almost pristine state, with no water filling it. Secondly, the giant underground cavity in the ice is unique in itself. A part of the icy dome of this cavity was preserved; before the explosion, it had this circular dome, and its bottom was elliptical, elongated to the north, with its axis ratio of approximately 1 to 4.5. From what we know we can say that the C17 crater is linked to a deep fault and an anomalous terrestrial heat flow,” Bogoyavlensky notes.

A certified pilot, Igor Bogoyavlensky, piloted the drone used for crater surveillance. That was the first time a drone flew inside the crater for “underground aerial survey” 10 to 15 meters below ground, running the risk of losing the aircraft. The team used the data to build a 3D model based on the drone footage from inside the crater. This is the first time scientists were able to study a “fresh” crater that has not yet eroded or filled with water, with a well-preserved ice cavity where gas had been accumulating. 3D modeling was earlier used for the Yamal Crater, but at the time it was already filled with water.

“Over the years we’ve gained a lot of experience with surveillance drones, yet this “underground aerial survey” of the C17 crater was the most difficult task I had ever faced, having to lie down on the edge of a 10-story deep crater and dangle down my arms to control the drone. Three times we got close to losing it, but succeeded in getting the data for the 3D model,” Igor Bogoyavlensky, the drone pilot, says.

Vasily Bogoyavlensky says the 3D model allowed them to capture the extremely complex shape of the underground cavity. “We could not see everything from above, especially the grottos, possible caverns in the lower part of the crater. You can clearly see all that with the 3D model. Our results suggest unequivocally that the crater was formed endogenously, with ice melting, a heaving mound dynamically growing due to gas accumulation and the explosion,” he adds.

The Skoltech researchers were able to study the cryogeological conditions of the crater, the composition of permafrost in this area as well as ejecta from the crater, temperature conditions at the crater floor and some other parameters. “This information will shed light on the conditions and formation of these unusual objects in the Arctic,” Chuvilin points out.

In 2021, OGRI and Skoltech researchers are planning a new expedition to this crater to monitor its state and conduct further research into how it was formed.