Skoltech scientists have proposed a Mass Spectrometry Imaging (MSI) method leveraging the unique features of human vision. The research was published in the journal Analytical Chemistry. 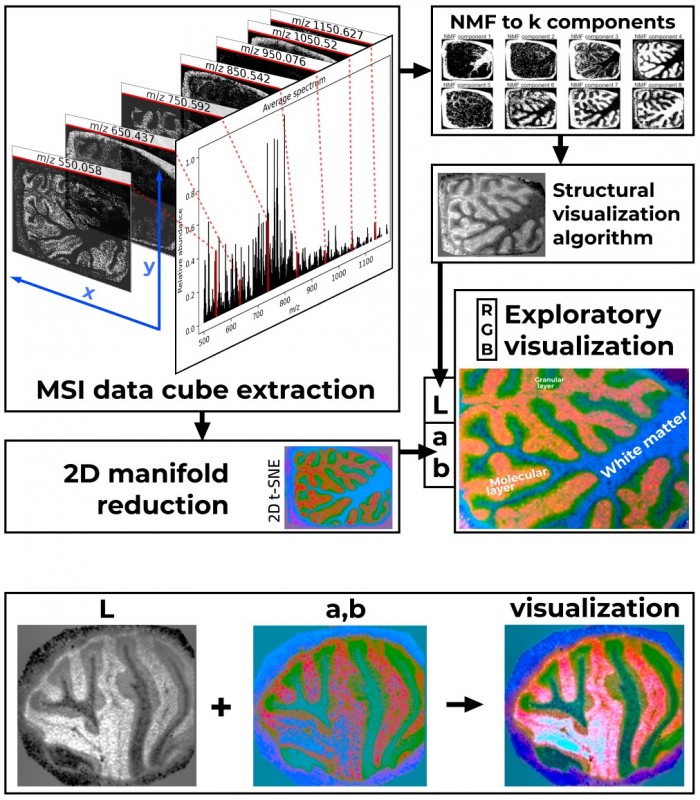 High-resolution mass spectrometry is an analytical technique that accurately measures the mass-to-charge ratio (m/z) of ions, produced from molecules by an ionization process, and the ion signal intensity (the relative number of ions). These measurements allow determining molecules’ weights and structure, (by fragmenting them), thereby identifying various compounds, such as proteins, lipids, metabolites, peptides, drug components, and the like. MSI provides information about the spatial distribution of molecules in tissues by performing mass spectrometry analysis of ions using local laser ionization of molecules at each point of the sample (for example, a tumor section).

Interpreting MSI data is quite a challenge. One can start by imaging the distribution of molecules over the tissue section surface and creating a full color image where each color represents a points with similar ion composition. So thousands of ions with corresponding intensities at each point should be represented by just three numerical values that reflect the MSI data to the utmost extent and are correlated with a 3D color space to enable further analysis by a researcher.

“It is essential to glean as much information from the image as possible, taking into account the genuine features of human vision, such as non-linearity and essentially different sensitivity to changes in brightness and color. Although the theory of color perception has been studied since the first half of the 20th century, experts still lack commonly accepted mathematical models accurately explaining all the known properties of human vision,” Anastasia Sarycheva, the lead author and a Skoltech PhD student, explains.

Researchers from the Skoltech Center for Computational and Data-Intensive Science and Engineering (CDISE) and A.A. Kharkevich Institute for Information Transmission Problems of RAS have proposed a new MSI approach leveraging the theory of human color perception and comparable to the existing techniques in the level of detail. The new method preserves borders and gradients when superposing regions of similar ion composition. Thus, the resulting image is more interpretable than in other MSI visualization techniques. The method has been tested on both simulated and experimental data obtained by researchers from the Skoltech Mass Spectrometry Laboratory jointly with biologists from the Skoltech Center for Neurobiology and Brain Restoration (CNBR).