Scientists from Hvar Observatory (Croatia), the University of Graz (Austria), and Skoltech (Russia) along with their colleagues from the U.S., Belgium, and China have investigated a peculiar solar storm that happened on the International Women’s Day 2019. The all-female research team unraveled how a double structure erupted from the Sun, resulting in a plethora of phenomena observed across the electromagnetic spectrum, eventually merging into a single structure that sped toward the Earth. Published in Astronomy & Astrophysics, the study contributes to accurate predictions of hostile space weather events. 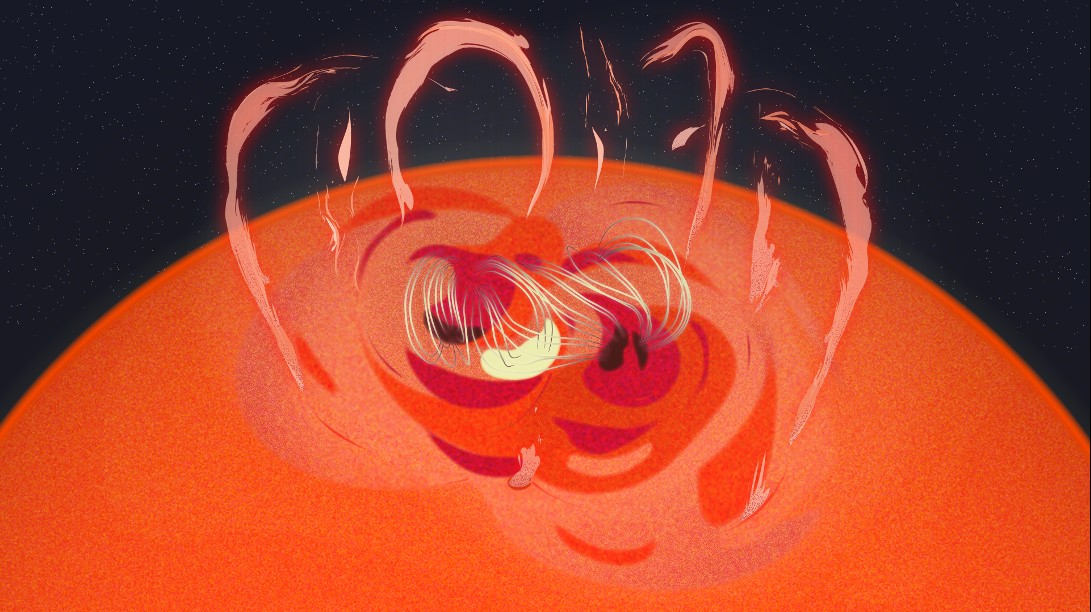 Solar storms are the most violent eruptions in the Solar System, fueled by the magnetic energy of the Sun. These streams of magnetized plasma expelled from the Sun travel through the interplanetary space and may create radiation hazards for astronauts and induce currents disturbing space- and ground-based technological systems.

To forecast these dangerous events, researchers need to understand their underlying physics, as well as the nature and the effects on Earth of the associated phenomena:

These events tend to accompany strong solar storms and serve as proxies for their study through remote observations at various wavelengths of the electromagnetic spectrum: visible light, radio waves, UV radiation, and X-rays.

If a major storm passes over a probe in the interplanetary space, these remote sensing data are complemented by direct measurements of the storm’s propagation speed and the orientation and strength of its magnetic field. For storms directed at our planet, their magnetic field is inferred from how it affects that of the Earth.

Combining remote and in situ observations, the study in Astronomy & Astrophysics presents a comprehensive analysis of an eruptive event of March 8, 2019, which reveals the finesse of the physics that underlies solar storms. The scientists report on a plethora of associated phenomena: a double-peak solar flare, two so-called loop ejections evolving into an Earth-directed CME, two extreme UV waves in close succession, and two-stage coronal dimmings that evolved co-temporally with the flare and type II and III radio bursts.

“This solar storm seemed peculiar from the very first moment. It had many accompanying phenomena that could be observed at the Sun, something that is usual for very strong solar storms. The only trouble was — the storm was not strong at all!” says Dr. Mateja Dumbović, the lead author of the study and a research associate at Hvar Observatory in Croatia. She further explains how the storm was named: “In solar physics it is common to name interesting solar storms according to the date when they happened. We have for instance Halloween and Bastille day events, and now also an International Women’s Day event.”

“We showed that on March 8, 2019, the Sun produced two successive eruptions of two systems of sheared and twisted magnetic fields, which merged already in the upper solar atmosphere and further evolved out as a single entity. We also demonstrated that the large-scale magnetic field significantly influences both the early and the interplanetary evolution of the structure. During the first eruption the stability of the overlying field was disrupted, which enabled the second eruption,” says Dr. Astrid Veronig, professor at the University of Graz, who co-authored the study.

“When the solar wind, a continuous flow of charged particles from the Sun, leaves the solar atmosphere, it carries away part of the solar magnetic field. As a result, the solar magnetic field permeates the entire Solar System. Since the Sun’s equator rotates faster than its poles, the magnetic field twists into an Archimedean spiral, as it extends through the Solar System, creating the largest structure in our Solar System — the heliospheric current sheet, which separates regions of the solar wind where the magnetic field points toward or away from the Sun. The current sheet circles the solar equator like a wavy skirt around a ballerina’s waist. Earth and all the planets of the Solar System exist within these wavy spiral folds. In our study we showed that the location of the heliospheric current sheet between the active region on the Sun and the Earth likely influences the propagation and the evolution of the structures erupted on March 8, 2019. And whatever storms may rage, we wish everyone a good weather in space,” says study co-author Dr. Tatiana Podladchikova, an assistant professor at the Skoltech Space Center.

The International Women’s Day study was carried out by a synergetic international team of 10 female researchers from Europe, Russia, the United States, and China at different stages in their scientific careers, from PhD students to full professors, including three awardees of the prestigious international Alexander Chizhevsky medal for space weather and space climate: Dr. Mateja Dumbović (the University of Zagreb, Croatia), Dr. Tatiana Podladchikova (Skoltech, Russia), and Dr. Julia Thalmann (University of Graz, Austria). Other institutions involved in this research include NorthWest Research Associates (USA), the Solar-Terrestrial Centre of Excellence — SIDC, the Royal Observatory of Belgium, the Centre for Mathematical Plasma Astrophysics at KU Leuven (Belgium), and the School of Earth and Space Sciences of the University of Science and Technology of China. 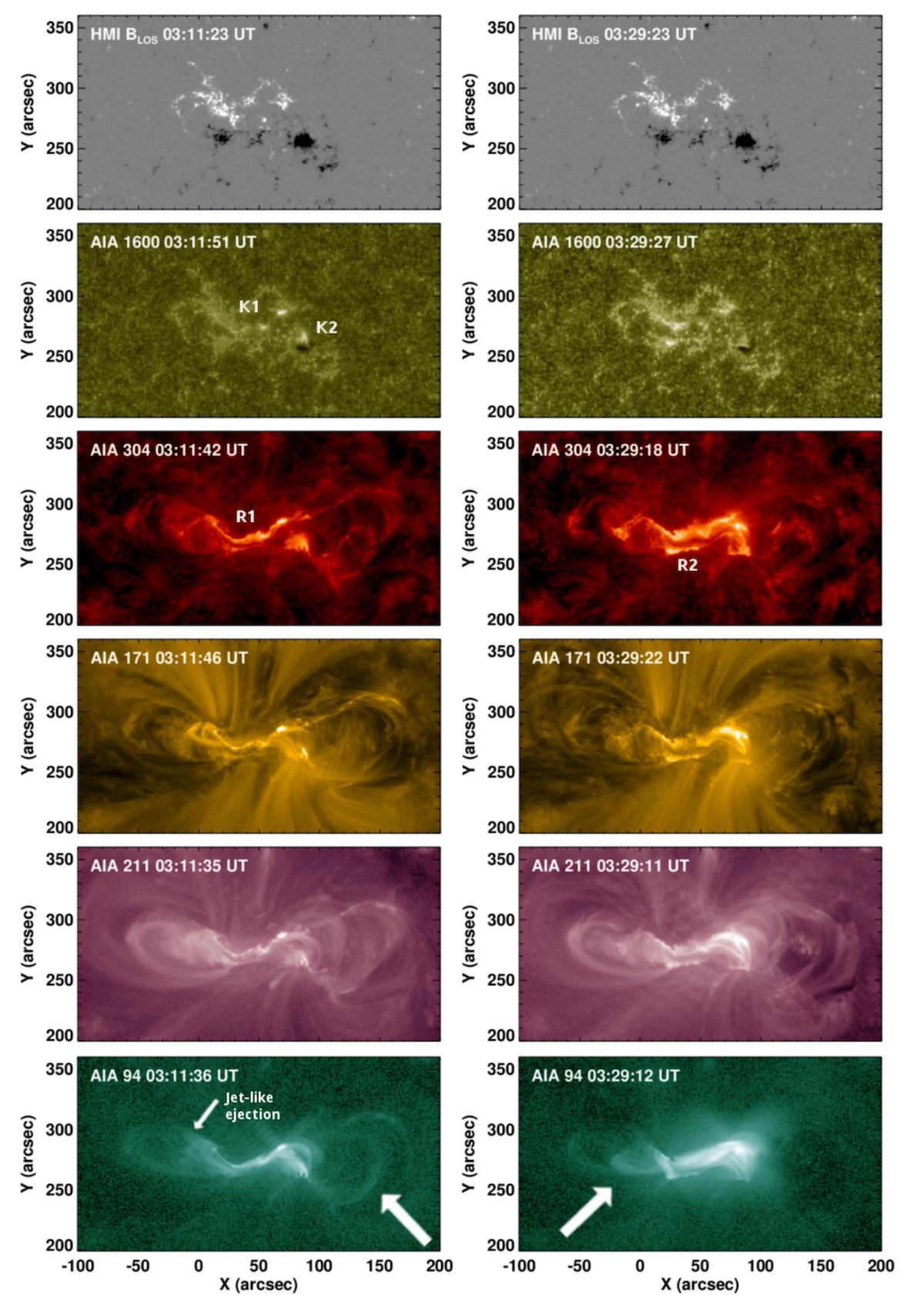 Image. Magnetic field and extreme ultraviolet emission during the extended impulsive phase of the solar flare on March 8, 2019. The panels in the two columns correspond to the two phases of the double-peak flare and two eruptions. Snapshots are shown at two time steps corresponding to the first (around 03:12 UT, left column) and the second (around 03:30 UT, right column) flare-related eruptions. Rows from top to bottom show line-of-sight magnetic field maps (data from the Helioseismic and Magnetic Imager — HMI), 1600, 304, 171, 211, and 94 angstrom filtergrams (data from the Solar Dynamics Observatory’s Atmospheric Imaging Assembly — AIA). The labels “K1” and “K2” in the 1600 angstrom AIA filtergrams refer to locations of flare kernels. The labels “R1” and “R2” in the 304 angstrom AIA filtergrams refer to the corresponding flare ribbons. The large white arrows in the 94 angstrom AIA filtergrams point to the location of the erupting loops during stages one and two of the flare process. The small arrow in the bottom left 94 angstrom AIA filtergram points to the location of a narrow ejection to the north-east during the first stage. Credit: from Dumbović et al., 2021