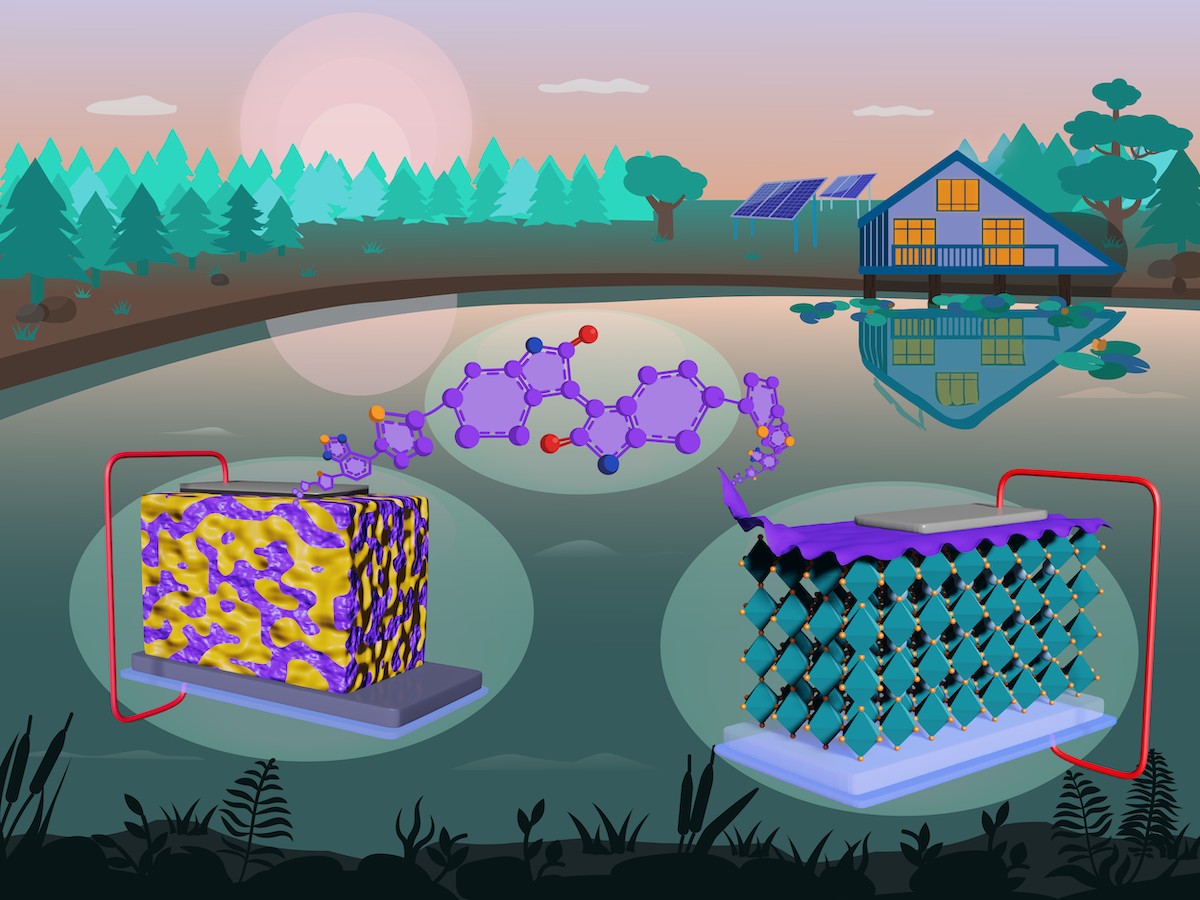 Image. Variation on the cover art of the Macromolecular Chemistry and Physics issue featuring the study reported in this story, both of the artworks by the study’s first author. Credit: Marina Tepliakova/Skoltech

Skoltech researchers and their colleagues have synthesized a new conjugated polymer for organic electronics using two different chemical reactions and shown the impact of the two methods on its performance in organic and perovskite solar cells. The paper was published in the journal Macromolecular Chemistry and Physics.

As the world tries to transition to clean and renewable energy, such as solar power, scientists are working on making solar cells more efficient at producing electricity. Among the promising approaches are two rapidly developing photovoltaic technologies with potential for inexpensive sustainable solar energy generation: organic solar cells and lead-halide perovskite solar cells. Their main advantage over the commercial solar cells based on crystalline silicon is the low cost of depositing the photoactive layer from solution. It makes energy production cheaper, simplifies scaling up with printing techniques and roll-to-roll manufacture, and enables device fabrication on flexible and stretchable surfaces.

However, there are several obstacles to the widespread adoption of these technologies. For one thing, the efficiency of organic solar cells still has a long way to go. This will require tweaking photoactive layer composition. In organic solar cells, the light-to-energy conversion occurs in the photoactive layer consisting of a mixture of donor and acceptor materials — the donor is usually a conjugated polymer.

As for perovskite solar cells, they have reached a spectacular 25.5% certified record efficiency, but long-term stability remains an issue. Recent research has shown that device stability can be improved by covering the photoactive perovskite material with a charge-extraction layer that provides efficient encapsulation. Among other materials, this protective function may be fulfilled by conjugated polymers, making it important to maximize their quality by improving their synthesis.

“Conjugated polymers have a variety of important applications, prompting us to investigate ways to optimize their synthesis to improve their quality, which would lead to a better performance of photovoltaic devices. Our study focuses on a particular type of conjugated polymers, which contain the isoindigo unit in the polymer chain. The findings demonstrate that between the two synthetic pathways applied for the synthesis of isoindigo-based materials, the Stille reaction should be given preference over the Suzuki reaction as the final step in the synthesis,” Skoltech PhD student Marina Tepliakova explained.

Together with Skoltech Provost Keith Stevenson and their colleagues from the RAS Institute for Problems of Chemical Physics, Marina Tepliakova synthesized a conjugated polymer based on isoindigo, an isomer of the well-known indigo dye. The team employed two synthesis pathways commonly used to produce isoindigo-based polymers: the Stille and the Suzuki polycondensation reactions.

Conjugated polymers are organic materials usually containing alternating donor and acceptor units in their structure, which is why they are also referred to as D-A-D-A-D materials. The D and A units, called monomers, are linked into polymeric chains using various polymerization reactions, each of which relies on the monomers bearing certain additional functional groups to begin with. For polymers incorporating the isoindigo unit as the acceptor component, two synthetic routes are available, and the study by the Skoltech-IPCP RAS team examined them both.

Besides the functional group distinction mentioned above, the two synthesis pathways are different in terms of the reaction conditions required. For example, the Suzuki polycondensation process requires that an inorganic base be present together with the two monomers in the mixture of immiscible fluids: water and organic solvent. Monomer transfer between phases is enabled by special molecules known as transfer catalysts. The Stille reaction usually occurs in one phase and at elevated temperatures. Additionally, both reactions require palladium-based catalysts.

“Our first observation was that the standard conditions of the Suzuki reaction were incompatible with isoindigo-based monomer synthesis,” Marina Tepliakova commented. “Using high-performance liquid chromatography, we observed monomer signal decomposition into three distinct signals of some byproducts with different retention times under the standard Suzuki conditions. This meant irreversible destruction of the isoindigo-based monomer was taking place. So we adjusted the reaction conditions until they were not harmful to the material.”

[High-performance liquid chromatography is an analytic technique that identifies components in a mixture by pumping it under pressure through a column filled with an adsorbent material. Since each compound in the mixture interacts with the adsorbent in a different way, it can be identified by its unique retention time — how long it takes for it to pass through the column.]

After tweaking the Suzuki reaction, the team went on to synthesize the polymer using both pathways. The resulting materials were found to have similar molecular weights and optoelectronic properties. Next, the researchers tested the samples in photovoltaic devices: organic and perovskite solar cells. The polymer obtained using the Stille reaction demonstrated superior performance with efficiencies of 15.1% and 4.1% in perovskite and organic solar cells, respectively; with the Suzuki-derived material delivering 12.6% and 2.7% efficiencies.

The team attributed the difference in performance to the presence of so-called charge traps in the material obtained using the Suzuki reaction. This assumption was confirmed using a technique called electron-spin resonance, which showed the material obtained via the Stille pathway had five times fewer defects.

By adjusting the approach to isoindigo-based monomer synthesis, the researchers have found a way to produce high-quality material that performs well in photovoltaic cells. In a follow-up experiment, the team is now synthesizing multiple materials to be tested in perovskite solar cells. That upcoming study will clarify how material structure relates to device performance.