A Skoltech professor and his Chinese colleagues have revised a key chemical concept, electronegativity, and determined this characteristic for all elements under varying pressures. The revamped notion of electronegativity provides a unified theoretical framework for understanding the numerous anomalies of high-pressure chemistry. The study came out in the prestigious journal Proceedings of the National Academy of Sciences of the USA. 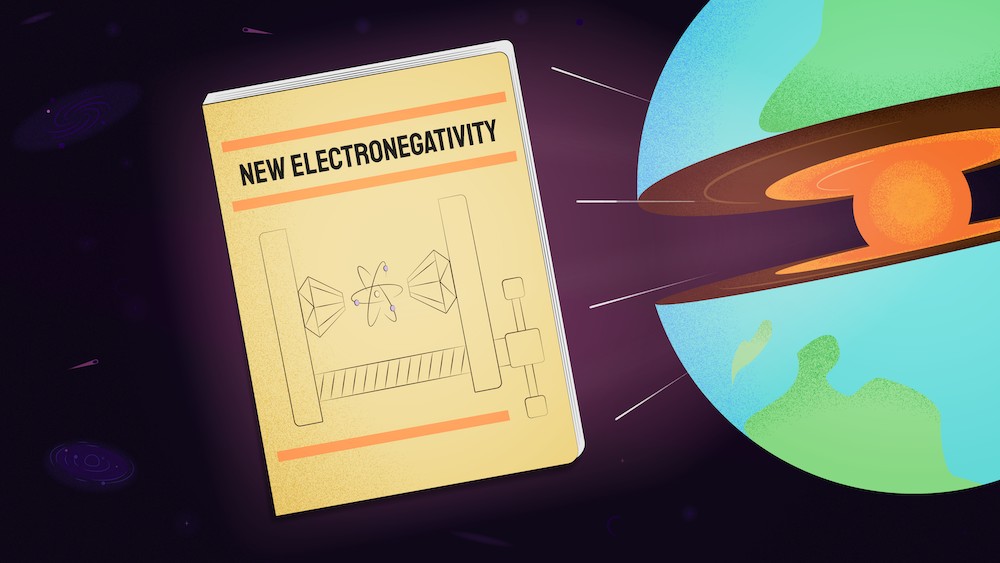 Electronegativity and the closely related notion of chemical hardness are two fundamental properties of chemical elements that largely determine what they react with and how. “Drop a piece of copper into a glass of water, and nothing much happens. Yet if you drop a piece of sodium into water, a violent chemical reaction ensues, generating enough heat to melt the sodium. The reason for this is sodium’s exceptionally low electronegativity: It is very eager to give up its electrons in favor of other atoms,” study co-author Skoltech Professor Artem R. Oganov comments.

Electronegativity is arguably the most important characteristic of a chemical element. Depending on whether it is low or high, it reflects the atom’s tendency to yield or capture electrons in chemical reactions. This property has meaning when seen in comparison: The more different it is for two arbitrary elements, the more vigorously their atoms react. This makes the electronegativity champion fluorine and anti-champion cesium two most reactive elements. They are so eager to react none of them is ever found in nature in its pure form.

The elements’ electronegativities give one a very reasonable idea not just of what reacts with what, but which type of a chemical bond will form and which properties the resulting compound will have. All of this only applies to chemistry under the standard conditions, though.

“We know an awful lot about how substances behave under atmospheric pressure, but come to think of it, this is not a typical situation at all,” Oganov points out. “Most of the Earth’s matter and that of other planets exists under enormous pressures — almost 4 million atmospheres at the center of the Earth, for example.”

Once researchers found ways to recreate such pressures in the lab (e.g., using diamond anvil cells) and model them on the computer (e.g., using USPEX, Oganov’s method for predicting crystal structures) — exotic phenomena that run counter to classical chemistry rules started cropping up one after another.

Namely, it turned out that at sufficiently high pressures:

— Every substance becomes a metal. Interestingly, the metal sodium first turns dielectric, at 2 million atmospheres, before metallizing again for good under even greater compression.

— The inert gases are no longer inert and do form compounds. Even helium!

— Potassium and some other elements give rise to strange nonperiodic structures, where some atoms form a framework and others assemble into chains running through channels in the framework. The periodicity of the framework and of the chains differs, and the overall structure therefore has no repeated unit cell.

— Many elements become electrides. That means they banish electrons into the lattice voids, endowing the crystal with peculiar properties.

— Unusually high valences are observed. Cesium and copper, for example, attain the valences of five and four, respectively.

— Copper and boron, magnesium and iron, and other combinations of elements that never react at atmospheric pressure do form compounds.

“These two parameters largely determine the chemical properties of atoms, and we set out to investigate how they vary as pressure grows. Since compression affects the electron configuration of an atom, it is only natural to expect its electronegativity to change accordingly,” Oganov says.

Mulliken electronegativity is computed from the ionization energy of an atom and its electron affinity energy. The former is a measure of how difficult it is to rip an electron from the atom, the latter reflects to what extent the atom is “willing” to grab an electron from the surrounding vacuum. Half the sum of these two values yields electronegativity, and half the difference between them is the element’s chemical hardness. Under standard conditions, they are very similar, because electron affinity tends to be very small. As a result, chemical hardness tends to be neglected. Things become different, though, once you step up the pressure.

“Under high pressures, these two parameters diverge and have different physical meanings. For a solid material, chemical hardness is the bandgap, which controls whether the material is a metal, a dielectric, or a semiconductor,” Oganov explains. “As for electronegativity, its meaning is the electron’s chemical potential in the atom — that is, the Fermi energy in the case of a solid. There are two caveats to calculating that value under pressure. First, pressure means no vacuum, so the standard definition with its reference to the potential of an atom’s ionization and affinity toward vacuum electrons is inapplicable. Hence, in our definition the atom exchanges electrons with the electron gas, not vacuum. Second, we replace ionization and affinity energies with enthalpies, which is essential for generating meaningful predictions under pressure.”

In establishing the electronegativity of all elements under pressure, the team faced challenges that went beyond theoretical intricacies. Oganov recalls one of the experimental difficulties: “Mulliken electronegativity is a property of an isolated atom in the vacuum, yet how do you put an atom under enormous pressure while still keeping it essentially isolated from outside influences? There is, however, a trick — we confined it in a cell of helium atoms, which are, well, as inert as it gets. Also, helium atoms are small, so the pressure is evenly distributed.”

Under helium pressure, the researchers measured the energy — or rather, enthalpy — of electron separation from and accession to the atom, using these data to compute electronegativity and chemical hardness. “This work was done on and off and took us almost seven years,” Oganov remembers. “As we began, Xiao Dong, the first author, was still a PhD student at my lab. By the time we were done, he was a professor. The study involved more than just hard thinking, it required a lot of exacting calculations — but this was all worth it.” The new scale of electronegativity and chemical hardness turned out to successfully account for the heretofore unexplained amazing phenomena of nonclassical chemistry.

Under increasing pressure, chemical hardness tends to decline. This translates into shrinking bandgaps and pushes every element to eventually become a metal.

Electronegativities, too, have the tendency to drop under pressure, meaning that the atoms become more willing to lose electrons. As the atom gets compressed, less space remains available for the electrons. At some point, they have nowhere to go and are banished into the lattice voids. This gives rise to electrides.

Calcium, barium, strontium, potassium, and sodium attain such low values of chemical hardness under pressure that their crystals undergo so-called disproportionation into atoms with distinct roles in the lattice, leading to the formation of weird nonperiodic crystal structures made up of a primary framework and secondary chains within it.

Even under extreme pressure, fluorine remains the uncontested champion in electronegativity. As for the most electropositive atom, remarkably, cesium is surpassed by sodium. “And at some point magnesium, too, when the pressure is high enough, which is a violation of the periodic law, because magnesium comes from another group in the periodic table,” Oganov comments on the results, adding that the immense electropositivity of sodium and magnesium under pressure makes them incredibly reactive.

In nickel, palladium, and platinum, the two topmost electron shells rearrange themselves in a way that creates a complete d-electron shell. Since complete shells are highly stable, these elements become more inert and cease to react with some of the atoms they normally form compounds with.

This same effect is of even more consequence for the elements in the neighboring groups that are suddenly just one or two electrons short of a complete shell — cobalt, iron, rhodium, ruthenium, osmium, iridium — making them almost as electronegative as iodine and tellurium. Conversely, their counterparts whom the rearrangement leaves with one or two “excess” electrons — copper, silver, zink, cadmium — become very electropositive, or rejecting toward electrons.

The difference in electronegativity between magnesium and iron under pressure gets as high as four times what it is under normal conditions. Copper and boron behave similarly. This leads to reactions between these normally nonreacting elements.

“We did lots of tests,” Oganov says. “And we can confirm that copper indeed readily reacts with boron and other elements. And cobalt and rhodium easily take away the electrons of many metals. We believe this might prove very important for geochemistry, affecting the behavior and fate of many elements in the interior of planets.”

“Another one of our observations: As chemical hardness drops, so does the degree of electron localization on bonds, resulting in so-called multicenter bonds. In fact, this is how exotic compounds such as NaCl7 emerge,” the first author of the paper, Professor Xiao Dong of ​​Nankai University, adds.

“Lastly, while it is still true that an atom will give up each successive electron less readily than the previous one, the lower electronegativity and chemical hardness values under pressure lead to this effect being somewhat less pronounced. This enables the existence of cesium with a valence of five, copper with a valence of four, and so on. So these eccentricities, too, follow from our revamped electronegativity scale,” the researcher concludes.

By revising two central concepts of chemistry, the authors of the study have managed to explain a host of puzzling phenomena in terms of a unified theoretical approach and generate new hypotheses with implications for geology, planetology, and other sciences.