Russian researchers and their international collaborators have developed a full-function bioelectronic photocell using one molecule of a fluorescent protein attached to a carbon nanotube. When exposed to light, the system can change its electronic properties and operate either as a spotlight or memory cell depending on how the protein is attached to the tube. The team’s findings open the door to new environmentally friendly electronic elements, memory devices, and solar cells. The research supported by the Russian Science Foundation (RSF) grant  was published in the journal Advanced Functional Materials. 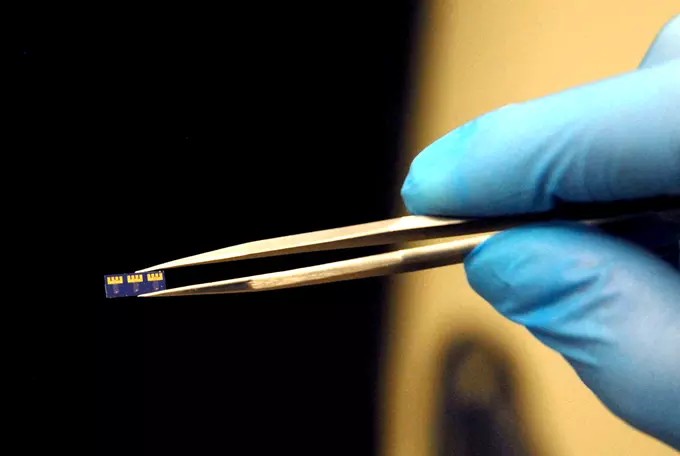 Optoelectronic devices capable of storing and transmitting information by responding to various wavelengths of light lie at the core of lasers, light emitting diodes (LED) and some memory devices. Of particular interest are hybrid systems that contain biomolecules, such as proteins, alongside electronic elements. Thanks to their low cost, environmental safety and good optical performance, hybrid systems can be used as components in molecular electronics, LEDs, advanced lasers, and optical transistors.

Researchers from the Moscow Institute of Electronic Technology (MIET), Lebedev Physical Institute of RAS and Skolkovo Institute of Science and Technology (Skoltech) in Moscow and their colleagues from UK, Finland and Serbia modified carbon nanotubes using the green fluorescent protein (GFP).

“In the configuration examined, a single-walled carbon nanotube (SWCNT) functions as an active conductor and carrier for a protein molecule, while the phenylazide group provides covalent crosslinking for common charge carriers between the device’s components,” Skoltech professor Albert Nasibulin, head of the Laboratory of Nanomaterials, explains.

Looking at the structure of the resulting compounds, the team found out that the protein can help control the type of the future optoelectronic element. Since the system can exchange both energy and charge carriers with the environment, the authors benefited from this capability to build new nanodevices.

“The carbon nanotube is indispensable for biomimic sensor structures, since it helps register even the slightest changes in the structure and the charge of individual biomolecules it is linked to,” Nikita Nekrasov, a postgraduate student at MIET, comments.

Carbon nanotubes have plenty of free electrons that can migrate to GFP and back via the phenylazide bridge. The researchers tried different GFP attachment options, placing the barrel upright or sidelong, to see how the photocell would behave. They discovered that if the protein was placed sideways with its water-repelling side attached to the tube, the entire system behaved like a spotlight controlling the tube’s conductivity. This happens because turning the excitation light on and off causes intensive exchange of electrons between the nanotube and the protein. However, if the protein’s water-retaining bottom was attached to the tube, the charge got caught between the nanotube and the protein, allowing the device to store information for dozens of minutes. At the same time, the element remained stable for a long time thanks to the protective protein shell.

“Our findings will help create powerful and compact light-controlled devices for information storage and transmission. In addition, both parts of our elements are biodegradable and, therefore, can be used for creating environmentally friendly solar cells,” Ivan Bobrinetsky, Doctor of Technical Sciences, RSF grant project manager and leading researcher at MIET, notes.