A group of Skoltech scientists led by Professor Evgeny Nikolaev in collaboration with colleagues from MIPT, Engelhardt Institute of Molecular Biology of RAS, and Emanuel Institute of Biochemical Physics of RAS has overviewed how mass spectrometry techniques help to study the diversity of beta-amyloid peptides, which are among the main biomarkers of Alzheimer’s disease. Their paper summarizing recent achievements in the area was published in Mass Spectrometry Reviews and mentions the researchers’ previous study, where using novel mass spectrometry methods they found a new potential trigger for the accelerated formation of amyloid plaques in the brain, which are considered to be one of the causes of Alzheimer’s. New MS-based technologies should help better understand the pathogenesis of the disease, diagnose it at early stages, predict risks, and create more effective therapeutic approaches. 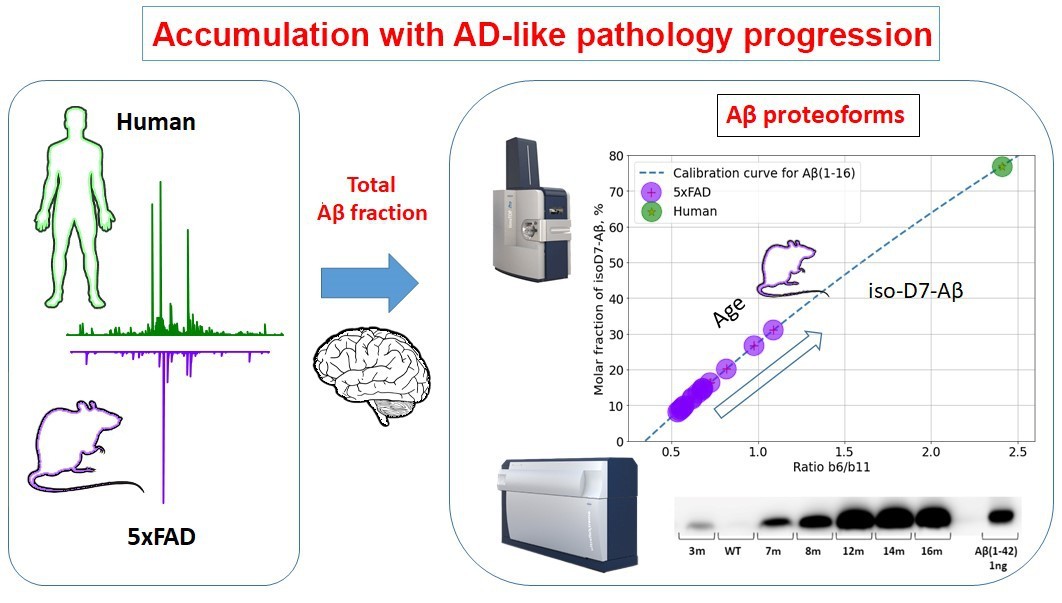 Experiment scheme and the results of the study: transgenic mice with Alzheimer’s disease-like beta-amyloid plaques in the brain. The degree of isomerization of beta-amyloid peptides (vertically) is determined by the intensity of the mass spectrometric signal (horizontally). The results obtained for the human brain (green dot) are consistent with the results obtained for the brain of transgenic mice (purple dots). Credit: Alexey Kononikhin

Alzheimer’s disease is the leading cause of dementia and the most socially significant neurodegenerative disorder among the elderly. AD is characterized by the deposition of beta-amyloid peptides in the form of senile plaques. Although the mechanism of the disease is not yet fully understood, scientists believe that the formation of plaques is one of its causes.

Beta-amyloid (Aβ) peptides are formed by cutting out chunks that are 39 to 42 amino acid residues long from the so-called amyloid precursor protein, which sits in the cell membrane. The resulting Aβ peptide isoforms vary in length and have different biochemical properties. Besides their length, the peptides also differ due to post-translational modifications, or PTMs. These are changes affecting the chemical properties of amino acids that occur after the protein has already been synthesized. It turns out that some ‌PTMs make for Aβ peptides that are especially prone to plaque formation — these are found in high concentrations in the senile plaques of AD patients.

Monitoring the diversity of Aβ peptides may help diagnose the disease more accurately and keep an eye on its progression. Mass spectrometry is the most accurate and precise way to analyze the various types of beta-amyloid peptides.

“We wanted to highlight the capabilities of mass spectrometry methods for Alzheimer’s disease investigation and diagnostics. In the review article, we present the achievements of our own and other groups in this area,” explains one of the authors, Skoltech Senior Research Scientist Alexey Kononikhin. “Mass spectrometry allowed us to reach a new level of understanding of the complexity of beta-amyloid peptides, which occur in a great variety of isoforms throughout the body. We showed that their composition changes in Alzheimer’s disease, and detecting some isoforms of peptides — for example, in a patient’s blood sample — can even enable early prediction of AD.”

Mass spectrometry is an analytical technique widely used for the analysis of peptides and proteins. It provides information about a biological sample’s composition in the form of a mass spectrum, which reflects the relative abundance of components with different masses, or rather with different mass-to-charge ratios, to be precise. Since amino acids differ in mass, accurate measurements of peptide masses and those of their fragments make it possible to tell one Aβ peptide from another and even recognize PTMs.

“Thanks to mass spectrometry, the diversity of various forms of these peptides has been confirmed. This expands our understanding and vision of what is happening: We see not just lots of Aβ peptides, but a whole complex picture. The method works well not only for understanding the pathogenesis of Alzheimer’s but also for better diagnostics, especially at early stages,” Kononikhin adds.

Unlike the usual PTMs, amino acid isomerization, which is of particular significance for AD, does not change a peptide’s mass and, therefore, its presence is trickier to detect. In the case of beta-amyloid peptides, spontaneous isomerization of the seventh amino acid in the sequence — the aspartate residue — is of special interest. This modification is often present in the plaques of AD patients and is considered a potential trigger for Aβ accumulation.

“We developed a quantitative mass spectrometric method for isomerization detection and studied the dynamic accumulation of peptide forms. We have compared for the first time beta-amyloid peptides from human AD brain tissue and transgenic mice with AD-like symptoms. We saw that the degree of Aβ peptide isomerization in plaques increased with mouse age. And the dynamics of this accumulation is quite interesting. For example, from the seventh month, the content of the isomerized form increases, and starting from 10 months of age, the plaques themselves form rapidly. Thus our findings confirm in part the hypothesis that isomerization may act as a trigger for plaque formation, but further experimental evidence is needed,” Kononikhin says.

These results demonstrate that mass spectrometric studies of AD plaques can become an effective tool with high sensitivity and specificity, suitable both for validating the results obtained by other methods and for discovering new forms of Aβ peptides. Analyzing how their content varies is of particular importance for elucidating the pathogenesis of Alzheimer’s disease, predicting the risk of its onset, and developing effective therapy.