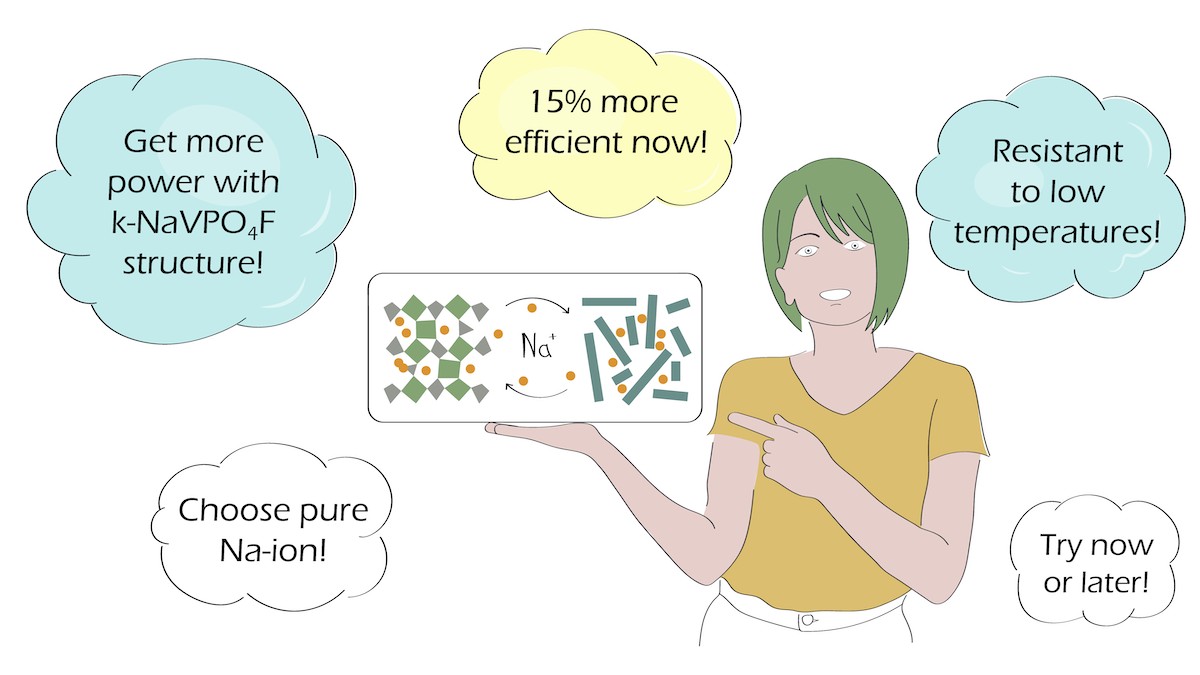 With lithium prices over five times higher than they were a year ago, researchers from Skoltech and Lomonosov Moscow State University have developed a material for sodium-ion batteries, which offer an alternative to the increasingly expensive lithium-ion tech. The new material is a powder of sodium-vanadium phosphate fluoride with a particular crystal structure. Used in the battery cathode, it provides record-high energy storage capacity, eliminating one of the bottlenecks of the emerging sodium-ion technology. The research findings are reported in Nature Communications.

Lithium-ion batteries are everywhere: Among other things, they power portable electronics and electric vehicles, and store the energy produced by wind farms to even out irregular wind patterns. However, relying on lithium alone is risky, because its chemicals are growing ever more expensive, their production is rather dirty, and the ore deposits are unevenly distributed around the world. One step down in the periodic table, the much more abundant alkali metal sodium lends itself as a possible alternative to lithium.

So far the sodium-ion battery tech is relatively new, and while the basic architecture of the battery cell is the same, different materials have to be used for the principal components. Among them, the cathode is crucial for battery characteristics. In their recent paper, Skoltech and MSU researchers came up with a new cathode material that ensures 10%-15% better battery energy density than the current top contender.

“Both our new material and the one the industry has recently deployed are called sodium-vanadium phosphate fluoride — they’re made of atoms of the same elements. What makes them different is how those atoms are arranged and in what ratio they are contained in the compound,” study co-author, Assistant Professor Stanislav Fedotov of Skoltech, said.

“Our material also compares well with the class of layered materials for cathodes: It provides roughly the same battery capacity and greater stability, which translates into longer life and higher cost-efficiency of the battery,” Fedotov went on. “Remarkably, even the theoretical predictions for the competing materials fall short of the practical performance of ours, and this is far from trivial, because the theoretical potential is never fully realized.”

According to the scientists, once more research into efficient materials for sodium-ion batteries is conducted, they might well supersede lithium-ion accumulators in heavy electric vehicles, such as buses and trucks, as well as in stationary energy storage at wind, solar farms and elsewhere.

“Higher energy storage capacity is just one of the advantages of this material. It also enables the cathode to operate at lower ambient temperatures, which is particularly relevant for Russia,” Fedotov said.

Semyon Shraer, a research intern at Skoltech and the lead author of the paper, shared the origins of the idea behind this study: “In fact, the battery community tends to proceed with the search for new materials either empirically — by trial and error — or with high-throughput studies that test vast arrays of materials. We approach it differently and favor rational solid-state chemistry design. That means we rely on hard science, using the fundamental laws and principles of solid-state chemistry to arrive at the material with desired properties.”

“Theoretical considerations led us to the basic formula for a material that might provide high energy storage capacity,” he went on. “We then needed to determine which crystal structure would unlock that potential. The one we chose is known as the KTP-type framework, and it comes from nonlinear optics — it’s not really common for battery engineering. After careful thinking and theoretization we realized that this particular compound with that particular crystal structure should work. Then we managed to synthesize it via low-temperature ion exchange. And there it is, with its superior characteristics now confirmed by an experiment.”

The research reported in this story was supported by Russian Science Foundation Grant No. 20-73-10248.