A Skoltech research team led by Professor Artem R. Oganov found out why some hydrocarbons are abundant in nature and easy to synthesize, while others are not. They used “magicity” as a measure for assessing the stability of molecules with respect to molecules of only slightly different compositions. This approach helped build a stability map that is in good agreement with experiment and predicts new potentially synthesizable molecules. The paper outlining the results of this study appeared in The Journal of Physical Chemistry Letters. 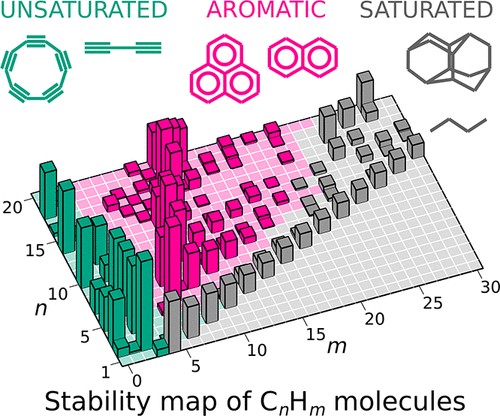 Stability map of hydrocarbons with 1 to 20 carbon atoms (n) and 0 to 30 hydrogen atoms (m). The column height represents the degree of the molecule’s “magicity”

Hydrocarbons are compounds of carbon and hydrogen with a general formula, CnHm, where n and m are the number of carbon and hydrogen atoms, respectively. Hydrocarbons are a major class of organic molecules and are startlingly numerous. Yet, some are more common and easier to synthesize in the experiment, while others can only be obtained through ingenious chemical tricks. It was not quite clear why this is so.

“The textbook of organic chemistry with its haphazard multitude of different molecules looks scary. No one has a clue as to why some molecules exist and some don’t. You can learn a lot about each specific molecule if you draw its chemical structure using “sticks” to depict the bonds between the atoms, but in reality, many concepts related to this still remain a subject of debate and fail to answer the question “Why?”. “Sticks” are nothing more than a handy abstract tool, while the rigorous stability criterion for compounds is energy,” lead author of the study, Sergey Lepeshkin, explains.

In their new study, the researchers looked at the chemistry of hydrocarbons from a theoretical perspective, using energy values of various compounds as a reference. Stability depends much less on the molecule’s absolute energy than on its energy relative to the average of the energies of its neighboring compounds with one atom (of each type) more and atom less. The authors used the “magicity” concept previously proposed for nanoparticles to pin down the most stable compounds. A molecule is “magic” if it is more stable than an ensemble of its neighbors in the chemical space.

The researchers performed calculations and ran a “magicity” test on a wide range of compounds with the molecule comprising up to 20 carbon and 42 hydrogen atoms. For this purpose, they used the USPEX algorithm (Universal Structure Predictor: Evolutionary Xtallography) previously developed by Oganov and his team. This algorithm simultaneously predicts structures with minimum energy for each composition, making different molecules to compete and exchange structural information with each other. Once the tool had got the energies for all the compositions, it automatically identified “magic” molecules, producing a stability map for all the hydrocarbons within the specified range of compositions.

“Now we have got the entire chemistry of hydrocarbons within one map. Remarkably, the “stability ridges” represent the homologous series from our schoolbooks, which are essentially series of compounds with regular changes in composition, structure, and properties. The map clearly shows which molecules are easy to synthesize and which can form spontaneously and accumulate in large concentrations. For example, the map makes it clear why some of the compounds exist in planetary atmospheres and interstellar space, in flames and in oil deposits. Finally, the map can predict the compounds yet to be found. Of much interest are those that already exist but are not “magic”. The most striking examples include cyclopropane that chemists believe to be unstable due to strained bonds with non-optimal angles, butadiene which is known to be highly active and its propensity to polymerization is used in the industrial production of rubber, and an iconic molecule, cyclobutadiene, that took a good 30 years to synthesize,” Oganov concludes.

Thus, the researchers have shown that an energy-based criterion helps decide whether a molecule is stable or not and offered a perspective on the amazing diversity of hydrocarbons and organic chemistry as a whole. They have come up with a universal method that can be used for stability analysis of any other class of molecules.