Researchers from Skoltech and Harbin Institute of Technology have devised a system of optical sensors with aluminum coating that could withstand the harsh conditions inside a distillation tower — an industrial facility for separating crude oil into gasoline, diesel fuel, etc. — and monitor its structural health, avoiding the need for ineffective sweeping repairs and enabling timely targeted interventions when and where problems arise. Published in Optics Letters, the study is an example of a successful collaboration between BRICS scientists. 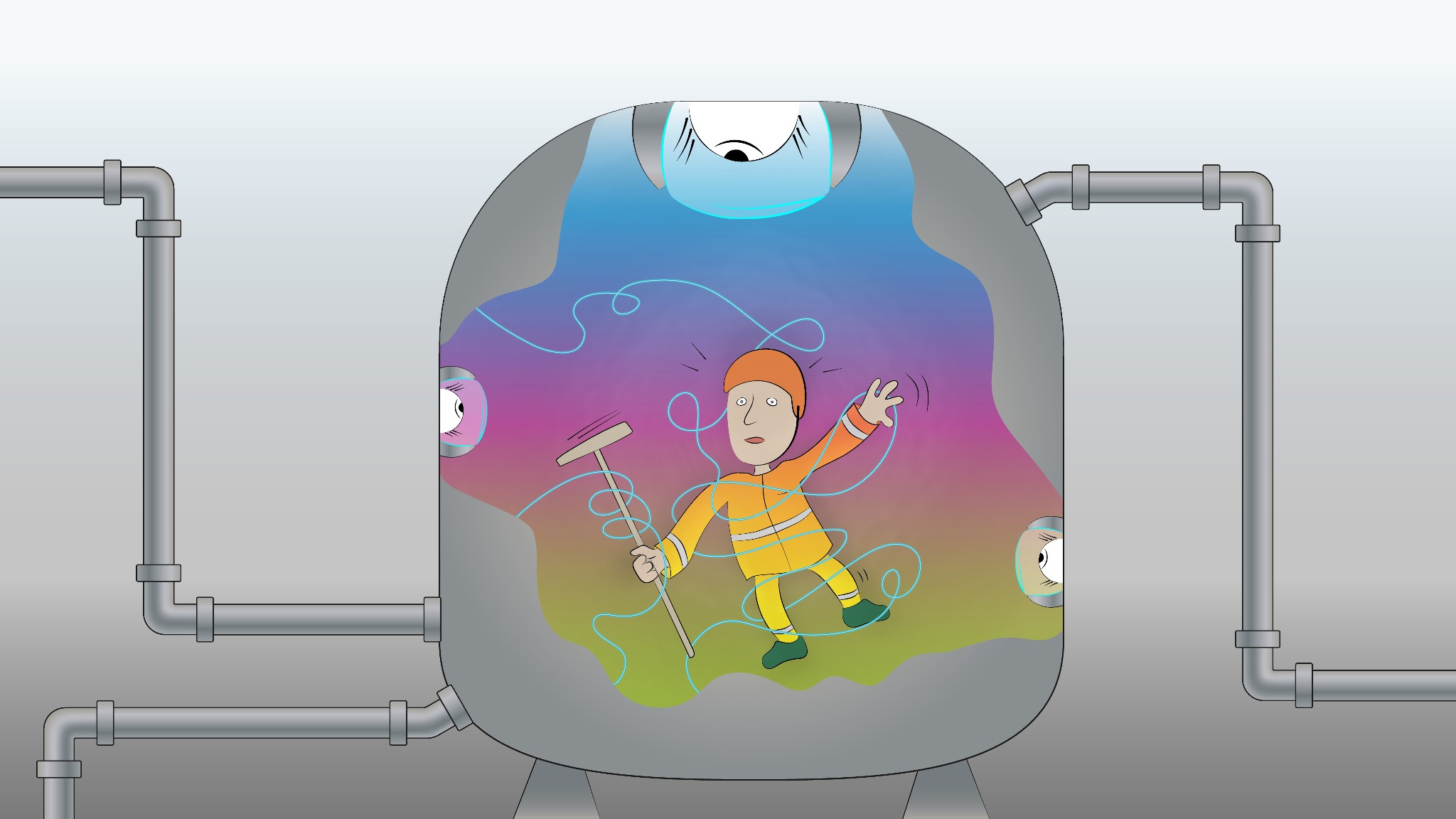 … it’s like a big black box that keeps working fine, until it doesn’t. And then you have to literally cut the metal open and deploy a guy with a mop inside, who takes a look around, cleans up the whole thing, and hopefully everything works again” — researchers propose putting optical sensors inside oil distillation towers. Credit: Pavel Odinev/Skoltech

“Information society is approaching a point where every household appliance and industrial facility will be sending out round-the-clock reports on what it is doing and how it is ‘feeling.’ You might not necessarily always need this information, but it will be out there, and one of the promising ways of using it is structural health monitoring. That is, tracking the internal state of the constituent parts of bridges, pipelines, aircraft, and so on to pinpoint anticipated failures and enable targeted interventions, saving much resources and minimizing downtime. It’s a whole new take on repairing stuff,” study co-author and Skoltech Associate Professor Arkady Shipulin from the Institute’s Photonics Center commented.

This highly effective approach to maintenance relies on sophisticated sensor systems embedded into structures and vehicles. Optical sensors, in particular, are the focus of the Skoltech-Harbin study, which attempts to address a challenge faced by the oil industry.

In general, optical sensors are the technology of choice for perimeter control, monitoring long-distance infrastructure, such as power lines or, say, undersea gas pipelines, as well as for the facilities used in oil refining and storage, where electronics are inapplicable due to combustion and explosion hazards. These include distillation columns — large towers for separating petroleum into its useful components, called fractions — and oil tank reservoirs, such as the one whose failure led to the 2020 diesel spill near Norilsk, Russia.

“We were approached by a company that wanted us to develop a sensor system that would report what’s going on in a distillation tower. You see, it’s like a big black box that keeps working fine, until it doesn’t. And then you have to literally cut the metal open and deploy a guy with a mop inside, who takes a look around, cleans up the whole thing, and hopefully everything works again — not much of a high-tech solution, really,” Shipulin said.

No one has ever put sensors inside a distillation tower, because of how harsh that environment is. Together with his Chinese colleagues, Shipulin’s team developed a concept for an optical sensor system that is not merely capable of collecting the necessary data but would actually survive the tower’s hot temperatures and aggressive chemicals. The crux of the problem is that the optical fiber has to be both shielded from the environment for protection and sufficiently exposed to it for sensing.

“It’s a bit of a contradiction, you see,” Shipulin said. “What material do you coat the glass fiber with to protect it without entirely walling it off from the acoustic waves outside? Metal coatings have been used for a long time, but mostly where the optical fiber serves as a transmission channel sealed off from the environment to prevent deterioration. Once it has to function as a sensor, impedance matching is key.”

The impedance of a material characterizes how acoustic (in this case) waves propagate in it. The researchers considered how a mismatch between the impedances of glass and the metal coating affects to what extent incoming acoustic waves are reflected back into the environment and thus are not “felt” by the sensor. The team then sought out a material whose impedance matches that of glass as closely as possible without driving the cost of the coating through the roof: aluminum.

Now that the problem of how to protect but not isolate the optical fiber from the environment has been tentatively resolved, the researchers can move on to a few similarly specific tasks before testing the entire sensing system as a whole in the lab. This work is planned both in the form of bilateral contacts, as in this Russian-Chinese study, and within the framework of a broader BRICS-based collaboration, whose importance is currently increasing.