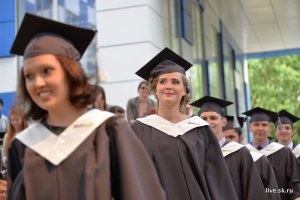 Skoltech graduate Anna Dubovik: “I want to prove that a Skoltech alumna is a person ready to impact the world”.

When Anna Dubovik got on stage to deliver an address on behalf of fellow students at Skoltech’s first graduation ceremony, those who knew her – and many in the 300-strong audience did – expected smiles. The affable go-getter certainly did beam with her by-now-trademark good vibes.

But then the IT program graduate proceeded to reminisce about how before joining Skoltech, her mother had worried whether the young student-to-be should bet on the nascent university. “My mom was a little skeptical. Eventually she only asked that whatever I choose, I should be resolute in seeing it through, be a fighter”, Dubovik took a breath.

”Well, I did exactly that. And it was worth it: I got my degree, and I got to learn from and work with outstanding researchers, I got some amazing friends. But most of all,” tearing up, she looked around at the crowd gathered at the inner courtyard of Skoltech’s new building, “the strong, smart women that I discovered at Skoltech inspired me to challenge myself every day.”

Echoing this emotion, the university’s president, Prof Ed Crawley, quoted a fellow researcher from MIT and stressed the importance of what he called “heart”. Emotional drive and passion, said Crawley, are the forces that make or break a young research institute. Judging science and innovation by numbers only is not enough.

Having said that, guests at the commencement ceremony – such as Russian first deputy Prime Minister Arkady Dvorkovich who serves as the institute’s Chairman of the Board of Trustees – as well as the university’s leadership, know that key stats and KPIs do play an important role.

Fifty two master’s students in IT, Energy, Space, and Advanced Manufacturing are expected to graduate from Skoltech by the end of 2015. The inaugural group of students, some of whom joined the innovation-focused university as early as 2012, hails from 15 countries. Thirty five percent of all graduates are women, and almost half of the graduating students were actively involved in startup projects or established their own companies during their time with Skoltech. A majority studied and worked at the Massachusetts Institute of Technology (MIT), honing their skills as researchers and entrepreneurs – and their English.

And now, having celebrated their achievements with the likes of Russian PM Dmitry Medvedev, students and staff feel it is time to give back to the organization.  Dmitry Smirnov, one of six students who collected “Outstanding Thesis Awards” for scientific excellence, announced the establishment of an Alumni Association tasked with administering a student Startup Project Challenge and a million ruble award . A third of the sum was collected by Smirnov and his colleagues. Skoltech leadership raised a further four million rubles for a student grant scheme and, closing the ceremony, Prof Crawley announced the establishment of a ‘best teacher award’ in honor and memory of his father. 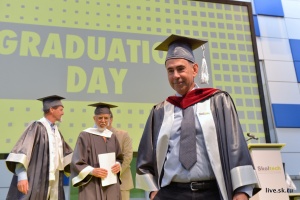 President Crawley: the importance of “heart”

Smirnov believes that “the one big advantage we Skoltech students had over anyone studying in traditional Russian universities is that we worked on our projects in flexible teams. The other is that the curriculum and internships constantly pushed us to embrace a simple truth about applied research – it has to provide value, to produce a high return on investment.”

Equipped with this ambitious-yet-realistic approach he now hopes to become a serial entrepreneur in the up and coming field of “Internet of Energy”. Smirnov will stay on in Skoltech as a PhD student with Prof Alessandro Golkar of the Strategic Innovation Research Group (SIRG.)

While some graduates envision an academic career combining entrepreneurship and research, others plan to join established companies (Intel and Cisco are two coveted destinations) or work with public organizations. Dubovik, along with two other IT grads is starting to work at the Data Analysis Laboratory recently launched by Moscow City’s departments of Healthcare and Information Technology.

“Our main aim is to apply data analysis to provide government officials with insights leading to decisions that improve life in Moscow”, she says, “I want to prove that a Skoltech alumna is a person ready to impact the world in the long run”. 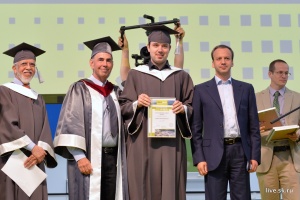 Andrii Omelianovych (center): “I want this university to be proud of me”

Then there are those who dream to build the next unicorn startup. Enter Andrii Omelianovych, another Outstanding Thesis Awards’ laureate, plans to stay on at Skoltech as a PhD student with the institute’s Electrochemical Energy Storage research center. These days Omelianovych is launching a shared ride startup called Sharxi, along with fellow graduate Boris Urman.

“Skoltech brought to my life a culture of perseverance and encouragement”, he explains. “Trials, errors, failures are all learning experiences. Then you start all over again until you achieve something real. Now I am going through a similar process, but in the real world. I want my startup to optimize transportation in Moscow”.

That sounds like a big load on your plate.

“Yes. But having big ambitions is something I learned at Skoltech. I want this university to be proud of me”. 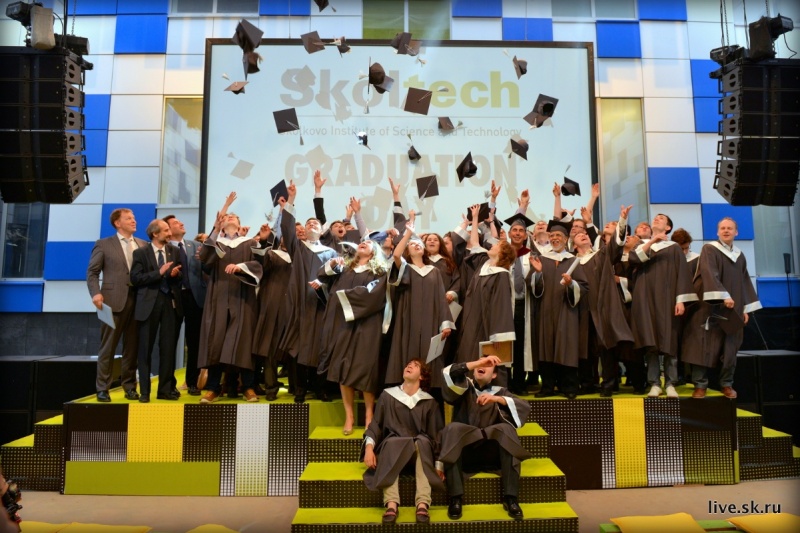