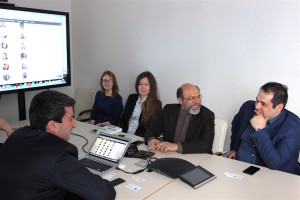 Alexey Sitnikov, Skoltech’s Vice President for Institutional and Resource Development, introduced Skoltech’s areas of expertise to the Iranian delegation and told the guests about the partnership programs with Russian and foreign universities. After the meeting, the guests from the Islamic Republic of Iran were taken on a demonstrative tour in several labs.

The particular interest of Mr. Mirzade was driven by Skoltech’s experience in the field of technology transfer and cooperation with industrial partners. The second most important direction, which could become the basis for cooperation between Skoltech and the University of Azad, was improving the quality of teaching in the Iranian university by directing its undergraduates to study at Skoltech, as well as the participation of Skoltech professors in the curriculum of the Iranian university. 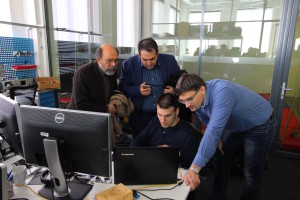 Prof. Dzmitry Tsetserukou shows the Iranian guests the capabilities of his robotics lab.

Founded in 1982 in Tehran, the Islamic Azad University is the largest private institution of higher education in Iran and the Middle East. It has about 1.7 million. students around the world. The faculty of the University consists of more than 44,000 employees. The University has 28 research centers. The University has 400 offices in Iran and abroad. Today, its branches exist in countries such as the United Arab Emirates, Afghanistan, UK, Tanzania, Lebanon and Armenia.

Azad University has a number of partners in joint educational and research projects include such universities as the University of Gothenburg and Ottawa, University of Rome La Sapienza, the Moscow Mendeleev Institute of Chemical Technology,  University Consortium for Political Studies in Lyon and Grenoble, the Marc Bloch University (Strasbourg), Charles University in Prague, Technical University of Dresden and many others. It is an indispensable participant in scientific Olympiads, including international robotics competition (RoboCup).