This year, for the first time within the qualification for the Master’s program hosted by UMNIK selection program, it went only in the field of the biotechnology and biomedical problems. In addition, all procedures were conducted in English. This is a pilot project, which is planned to be spread to other areas of Skoltech’s Master’s programs next year. 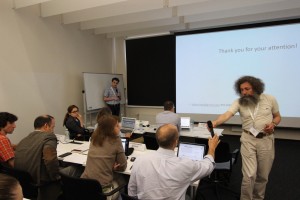 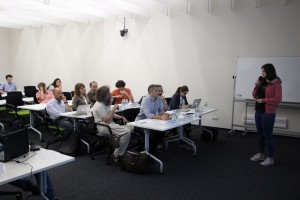 “UMNIK” – the Russian abbreviation of “Member of Youth Research and Innovation Competition” – was organized by the Foundation for Assistance to Small Innovative Enterprises in the scientific and technical sphere. Its main purpose is to identify young researchers who want to realize themselves through innovation. Another important point is to encourage mass participation of youth in science, technology and innovation through organizational and financial support for innovative projects. Accredited universities, institutes and other organizations hold such contests on their sites in two phases – during spring and autumn.

Skoltech’s first full selection of UMNIK program took place in December 2015. The decision to include UMNIK as part of Skoltech’s selection process for Master’s program, was taken jointly with the Skolkovo Foundation.

Based on the theme of the competition, this year’s winner was chosen by the jury, which consisted of prominent representatives of modern science and leading experts in the field of biotechnology and biomedicine – Skoltech Professors Mikhail Gelfand, Philipp Khaitovich, Georgii Bazykin, Yuri Kotelevtsev, Olga Dontsova, Dmitry Papatsenko; Representatives of “Bortnik Fundation”, including Ivan Bortnik himself, representative of the “Skolkovo” Foundation expert Yuryi Nikolsky, and Dmitry Pebalk, Skoltech Innovation Program manager.

Out of six final projects which were presented, three were declared as winners. And the winners are:

– Artem Mikelov’s project “Development of new methods and software for the diagnosis of allergic diseases, and assessing their development risk on the basis of analysis of individual repertoires of B-cell receptor using next-generation sequencing technologies”

– Ekaterina Kozhaeva’s project “Development of complex bacteriophage-containing mouth rinses, aimed at users of bracket system for the prevention of caries and associated diseases”

The winners will receive a two-year grant, which must be spent on the proposed implementation of scientific and technical ideas. The winners will be given the opportunity to work on their projects using Skoltech’s laboratories.