The first performance of a Skoltech team in the most important global forum of computer technologies – SIGGRAPH 2016 Emerging Technologies – turned into triumph. 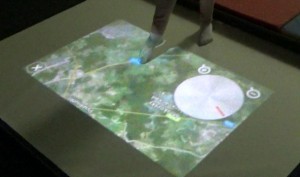 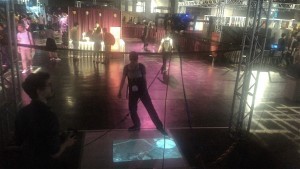 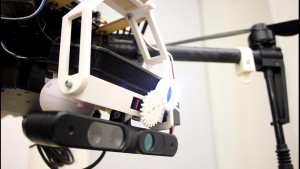 SIGGRAPH (Special Interest Group on Graphics and Interactive Techniques) is an annual conference on computer graphics led by ACM SIGGRAPH since 1974. The forum hosts tens of thousands of professionals in the computer industry, representing leading companies, research centers and universities. Projects presented at SIGGRAPH pass strict competitive selection before they are included into the list of demonstrations. Being included in this list it is considered as a great success.

Skoltech team – Evgeny Tsykunov, Mikhail Matrosov and Olga Volkova, led by Professor Dzmitry Tsetserukou – participated in the conference for the first time and presented LightAir project – a new system of Tangible Communication with drone quadcopter by feet gestures. The team was awarded with the Laval Virtual Award, by the French consul in Los Angeles, Mr. Christophe LeMoine.

With the award, the LightAir project team members were invited to participate in the at the Laval Virtual forum next year. This forum, which is annually held in France, is the largest European forum of computer graphics and interactive technologies.

LightAir is the revolutionary project – a radically new concept of interaction between man and a drone. Until now, the only way of interaction was broadcasting commands by radio using a controller. The Skoltech team developed a new interactive way to interact with a visual channel and 3D-sensors that scan the space in front drone and recognizing human gestures. To apply a command, one should only “click” with his foot on the image projected by the drone on any solid surface, whether horizontal or vertical.

Skoltech team introduced three existing applications for the system: FlyMap – a GPS-navigation and control app for drone deliveries. It enables a delivery drone to project a scalable map that indicates the destination. Upon approval, the drone calculates and displays the speed and flight time, takes the package and performs its delivery. When arriving at the destination point, the drone projects the delivery content and other information to the recipient. With a foot “click”, the recipient can approve or reject the delivery.

The other two applications are dedicated to the subject of official SIGGRAPH theme this year – “Augmented Sport”. Do you remember the piano scene from the movie “Big”? Instead of a physical keyboard, the Skoltech team presented a virtual one. The drone projects image of it on the ground as a man jumping on the keys to play the melody. A particular challenge in the implementation of the program represented a large volume of information required for accurate detection of the surface, legs playing position, the vector direction of the foot and holding the position of the drone from the point cloud.

The third application is an interactive “Pong” style football game. The drone determines the position of the player and his legs, and projects the image of the ball is moved to the point where it “whacks” the player to catch and respond.

Dzmitry Tsetserukou: “Firstly, I would like to congratulate the whole team – Evgeny Tsykunov, Mikhail Matrosov and Olga Volkova. During the year, the team did a great job and we were able to show the completed project. During the preparation for the demonstration, the team has successfully solved a number of challenges – from the presentation itself, held perfectly, software writing, to security issues of showing the drone in the limited space of 20 square meters.
We are very happy about this successful debut. This is a very prestigious conference – №1 in computer graphics and interactive technologies. Prior to this, my projects only participated in SIGGRAPH Asia, but in the main part, the international SIGGRAPH is a new and much higher level. Each year, SIGGRAPH involved the best universities in the world, which still has to undergo a serious selection – only 20% of applications for approval is obtained. To present the SIGGRAPH level of participants, it’s enough to say that the demonstration of our LightAir project was in line with the presentations of Tokyo and Stanford Universities, INRIA, University of Tsukuba, the Max Planck Institute, the University of KAIST, Oculus, NVIDIA, Sony and others.Starting from now, I can say that I have successfully built the world level Robotics laboratory in Russia from scratch!
Most importantly, we have demonstrated that the technology is not only revolutionary, but close to commercial deployment. I think that in the next three or four years we will see its application in the automated delivery, city navigation and gaming services. “