Skoltech PHD student Sergey Shmakov in Prof. Konstantin Severinov research group will receive National Institutes of Health (NIH, Bethesda, USA) Director’s award for his work on CRISPR-Cas systems. The ceremony will take place on the 19th of July in the Ruth L. Kirschstein Auditorium at the Natcher Conference Center. 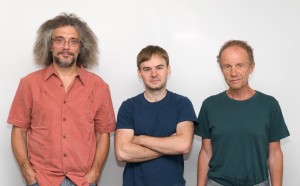 NIH Director’s award is an annual award for researchers and employees in clinic, who demonstrated superior skill and leadership in science, exceptional performance beyond regular duty requirements in carrying out a difficult task, for discovery or invention of a new principle, process or device of a scientific nature resulting in substantial benefits and other big contributions in science and NIH work.

Sergey Shmakov was awarded for his contribution to new CRISPR -Cas systems research. In one of the latest discoveries scientists proposed CRISPR-based RNA targeting approach (C2c2 system) may allow researchers to make temporary changes in cells. It is an option to precisely manipulate RNA. In prospective it can be a very powerful tool in cellular manipulation.

“Skoltech Master and PhD students undergo training in the world’s best labs and acquire unique skills and connections. At the same time they contribute a lot to the ongoing work. For example our PhD student Sergey Shmakov predicted and discovered C2c2 system and a number of other completely unknown CRISPR-Cas systems using purely bioinformatic approaches. Then it was confirmed experimentally in the Feng Zhang lab at MIT and in my lab at Rutgers University” told prof. Severinov.

CRISPR-Cas9 technology is revolutionizing the field of genomics. “CRISPR” stands for Clustered Regularly Interspaced Short Palindromic Repeats, which are key components of a system used by bacteria to defend against viruses. Cas9 – one of the enzymes produced by the CRISPR system – binds to DNA in a highly sequence-specific manner and cuts it, allowing researchers to target specific regions of the genome and edit them, curing mutations.

“I started as a Computer Scientists in BMSTU and in Microsoft Russia (as software development engineer) later. After finishing modeling course in BMSTU I stuck on one question: Why we can model plasma fields, but not living organisms?

This question lead my way to ShAD (school of data analysis in Yandex, on bioinformatics department). There I become curious and intrigued about how the things work in cells. Reading Molecular Biology of the Cell was more like reading detective story. During ShAD program I had a summer project with Konstantin Severinov. We had good results that were published in Nucleic Acids Research. This milestone encouraged me to start my PhD program in Skoltech. After 6 successful years in Microsoft, Skoltech was like a breath of fresh air. While Microsoft quite good as an employer – competitive salary, good opportunities. Skoltech was for me like a new beginning. Good professors, very talented students, top standards of education and what is most important – broad relationship to greatest labs across the globe. Science now is collaborative process, and my work is a good example of it,” told Sergey.

Currently Sergey is working under the supervision of Director of Skoltech Center for Data-Intensive Biomedicine and Biotechnology, Prof. Konstantin Severinov and outstanding bioinformatician, Senior Investigator in NIH, US National Academy of Sciences member, Eugene Koonin.

Sergey Shmakov use bioinformatical methods in his work. “My current research is about characterizing and revealing diversity of CRISRP-Cas systems. CRISPR-Cas is making revolution in biology right now and genome editing is not the limit for this. By doing my research we are not only studying unique defense system but also complementing and giving new tools for biologists. If you will search for CRISPR you will see all the diversity of this field and we are making a story in it,” Sergey said