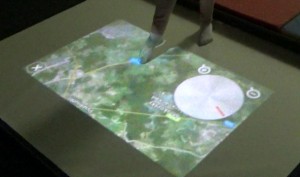 Skoltech scientists led by Skoltech professor, head of Robotics Lab in Skoltech Space Center Dzmitry Tsetserukou have developed new interface for interaction between man and drone. Their project is called LightAir – a new system of Tangible Communication with drone quadcopter by feet gestures. The key feature is projecting a touchpad on any arbitrary surface and thereby make it interactive.

Scientists demonstrated their technology on a quadcopter that takes off, then hovers at a certain point, and projects the interface on the floor. A person can interact with the quadcopter by clicking on the elements of the interface with taps and swipes familiar to smartphone users.

Mikhail Matrosov, one of the developers, speaks about the applications of this technology: “After cargo delivery by drone, you have to confirm it by a sign. You can do it by smartphone but it seems more logic to do it directly in the drone interface. But in this case drone needs to land and it can be dangerous for both drone and human. It is easier to steal it from the ground than from the air. With our technology you can sign it directly on the ground by foot. Another application – in the airport: for example, you try to find your gate. You can ask the security, usually it works, but some airports are extremely huge. For example, London Heathrow is so big, so it has its own train inside. Orientation inside is very difficult. A drone can help you. With our technology you can ask a drone to conduct you to the gate and he will fly ahead of you, projecting an arrow pointing the way and all other useful information.

LightAir is a revolutionary project – a radically new concept of interaction between man and a drone. Until now, the only way of interaction was broadcasting commands by radio using a controller. The Skoltech team developed a new interactive way to interact with a visual channel and 3D-sensors that scan the space in front drone and recognize human gestures. To apply a command, one should only “click” with his foot on the image projected by the drone on any solid surface, whether horizontal or vertical.

Results of this research are published ACM Digital Library. LightAir team was awarded with the prestigious Laval Virtual Award at the most important global forum of computer technologies – SIGGRAPH 2016 (Los-Angeles) and was invited to participate in the Laval Virtual forum next year. This forum, which is annually held in France, is the largest European forum of computer graphics and interactive technologies.