The most important and complex part of our body is our brain. Everything that happens in our body, goes through it. Humanity has learned quite a lot about the brain and how it functions, yet there is much much more to learn and discover. MRI and other technologies that were developed through the last decades, give us a lot of raw and coded data about the brain. The biggest challenge facing scientists is to decipher this data. On December 13th Skoltech and ENIGMA held the international workshop “Big Data and the Human Brain”, which presented how big data science can help us better understand our brain. As part of the workshop, the two sides discussed the concept of the joint Skoltech-ENIGMA Center to be inaugurated at Skotlech. 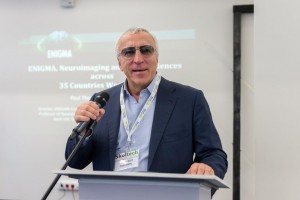 The ENIGMA Consortium is an international effort by leaders worldwide, to bring together researchers in imaging genomics, neurology and psychiatry, to understand brain structure and function, based on MRI, DTI, fMRI, genetic data and many patient populations.

The consortium was initiated at the University of Southern California (USC), and it now consists of over 280 institutions in 35 countries of the world. It combines the data, talents and infrastructure of over 700 scientists working on genome-wide, neuroimaging and clinical data from over 53,000 subjects. Skoltech scientists take part in this international effort. 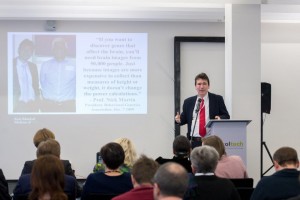 Skoltech President Alexander Kuleshov opened the workshop with greetings to the participants, but didn’t waste time and invited the first speaker, Director of the ENIGMA Consortium, Paul Thompson, Ph.D., to deliver his presentation.

Dr. Thompson described the complexity of brain research and the efforts made by ENIGMA to understand how the brain works through combination of different mapping methods. He told the audience how this scientific network is connecting research centers around the world. The meta-analysis of information from different data centers, he said, will improve their efficiency. 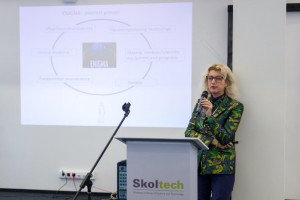 After Dr. Thompson, it was Prof. Leyla Namazova – Chairman of the Russian Public Academy of Pediatrics, Vice-chairman of the Executive Committee Union of Pediatricians of Russia, and an Academician of the Russian Academy of Sciences – who described brain initiatives in Russia, and spoke on her experience of working in pediatrics with ENIGMA-produced data. Prof Namazova was among the organizers of the ENIGMA workshop “Neuroscience in Pediatrics” that was held in the Scientific Center of Children’s Health on December 11-12. 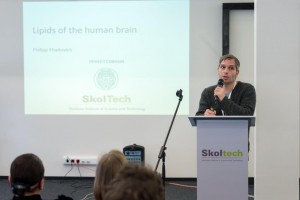 Next it was Skoltech’s turn to present its part in the research of the brain. First came Prof. Philipp Khaitovich, Associate Director of Skoltech Center for Data Intensive Biomedicine and Biotechology, and described project CoBrain – a large-scale analysis of the brain lipidome in healthy aging and brain disorders – from the point of view of biology. After him came Mikhail Belyaev, a research scientist at Skoltech Center for Computational and Data-Intensive Science and Engineering, who presented the computational point of view of how to analyze Neuroimaging data using big data and deep learning.

The second part of the workshop was opened by Prof. Vladimir Zelman. Prof. Zelman, a renowned Russian-American scientist, and one of the pioneers of neuroanesthesia, is the bridge that connects USC and Skoltech, since he is a professor in both institutions. He spoke about Innovations in Translational Neuroscience, Neurosurgery and Brain Computer Interfaces. 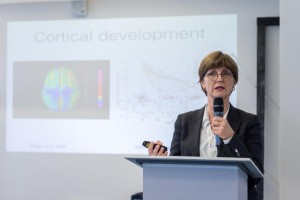 At the end of the workshop, Prof. Zelman described the ties between ENIGMA and Russia: “the brain is so complicated that not only one lab, institute, or university can solve this mystery. It’s really an international magnum effort to find out about human cerebrum.  This is the reason that when we had this ENIGMA at USC, I immediately proposed to Dr. Thompson “let’s go out, we need mathematicians and Russia is famous about mathematicians for centuries”. We immediately contacted Dr. Kuleshov, and he responded very positively. We also contacted Academic City in Novosibirsk, and in three years we developed more interesting projects than 35 other countries in our network. We found support and understanding. This conference is the result of a three-year cooperation. From now on we will have yearly conferences, and I would like it to be not only in Moscow.

The strategic partnership is between USC and Skoltech. Skoltech is a vibrant new kind of university, and I believe it will play a major role as a bridge between countries, not only the United States and Russia, but all over the world. It’s new but it’s already growing”.