Three Skoltech students recently won UMNIK prizes to develop their projects. UMNIK is a 500,000 Rub grant awarded to young talented innovators by FASIE. Andrey Sartison, Yana Fedorova, Oleg Shipitko share their impressions on how they will spend the money to the betterment of their startups. 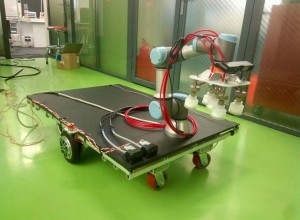 I have won “UMNIK” grant with a project dedicated to the development of a computer vision system for an autonomous mobile robot aimed at warehouse automation. Development of the robot is a project my team and I are working on in the Intellectual Space Robotics Lab headed by Professor Dzmitry Tsetserukou. Computer vision algorithm is a crucial part of the system because the robot has to precisely identify the positions of boxes lying on pallets to perform manipulations with them. We are planning to present the first prototype of the robotic platform at the Skolkovo Robotics 2017 international conference  in the end of April. 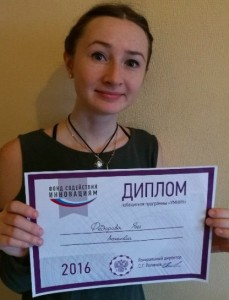 “UMNIK is an unusual program: you need to have a look at your scientific project from the practical point of view, to understand – is it really important? Is it actually doable? Will it be useful for medicine or manufacturing? It is crucial, especially for Russian biotechnology nowadays. Often there is a huge gap between science and practice and such competitions as UMNIK help to find practical application of basic research. Although UMNIK grant is not very big it can support young scientists. I will be developing the new way of delivery of genome-editing proteins to eukaryotic organisms, such as a human being. UMNIK will help me to buy reagents and order genes. During the competition, I met a lot of brilliant guys from different fields – chemistry, IT, engineering – I really learned a lot. I wish their ideas will come true :)” 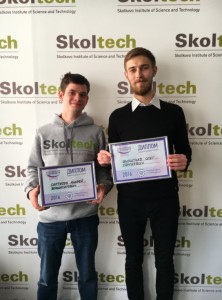 “My idea of “The development of the algorithm for a two-dimensional slicing that takes into account the visual heterogeneity of the material” is the basis of the technological start-up Tyler. We are working in a team with the students of Skoltech and Bauman University on this project together. Our aim is to create a set of hardware and software for automated production of mosaics. Having solved the problem of cutting, we will become closer to the development of MVP and the first orders of mosaic images, produced by our system. UMNIK grant is enough for our prototype, so all team is very pleased with the successful performance in the final of the competition at the Skoltech venue”.