A team of Russian and American scientists have observed that eye movements can indicate which actions a person is about to take, such as whether one is planning to betray or cooperate with a partner.

The study, conducted by researchers from Skoltech and Tomsk State University in Russia and the University of Oregon in the United States, relied on a mobile eye-tracking system to study the characteristics of visual perception in the decision-making process. Scientists were able to observe how socialization affects decisions and cooperation levels by introducing the study’s participants to a well-known Game Theory problem – the Prisoner’s Dilemma.

The Prisoner’s Dilemma centers on an interaction between two people wherein both simultaneously and independently choose one of two alternatives: betray or cooperate with the other participant. A player’s success hinges on both his or her own choice and that of his or her partner.

In the classic version of the Prisoner’s Dilemma, both participants are told that they are members of a criminal gang who have been arrested and jailed. Each is faced with a choice: testify against his or her accomplice, or keep silent. If both remain silent, they will both receive the minimum term of six months behind bars. If both testify against each other, both will be imprisoned for two years. But if one testifies against the other, and the other remains silent, the betrayer is released, and the silent one is sentenced to 10 years in prison.

The peculiarity of the Prisoner’s Dilemma is that objectively, it is always beneficial to be the betrayer. However, as Aristotle said: ”Man is by nature a social animal” So he predisposed to cooperation. As such, the Prisoner’s Dilemma is an example of a social dilemma wherein individual behavior is beneficial, but contradictory to general ethical concepts such as equality and morality.

In other words, this research is rooted in fundamental issues of human nature. How often do people make decisions relying only on rationality? Economic theories are built on the assumption that a person always strives to maximize his or her own benefit. But, as exemplified by studies such as this one, in real-life, the decision-making process is not so straightforward and obvious.

An earlier joint research project conducted by scientists from Skoltech and the Moscow Institute of Science and Technology (MIPT) revealed that participants who did not know each other were relatively likely to cooperate.

In particular, strangers participating in the Prisoner’s Dilemma only opted to cooperate in about 20% of cases, and that figure decreased during subsequent repetitions of the game. Similar figures have been found by various other researchers around the globe.

However, even brief social interactions between players increased cooperation rates to levels similar to those achieved between friends.

Scientists are eager to identify and understand the mechanisms that convert an individual strategy into a compromise.

In the recent study, a series of experiments were conducted using a mobile eye-tracking system (SMI Eye Tracking Glasses v. 1.8). Scientists compared the oculomotor activities of 12 participants during the first part of the experiment when they did not yet know each other, as well as during the second part – following social interactions between players. 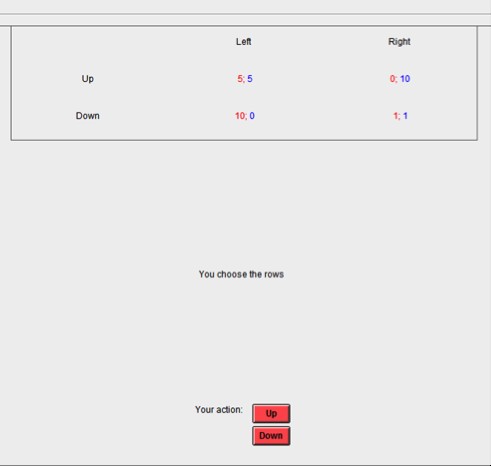 After observing participants’ eye movements at both stages of the game, scientists determined that people who opt to betray their partners spend more time staring at the screen than those who opt to cooperate.

“These results show the multifaceted nature of decision-making,” said Tatiana Babkina, Skoltech Ph.D. student and one of the study’s authors. “They also indicate the possibility of using eye-tracking systems in group experiments, as well as the strength of this method in decision-making process modeling and research,”

The results of the study have been published in the prestigious scientific journal PLOS ONE.