Skoltech was honored with the Rising Star of Citation Impact award for its dramatic increase in publications during the Web of Science Awards ceremony in Moscow Thursday evening.

Award organizers Clarivate Analytics said the Rising Star award is presented to research institutions that significantly increase their publication activity over the course of a year, both with respect to quantities of published articles and subsequent citation scores.

Skoltech President Alexander Kuleshov was thrilled to receive the award, and attributed the honor to the hard work and dedication of the institute’s world-class faculty.

“For some time now, we have been doing very well as far as publication activity goes. Skoltech is on par with leading young universities around the globe with respect to high impact publications,” he said, noting that the institute will strive to build its publication momentum even further, guided by the goal of having a noticeable impact not only in Russia, but internationally as well.

Skoltech Professors Konstantin Severinov and Artem Oganov were also honored at the ceremony for being among the most highly cited researchers in Russia.

Severinov, Director of the Skoltech Center for Data-Intensive Biomedicine and Biotechnology (CDIBB), was awarded for having been the second most highly cited scientific researcher of biological  sciences in Russia in 2017.

“In 2017 we published a lot of papers in high-profile journals, and it’s particularly nice that most papers have as first or co-authors Skoltech PhD and MSc students. It’s really them who should be congratulated. Most of the published work from our lab is on new antibiotics and CRISPR. The latter is a very hot topic that I hope will be aggressively developed in Russia. CDIBB is working on this with the support of our Next Generation Program grant with MIT Professor [and CRISPR pioneer] Feng Zhang. I also take pride in the Rising Star award as I know that in no small measure, the success of Skoltech is due to publications by professors and students from our center,” he said in an interview following the ceremony.

Oganov, a member of the Russian Presidential Council for Science and Education was named the most highly cited Russian researcher in the field of physics in 2016, and though he was again the most highly cited in his field in 2017, Clarivate Analytics have a policy against issuing the same award two years in a row.

Thus he was invited to this year’s ceremony to be honored for his success.

The much decorated crystallographer delivered a speech in which he disclosed the secrets of success and impact: “First, to love science. The main secret of success is to love what you do. Second, to select and train the brightest students and postdocs. Without a strong team you cannot do challenging things. Third, to expand horizons without being afraid to tackle completely new and challenging problems. And fourth, be yourself and be different, do different things from what everyone does, do things that people consider slightly crazy. People told me it was crazy to try to solve some of the problems I have solved – but my efforts turned out to be a big success. Some said it was crazy to return to Russia – but I did it and it was the best decision in my life.”

Web of Science is a search platform that integrates academic and patent databases. Since 2016, it has been managed by Clarivate Analytics. Prior to that, it was owned by Thomson Reuters. 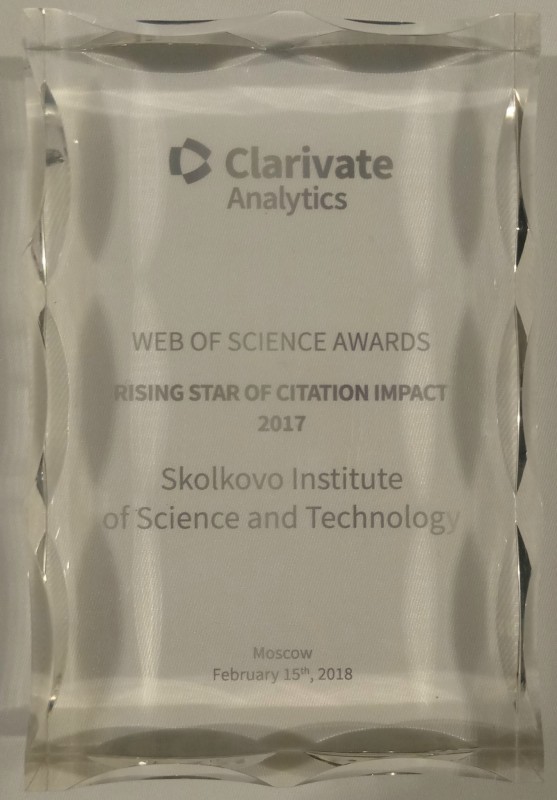