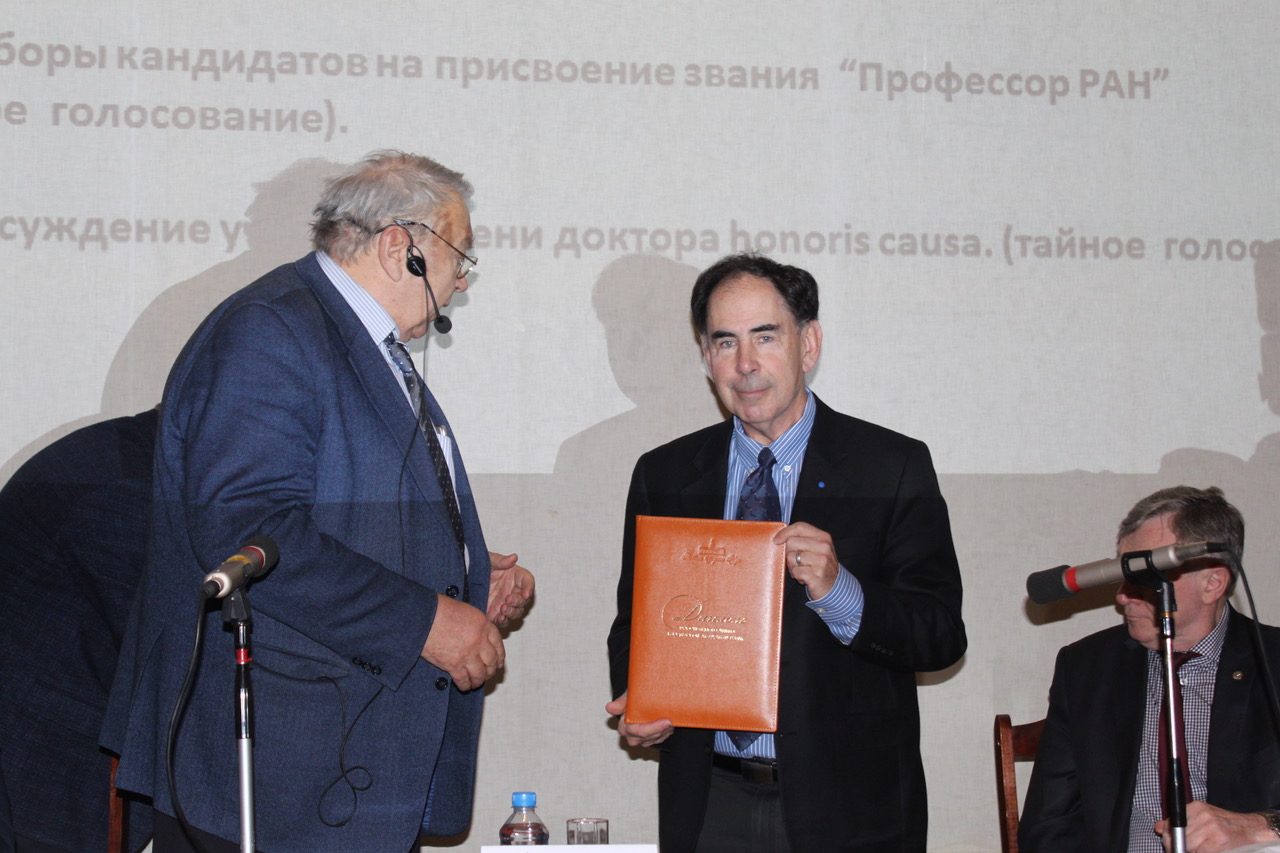 Professor Edward Crawley pictured at the award ceremony hosted by the Russian Academy of Sciences on Wednesday. Photo: Skoltech.

Skoltech Founding President and Massachusetts Institute of Technology (MIT) Professor Edward Crawley has been named a Foreign Member of the Russian Academy of Sciences (RAS), a distinction awarded to scientists of deep international renown.

RAS foreign membership is reserved for “the most prominent foreign scientists recognized by the international scientific community,” according to the Academy’s criteria.

Members of the RAS General Assembly elected Crawley to receive this honor based on his career in astronautics and cosmonautics, as well as his contributions to space exploration.

During the course of his career, Crawley’s research has focused on the architecture, design, decision support and optimization of complex technical systems, subject to economic and stakeholder constraints. In particular, he has focused on identifying the architectures of systems used for different missions that share common elements.

His pioneering research has led Crawley to work as a consultant with the National Aeronautics and Space Administration (NASA) on designing human exploration and earth observation systems. He has also chaired the NASA Technology and Commercialization Advisory Committee, and served in various other advisory roles with respect to the US space program.

During a brief interview following his formal acceptance of the honor Wednesday, Crawley talked about the impact members of the RAS have had on his own career: “I’ve had many great professors in my life, and the professors of my professors. If you look at my family tree – my advisor and his advisor and his advisor – there are some very famous people, but no Russians. So I began thinking about the impact that members of the Academy and the academic community of Russia have had on my life, and it’s actually very broad.”

“Academician Sergei Korolev created practical space travel, which is what I’ve spent my whole life working on. Academician Evgeny Velikhov was the first member of the Academy that I met when he was at MIT working with my supervisor, Jack Kerrebrock, so a long time ago there was a good relationship at work.  When I first came to Moscow, I was invited by Academic Roald Sagdeev to visit the Space Research Institute, and I was very warmly welcomed by Academic Yuri Ryzhov when he was the rector of the Moscow Aviation Institute,” he said.

“So in fact, although I don’t have a formal supervisor who is a Russian, these members of the Academy over the years have had a very significant impact on my life, which I appreciate a great deal,” he explained.

Asked if he had any advice for young scientists who aspire to reach the level of global renown he has achieved in his career, Crawley said: “My general advice is to do what you love and do it well, and don’t worry about the recognition.”

Though the award ceremony was on Wednesday, Crawley was elected a foreign member in 2016.