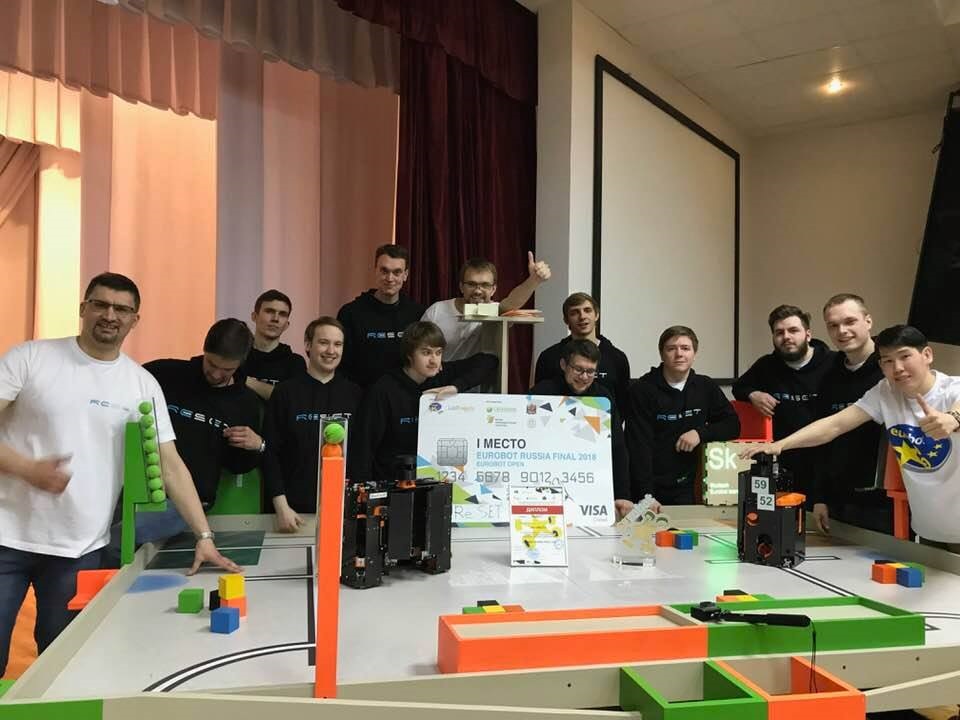 Skoltech robotics team reSET won first place on Saturday in the Russian round of the international Eurobot competition.

Having secured its latest victory on the national stage, the team will head to la Roche-sur-Yon, a small village in France, where it will face off against the crème de la crème of the European robotics world. The final round of the competition will take place from 9-12 May.

This is the team’s third national Eurobot victory in as many years – a victory made all the more impressive by the fact that the team has only existed for three years.

In securing its latest win, reSET – which consists almost entirely of first-year MSc students – faced off against teams with comparatively enormous budgets and experience levels. Professor Dzmitry Tsetserukou, head of Skoltech’s Intelligent Space Robotics Laboratory and reSET team leader, believes that the success of his team owes to the cohesion of its individual members.

“Robotics is all about teamwork. You need talented individuals from various different fields. Each member needs to be a highly accomplished specialist. We have wonderful, skillful individuals. We trained them a lot, and now they’re one strong team. Each one is aware he is responsible for the success of the whole project,” said Tsetserukou.

With respect to bringing in individuals from different fields, Tsetserukou took care to populate reSET with specialists in IT and electronics, as well as mechanical engineers. “To find the specialists and unite them and train them – it’s huge work, but in the end you get unique products,” he saidl.

Thanks to their diverse areas of expertise and the resources available, the team was able to bring their ideas full circle – from initial conception to prototype to the manufactured project. And they were able to do just about all of it within the Skoltech labs.

Notably, a week prior to its success at the national stage in Rostov-On-Don, Russia, reSET suffered a significant setback during the Moscow round of the competition. Due to a glitch, their robot failed to stop moving when the match ended at the 100-second mark, in violation of the rules of the competition. This caught the team completely off-guard as it had not occurred during any of their practice runs.

With only seven days until the national competition, the team immediately set to work to identify and resolve the malfunction. In Tsetesrukou’s view, this provided an excellent learning opportunity.

“It helped the team understand how important it is to make a robot robust and reliable – not only beautiful to look at and kitted out with a cool control system. Each robot has lots of components and a malfunction can appear anywhere; the crucial part is understanding where the problem is and fixing it. Within seven days, we fixed the malfunction, and then headed to nationals with a very reliable and sophisticated robot capable of competing against very strong teams,” he said.

That said, their success in such a short period didn’t come without extremely hard work. Tsetserukou noted that the team barely slept during the week – working around the clock to strengthen their technology.

Their hard work will continue in the two weeks leading up to the international finals in France, where they will face the best teams from across Europe and beyond.

Though Tsetserukou encouraged the members of reSET to spend a day resting after the national competition, he said they’re already chomping at the bit to test their ideas on how to further strengthen their robot before the finals.

It is this rock solid work ethic that the professor takes the greatest joy in. “I’m proud that when my students graduate, they are true leaders. I don’t necessarily mean that they’re top bosses, rather I mean that they lead by example. They are extremely hard workers who know how to do their jobs. Their colleagues and supervisors are inspired by their skills and relentless work ethic. It is this that leads them to actualize bright futures in industry and startups,” he said.