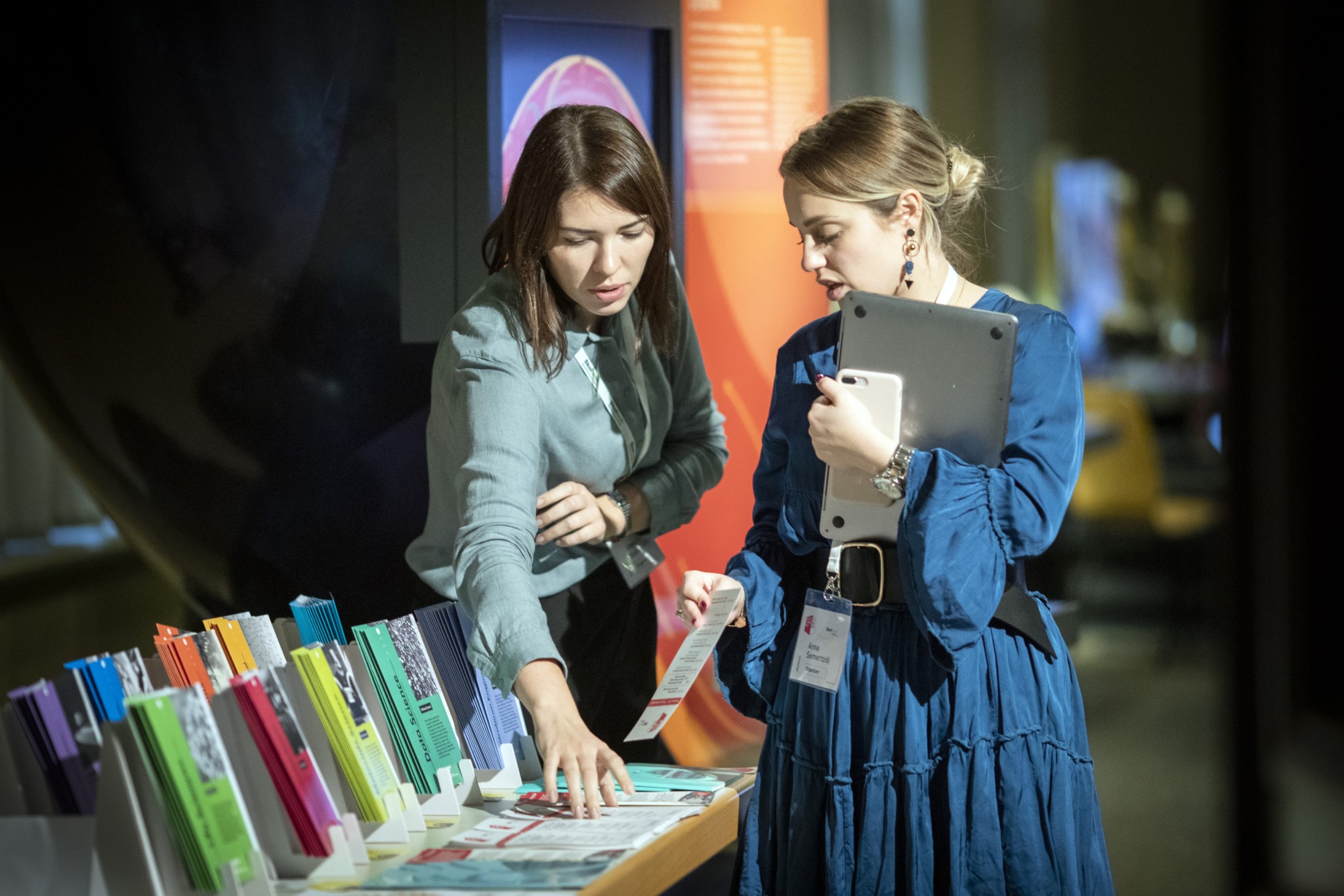 The Falling Walls Lab takes place annually in early November as part of a larger conference (Falling Walls), marking the anniversary of the fall of the Berlin Wall and the opening of international borders between Eastern and Western Europe. Its focus is on future breakthroughs in science and society. It is the grand finale of Falling Walls Lab, and draws a hundred Falling Walls Lab winners from around the world to present their work, which aims at solving modern day challenges, in front of a distinguished jury. The event is important in that it promotes exceptional ideas and allows promising scientists and entrepreneurs from all fields to network on a global level. As well as presenting their ideas, the finalists receive free tickets to the Falling Walls conference and have the opportunity to meet with the world’s movers and shakers of science, business, and policy-making. 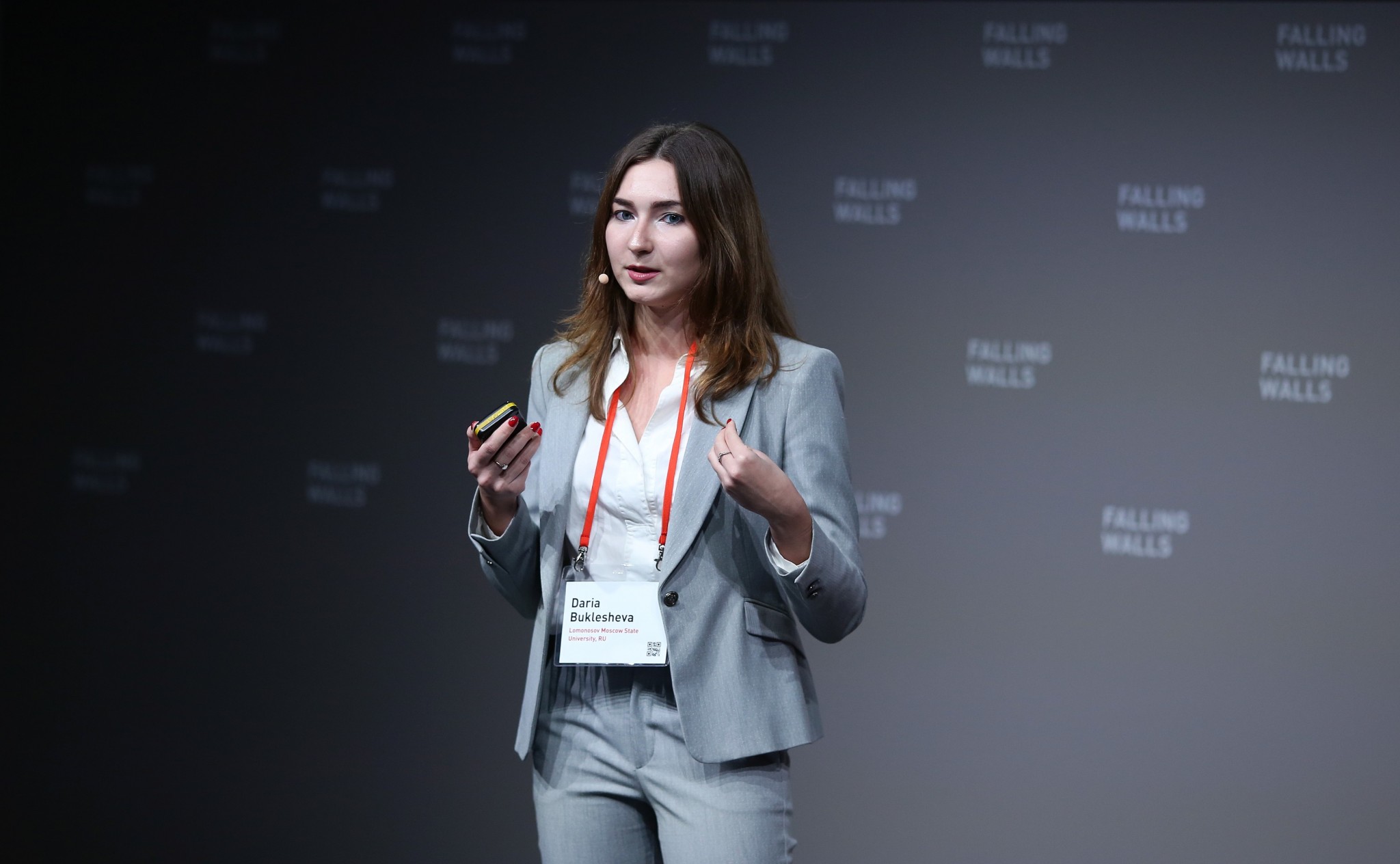 Daria Buklesheva of Moscow State University offered her thoughts on the event and her project:

Daria’s project was about a novel material for target drug delivery; that is, target delivery within the human body. Her team developed a method for starch-based polymer synthesis, using microwaves for polymerization. They tested the received material in vivo (studies to test effects on a biological entity – usually animals or humans) and in vitro (so-called test tube experiments on cells and microorganisms), exploring its behavior on vital models.

“Our polymer could help prevent the harmful side effects from current drugs and reduce the frequency of drug intake,” Daria concludes. “Overall, it’s an amazing experience presenting your scientific work at an international level. You will meet people of different mentalities and backgrounds who will ask you many questions about yourself, your professional development, field of research and much more! Even though it was only six days, we’ve made new friends from different countries and continents. Overall, I came back feeling inspired and ready to conquer new heights,” she said. 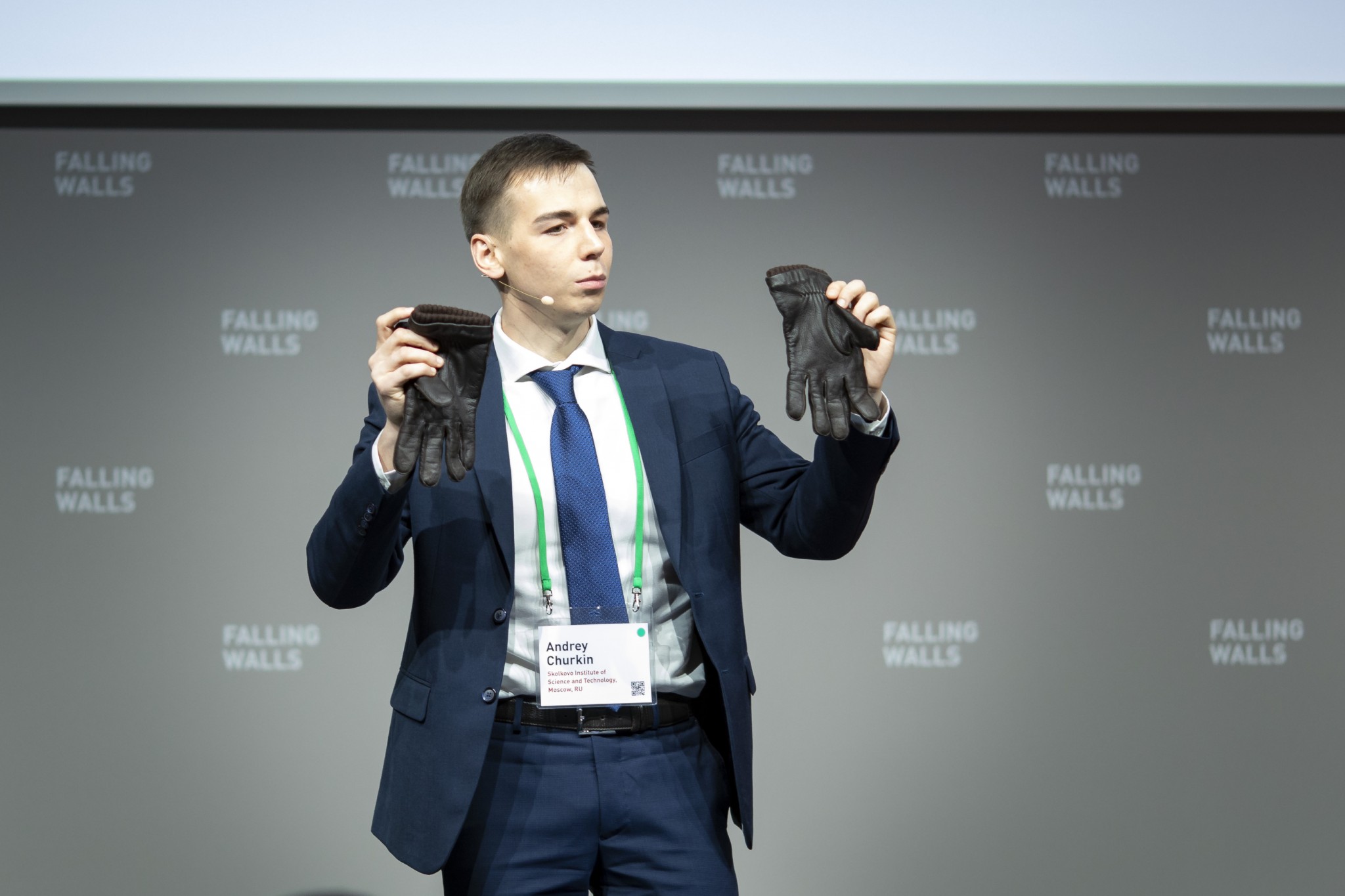 “I experienced a ‘scientific shock’ while watching other participants’ presentations. I have never seen so many outstanding, talented, and inspired people gathered in one place. Many were scientists and startuppers between 20-23 years old. The conference atmosphere was inspiring and I will use this positive energy in my research,” said Andrey Churkin of Skoltech.

Andrey’s presentation began with a simple example. He showed how complicated cooperation could be even when it involves just two parties. He then moved on to real-world projects such as cross-border power interconnections, which would enable international electricity trading. Projects like the Asian Super Grid are thought to bring in billions of dollars in terms of generation cost savings and greatly reduce CO2 emissions in the region. He showed that the main issue is how countries could share savings and who should invest in capital-intensive power lines. Using Cooperative Game Theory principles, he demonstrated how the issue of international energy cooperation could be addressed.

“You get to experience a range of bright emotions and during the grand finale week, you grow professionally and mentally while surrounded by the most talented people from all over the world,” said Andrey, reflecting on his overall experience.

“The Falling Walls Conference is a fascinating example of a truly international community. Scientists and entrepreneurs from all over the globe showcase problems and solutions that touch societies in different countries and allow them to look beyond the horizon. Skoltech is proud to be part of this dialogue!”

Falling Walls Venture
Alongside Falling Walls Lab, the event also included Falling Walls Venture, a competition for research-based start-ups nominated by academic institutions from across the world. Twenty-eight companies took part in the event, one of which was Skoltech startup, TetraQuant. Dr. Karina Gurgenova, Dr. Vasily Chernyshev, and Professor Gorin all presented TetraQuant’s project, an ongoing work that aims to improve early diagnosis of ovarian cancer using a combination of photonic tools and lab-on-a-chip technology. The team received feedback and advice from jury members as well as contacts for potential investors/partners interested in R&D for diagnostic medical devices.

Berlin Science Week Campus took place from November 6-7 at the Museum fur Naturkunde (Natural History Museum). Skoltech held a seminar there on November 6 drawing an audience of over 50 people. The goal of the seminar was to spread Skoltech’s image abroad, not just in Germany but also around the globe.

Divided into 12 short presentations in two sessions, the day began with former Skoltech Provost Rupert Gerzer acting as moderator for the first session and giving an introduction and overview of the institute. The seminar covered Skoltech’s structure and field-specific presentations such as 3D-printing at Skoltech and collaboration with TUM, Brain Lipidomics, Machine learning and data-driven modeling at Skoltech, The increasing role of machine learning and chemical informatics in modern chemistry, and many more. It highlighted the hands-on, integrated approach aimed at combining different scientific disciplines to create or improve technologies that serve industry demands.

Skoltech Provost Keith Stevenson gave a presentation (Cultivating Digital Natives) and acted as moderator for the second session of the seminar. Professor Stevenson talked about the term, “digital native,” and how it came into being during the information and technological revolution that has been underway for nearly two decades. A digital native is a person who grew up with technology from a young age, learning the basics of using computers and smart phones before they could even talk properly. Those who remember a time without the Internet and all the technologies that we take for granted today are considered to be “digital immigrants.”

“The important part of the seminar was to show how Skoltech is structured, especially regarding its education and training programs, which integrate research and innovation seamlessly. At Skoltech, we’ve created a curriculum that maps onto the needs of researchers, so within the course structure we teach what is needed for the research. During that curriculum element, students also go to labs dedicated to them where we show the type of research that they will be doing. In this way, we connect both to the curriculum and to the research. For instance, in Pavel Troshin’s course they learn how to make a photovoltaic cell and test its efficiency. I don’t know of any other graduate program where students go during the application period and make and test a real device that could become new technology. That is what separates us from traditional universities.” – Skoltech Provost Keith Stevenson