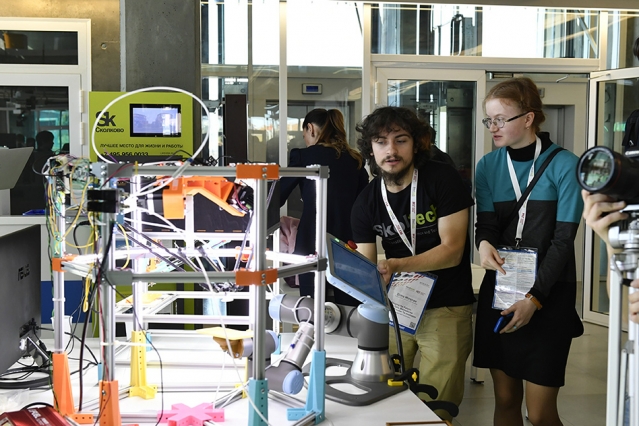 Faculty and students at both universities will continue to pursue common research interests, which is to collaborate in solving cutting-edge problems in science and engineering.

MIT has renewed its relationship with the Skolkovo Institute of Science and Technology (Skoltech). The collaboration among MIT, Skoltech, and the Skolkovo Foundation, began in 2011 with the goal of launching and developing Skoltech as a leading graduate research university in Moscow, giving faculty and students from both universities the opportunity to take part in a scientific and educational exchange.

The third phase of the collaboration, governed by a five-year agreement, will build on the most successful aspects of the second phase, supporting joint activities between MIT and Skoltech in research, graduate education, and innovation. The focus will continue to be on strengthening research collaborations between individual faculty members at the two institutions.

“Skoltech has developed rapidly and has recruited excellent faculty and outstanding students,” says MIT Professor Bruce Tidor, the faculty lead of the MIT-Skoltech Program. “The support, commitment, and engagement of more than 75 MIT faculty have led to the success of the MIT Skoltech collaboration.  Faculty and students at both schools will benefit from continuing to work together.”

An ecosystem built for innovation

One of the collaborative research projects, headed by Yet-Ming Chiang, the Kyocera Professor of Materials Science and Engineering at MIT, led to a new approach to eliminate carbon emissions from cement production, a major global source of greenhouse gases (GHGs).

“The most valuable aspect of our collaboration with Skoltech is that it gave my students and me the freedom to take on a risky topic in which we had no prior track record: low-GHG cement,” Chiang says. “That eventually opened up an entirely new research area that we plan to develop with our colleagues in Russia.”

As another example, a collaborative project led by Kamal Youcef-Toumi, professor of mechanical engineering at MIT, laid the foundation for RecyBot, a low-cost robot under development to dismantle mobile phones to remove and separate their component parts, which in turn could be used to create new phones or otherwise be processed.

Another valuable aspect of the collaboration is the support of the MISTI-Russia program, which has brought dozens of MIT students to Russia to study, conduct research, and immerse themselves in Russian culture.

“The MIT Skoltech collaboration has made the very existence of the MISTI-Russia program possible,” says Elizabeth A. Wood, professor of history at MIT and co-director of the MISTI Russia program. “It has supported the program since the beginning and sponsored the revival of Russian language teaching at MIT after a 16-year hiatus. Since its inception, it has sent many MIT students to Skoltech and other Russian institutions to work in a wide range of fields, from nuclear physics to cancer modeling, from robotics to aerospace engineering and architecture.”

Joint research projects will continue to be the focus of the collaboration’s third phase. Other important features include new entrepreneurship and innovation programs, the continued collaboration with MISTI to connect MIT and Skoltech students, and a joint annual conference.

Professor Jacob K. White, a principle investigator of the Research Laboratory of Electronics (RLE) at MIT gave his insights into the collaboration, having been involved in the MIT-Skoltech project since its inception.

“Students from Ivan Oseledets’s and Maxim Fedorov’s respective groups study under me at MIT for several months at a time, going back and forth. In my experience, students who have come through the Russian education system are strong in mathematical and numerical analysis. I have met PhD students from Skoltech with a very strong numerical background, which is uncommon among MIT PhD students, and that is one of the benefits of this collaboration. I have access to a lot of good students!”

The decision to continue the MIT Skoltech Program drew on the input of several MIT sources, including the MIT Skoltech Faculty Coordinating Committee, the faculty-led International Advisory Committee, and the Senior Risk Group, a group of senior MIT administrators charged with evaluating proposed MIT engagements with entities in several countries, including Russia.

“We share many intellectual and practical interests with our Skoltech colleagues, yet collaborations like this also exist in the context of complicated and dynamic international relations. The broader US-Russia relationship was necessarily a factor in our review and planning of the MIT-Skoltech collaboration,” says Richard Lester, associate provost for international activities at MIT. “In the rapidly changing global environment, MIT’s international collaborations must remain aligned with our core mission and values. Learning about the world, helping to solve the world’s greatest problems, and working with colleagues around the world who share our curiosity and commitment to rigorous scientific inquiry and free and open exchange are core values for MIT.”

As the next chapter of the MIT Skoltech collaboration begins, faculty members who have been involved over time are pleased to see the collaboration continue. As Institute Professor Phillip A. Sharp observes, “The MIT Skoltech relationship serves many positive societal purposes even though we may not agree with the policies of the Russian government. The scientific exchange helps citizens of the two countries to become better acquainted, making it more difficult for people to demonize one another. This includes exchange of students, collaboration between Russia and US/MIT scientists and participation in meetings in both countries. Note that even during the darkest days of the Cold War, there was scientific exchange.”