Grigoriy Yashin, a 4th year PhD student of the Skoltech Space Center (SSC), is traveling to Brazil to attend the 19th IEEE International Conference on Advanced Robotics (ICAR) 2019, which takes place from December 2-6. 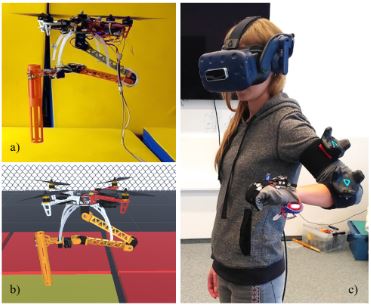 He will present a paper titled, “AeroVR: Virtual Reality-based Teleoperation with Tactile Feedback for Aerial Manipulation,” which he wrote with a team of developers (Daria Trinitatova, Ruslan T. Agishev, Roman Ibrahimov, and Dzmitry Tsetserukou). The paper suggests a new approach to remote aerial manipulation using the VR twins of a real drone and a target object, and a wearable motion capturing interface enhanced with tactile feedback for intuitive control of object manipulation using the robotic arm of the drone.

The paper focuses on the development of a novel teleoperation system for aerial manipulation using Virtual Reality (VR). The controlled system uses a UAV with a 4-DoF robotic arm and embedded sensors. The VR application presents a digital twin of the drone and remote environment to the user through a head-mounted display (HMD). The operator controls the position of the robotic arm and gripper with VR trackers worn on the arm and a tracking glove with vibrotactile feedback. The control data is translated in real-time directly from the VR to the actual robot. The results of the experiment showed a stable and robust teleoperation mediated by the VR scene.

This proposed system could improve the quality of aerial manipulations considerably and be applied in areas such as industrial maintenance, support for emergency response teams, and e-commerce.

To view a demonstration of this technology, check out the video below!

ICAR is one of the oldest and most prestigious robotics conferences in the world. This year’s event is taking place in Brazil at the Universidade Federal de Minas Gerais (UFMG). The program consists of plenary talks, workshops, and oral presentations from all areas of robotics, particularly emerging paradigms and application areas such as robotics vision, spatial recognition, robotic entertainment, etc.

For further information about the conference, see the ICAR website.