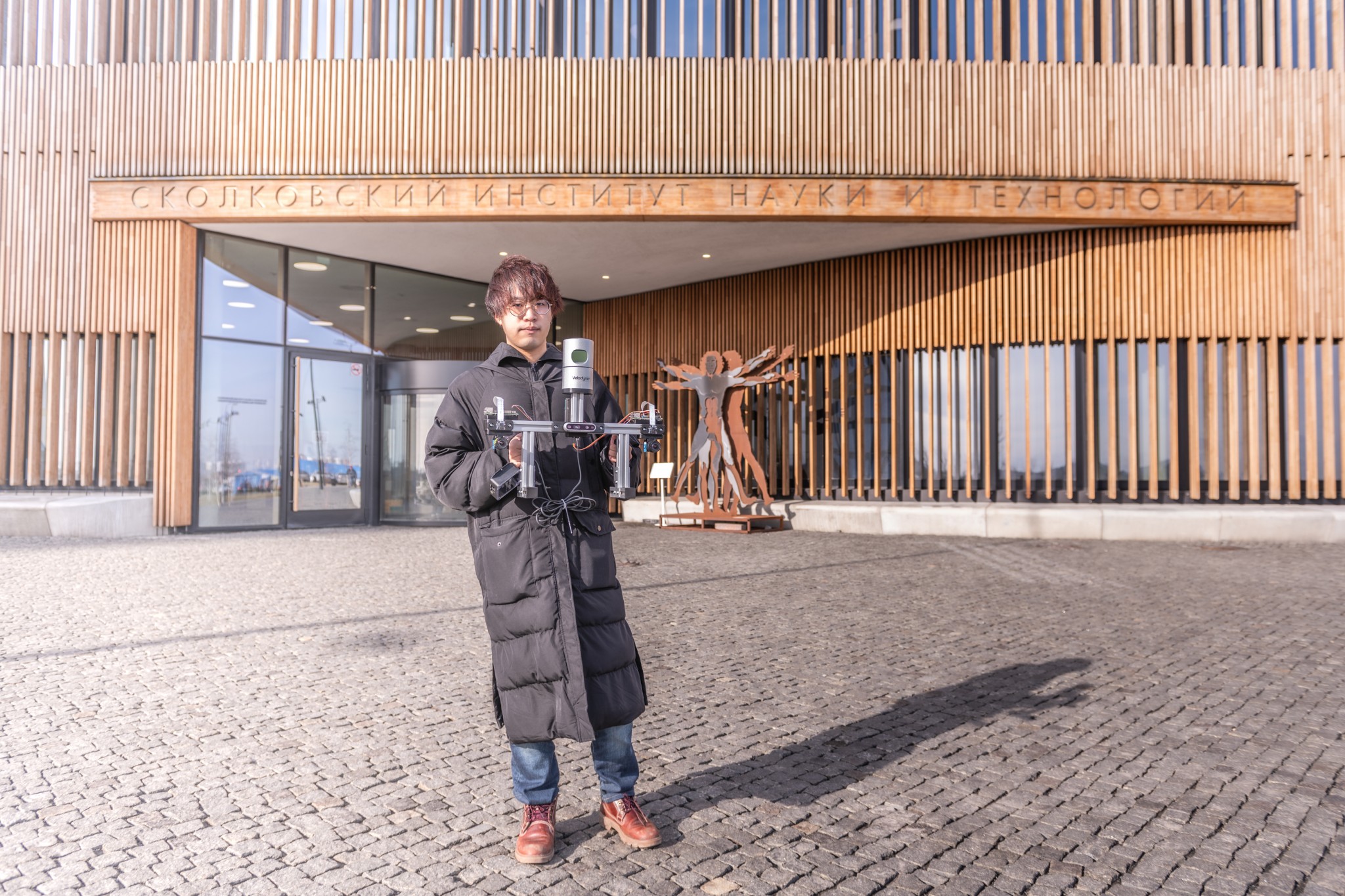 The Skoltech-Toyohashi University of Technology (TUT) student exchange program is a great opportunity for students to experience each other’s culture and to do an internship in a new environment. Kento Yamagata, a Japanese undergraduate computer science and robotics student from TUT, recently spent two months doing a research internship at Skoltech under the supervision of Professor Dzmitry Tsetserukou (Skoltech Space Center). Kento’s area is in robotics and his project, which is titled “DepthGear: Advanced Indoor Vision Benchmark Suite,” is a sensory device designed for data collection.

Skoltech and TUT share similarities in that both focus on technology and have a similar number of postgraduate students, both work with industry (TUT has strong collaborative relationships with Toyota, Denso, etc.), and both have a high number of international students. In June of 2019, Skoltech and TUT signed a student exchange agreement and Kento was the first student to come to Skoltech under this program.

Kento’s time at Skoltech has ended, but before he went back to Japan, we caught up with him to have a chat about his experience here.

“I heard about the internship program with Skoltech through Professor Jun Miura who teaches at my university and has worked with Professor Tsetserukou. He recommended that I do it,” said Kento.

Professor Tsetserukou worked at TUT from 2011 until 2014 as an assistant professor and the head of Robotics Laboratory; during that time, Professor Miura was his scientific mentor.

Originally, Kento planned to do research related to robotics, but worked on developing the device titled “DepthGear,” which has seven sensors and utilizes LiDAR, rolling shutter cameras and global shutter cameras to gather data for neural networks. The data are collected with timestamps and the cameras are completely synchronized to ensure that it’s all done simultaneously.

A global shutter camera refers to sensors that can scan the entire area of an image simultaneously; a rolling shutter camera captures an image by scanning a scene rapidly either vertically or horizontally (this is different to a still picture or video frame, both of which are captured in a single snapshot). 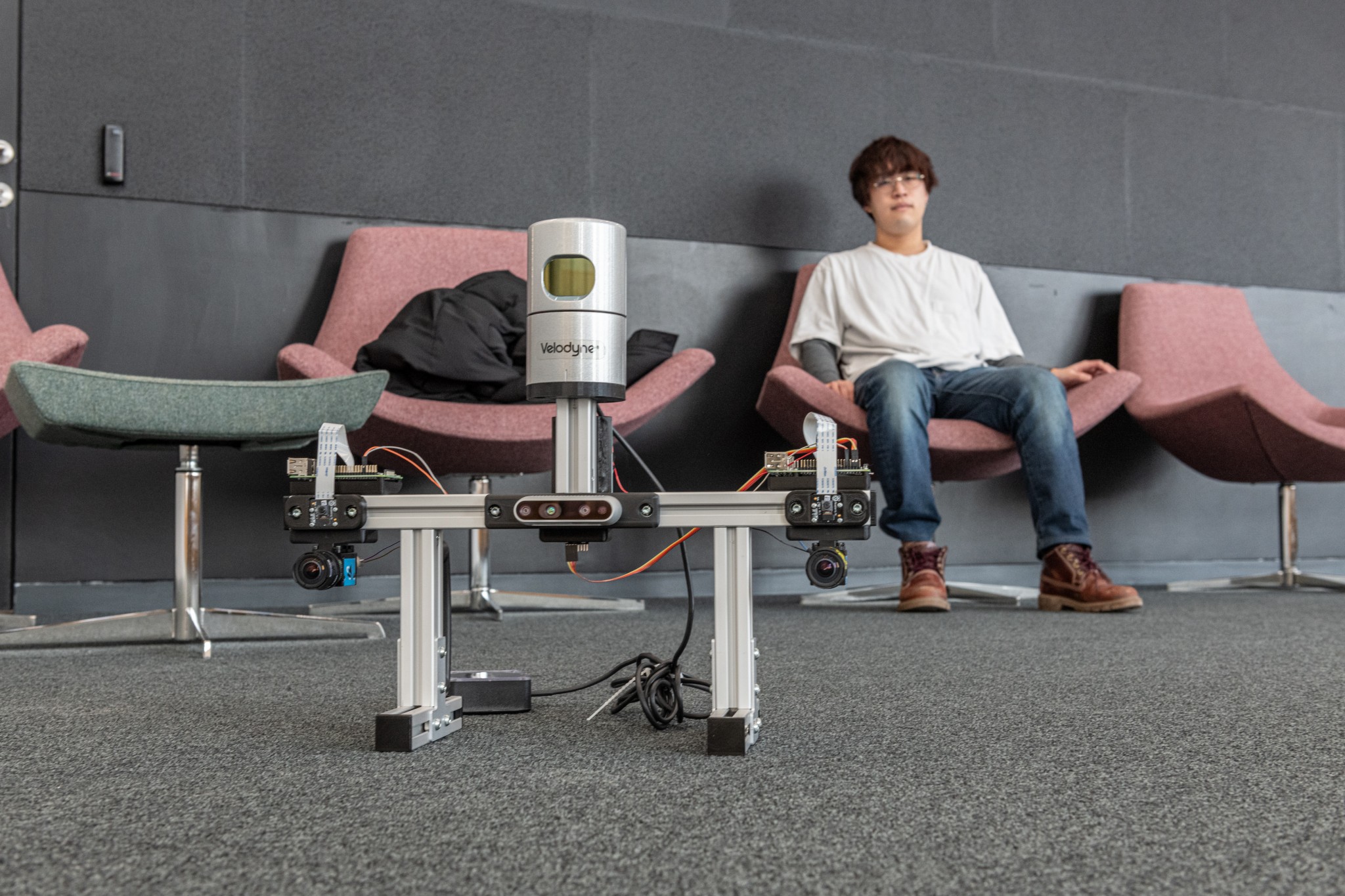 “I’m just about finished this project, so before I leave I want to make some datasets, which we could then use to train neural networks for object detection or predicting depths such has how far a given object is. This is useful, for instance, for an autonomous moving robot,” said Kento.

Kento built the device with the help of a Skoltech PhD student, Pavel Karpyshev and it will prove useful in providing datasets for other researchers who want to train neural networks.

“We can compare a network that has been trained with a global shutter camera, and compare the results with what obtained with a rolling camera,” said Kento.

“In the future, the proposed technology along with neural networks will make it possible to obtain high quality 3D object reconstruction using cheap and compact rolling cameras in your smartphones,” added Professor Tsetserukou.

Asked about what he enjoyed about his internship, Kento didn’t hesitate to voice his views.

“What I find cool is that you get the chance to do some innovative things. If you want to build something in the Intelligent Space Robotics Laboratory, the professor and students are very helpful. When I arrived here, I spoke with the head of the department; he told me to come and talk to him if I had any ideas for development or research. I found that to be a very nice feature of Skoltech. Also, the campus building is so beautiful and well designed!”

It was also Kento’s first time in Russia and while life and culture are very different to Japan, he really enjoyed it.

“I love Moscow, maybe even more than Japan! Everything about it, the food, the culture, the people. I don’t really like spicy food and this is the perfect place for that, because Russians don’t seem to eat spicy food either. They love sweet things like myself. I still can’t speak the language, but my friends were very helpful when it came to simple things like buying shampoo instead of conditioner in the supermarket. It’s been a really great experience.”

Kento graduates in Japan this March. He plans to pursue a master’s degree under the Erasmus program in  Finland, France, and Belgium, spending half a year in each.

His experience and positive feedback should no doubt be an encouragement to other TUT students thinking of coming to Skoltech. 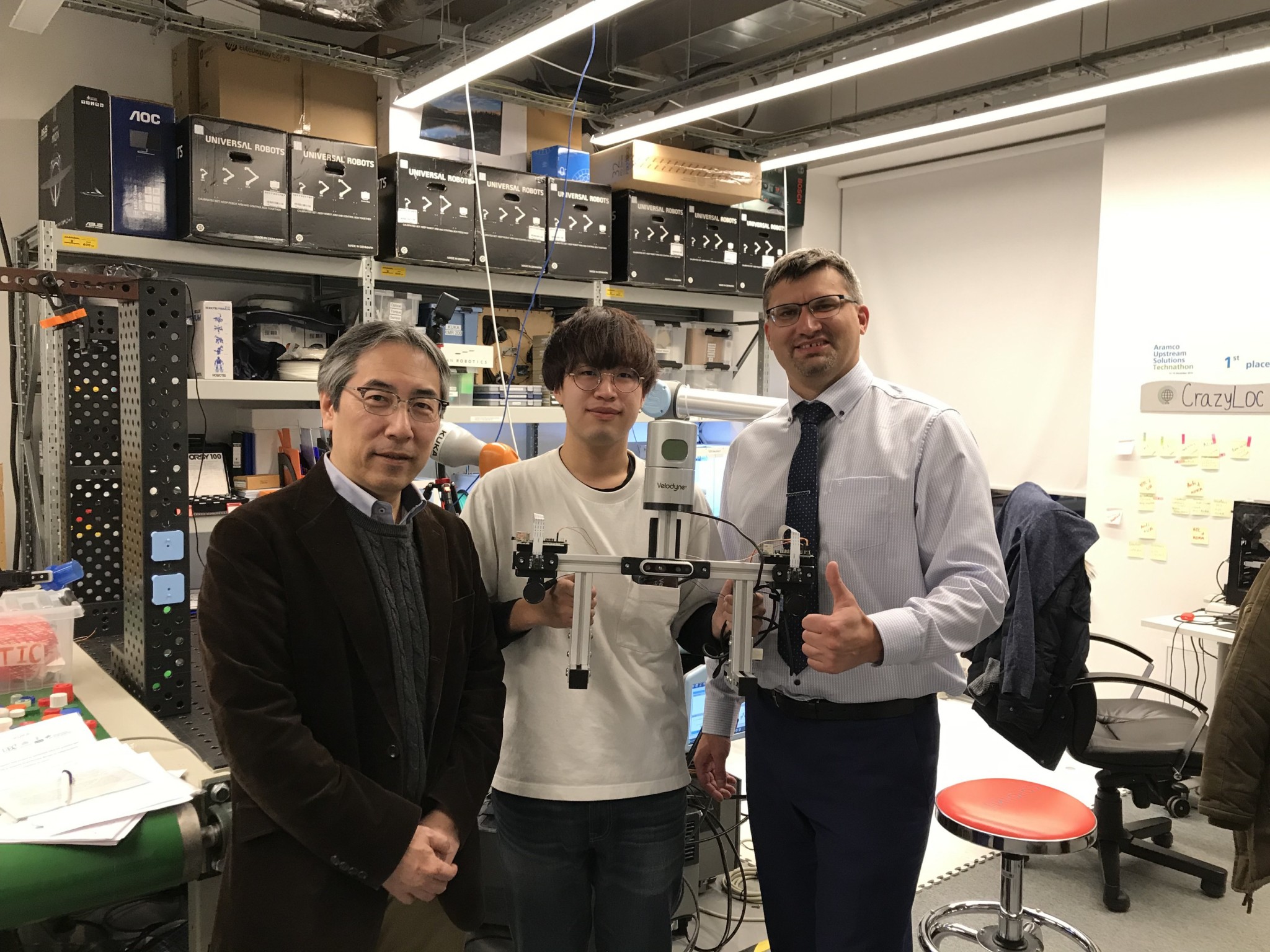 “Professor Jun Miura established one of the leading laboratories in Japan in the field of SLAM and Robot Vision. We are very proud to collaborate with him and hope that it will be possible to send MSc students from Skoltech to the Active Intelligent Systems Laboratory this year. Considering my experience of education and work in Japan, from my first day in Skoltech I had a dream to establish strong relationships with my former academic advisers and to bring in high expertize in robotics and haptics to Skoltech and this dream has come true!” said Dzmitry.

We wish Kento all the best with his studies!