As this year’s Innovation Workshop was drawing to a close, we approached three international mentors asking them to share their impressions and comment on the format of the event and whatever they cared to highlight about the students, the campus, or the city. 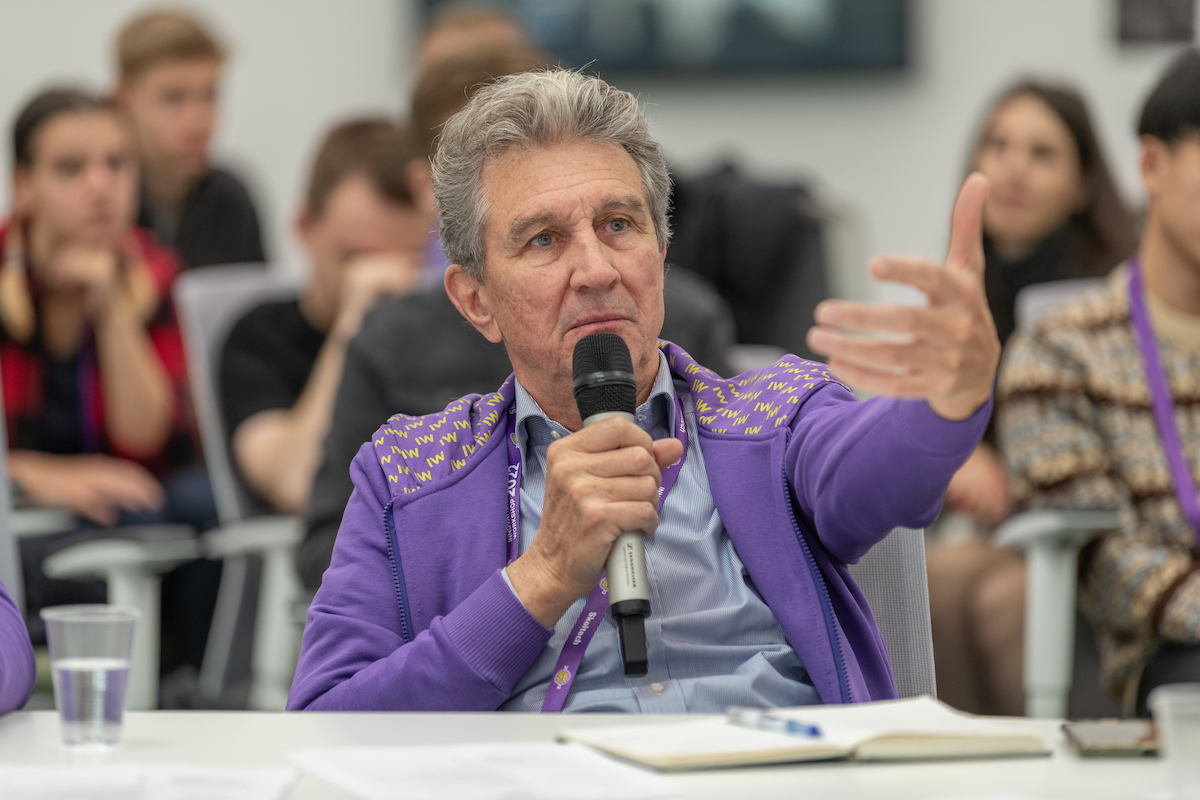 Among the first Western businessmen to become active in the Soviet Union in the wake of Gorbachev’s perestroika reforms, Geoffrey Carr-Harris brought the first American franchise to the country, followed by building and investing in many businesses across industries. He continued to build innovative ventures in other countries, currently focusing on natural language processing and trust agent tools.

This is his first time as a mentor, so he says the experience has been quite new and adds he was amazed by the rate of progress in IW projects: “I saw presentations a week ago, and today. It’s very exciting how far they’ve come over the last week.”

He calls the program “incredible,” explaining that it’s the only innovation-type event he’s been to where people are “squished together and put through a pipeline” and “have to come up with an idea because of a school necessity.”

Carr-Harris also notes the condensed nature of the course: “Most of the startups and even the pitches of real startups that I’ve had experience with are the result of work and iterations that took a lot longer. I mean, some of these projects have gone through many iterations, too — but over just the last few weeks.”

Looking back on his experience as an investor, Carr-Harris says he sees real potential in some of the IW projects, joking that in a way, he has it easy as a mentor, because no one’s asking him for real money. “I can’t tell you how impressive it is what some of these kids have been able to come up with within such a small amount of time,” he says. “And I wouldn’t say that people with real experience asking for real money had projects necessarily better. Some of these projects, I think, actually deserve some funding.”

He says he would want to stay in touch with those teams: “I’d love to stay available to them if they need more mentoring and perhaps even help finding contacts or raising money.”

Carr-Harris, who has lived in Moscow before but has not been around since the beginning of March, says he is glad to be back: “A whole different perspective coming back to Moscow after six months. The news that you hear about Russia when you’re not here tends to be pretty depressing, and coming back here, it is — in many ways — the same fun, amazing city.”

Praising the tenacity of the event’s organizers, Carr-Harris adds he’s really hopeful he can come back to IW next year. 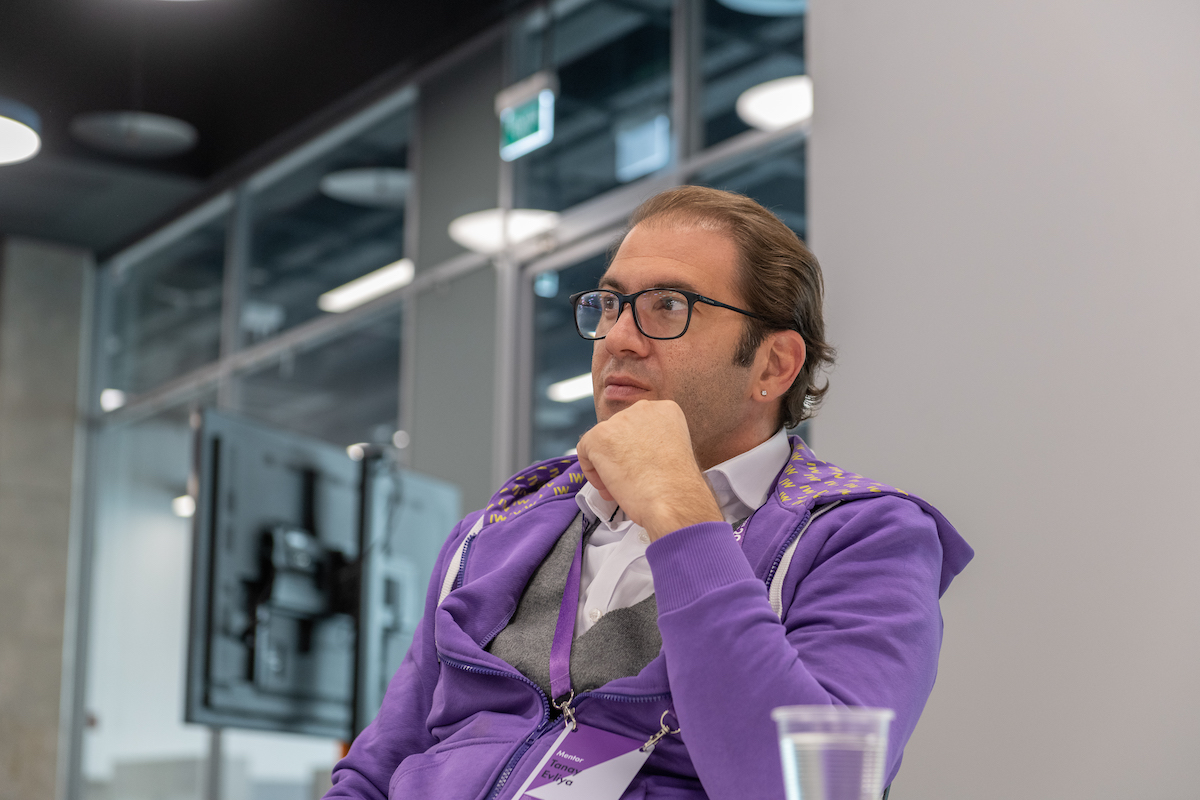 Tanay Evliya has a diverse work experience as both an executive and an investor in the pharmaceutical industry, real estate, education, agriculture, and software development. He has been on teams responsible for the launch of new universities acros the CIS countries.

“Seeing what Skoltech has accomplished over the past 10 or 11 years is great,” Evliya says. “Most research centers around the world are really old and have a tradition they have been building up. They get successful over time, in cycles. Skoltech becoming the successful modern international center that it is — within a decade — is a big achievement. Building ties with universities around the world, hiring good academic staff, and making them work together with locals is what makes the difference, the way I see it.”

He finds it inspiring to see an innovation-oriented event run at a young university: “The model of the Innovation workshop is great. It gives the students a different perspective on the innovation and startup ideology. That makes Skoltech more than just and R&D university. Through such events, the Institute is systematically teaching students to understand how innovation is made and brought to market as a product as well, which is a valuable aspect.”

“Having guests like us come from around the world for this feels like a good opportunity for both the students and us mentors — we learn a lot from them, they are very brilliant,” Evliya says. He works as a mentor in technology development zones for startup companies.

“What struck me was that by the end of the event, most of the students were still motivated,” the mentor notes. “Mostly, at such workshops, by the end, groups lose motivation, because they get negative feedback, they get tired. But what I’ve seen here is they were still willing to work. As a mentor, I’m not just cheering them up but trying to hit them with truths, so they can get a feel of the real life ahead of them. And I see it in their eyes that they are tired but still when I give them feedback, they are like, ‘We should run back and do this!’”

“The city is beautiful,” Evliya adds. “I worked in Moscow about 15 years ago, and it looks much more beautiful and organized now, more vibrant. I’d love to come back, if there’s an opportunity to share experience with students here again.” 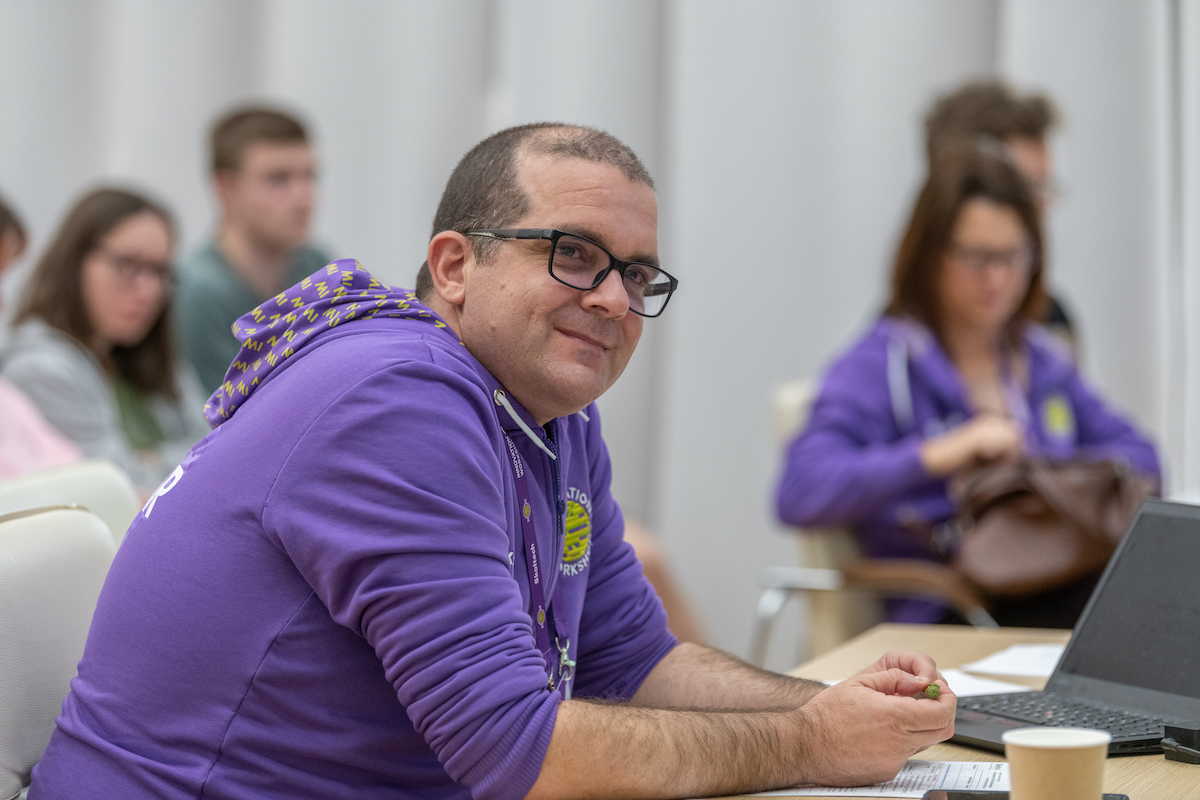 Yosef Shavit founded the business consultancy firm Yozma Consulting, which works with startups, multinational corporations, and foreign investors. “This is my third time as an international mentor at the Innovation Workshop at Skoltech, and I think year after year — taking into account all the challenges — IW is becoming better. The whole vision of Skoltech is to create the best, different kind of engineers, innovators, who can create solutions to meet the world’s challenges. And I can really relate to the mission of Skoltech,” he explains, saying it makes IW a valuable experience for everyone involved: the students, staff, and international mentors.

“I believe entrepreneurship is like a small virus. You implement it in the minds of these young, bright, motivated students, and it will affect their lives and their careers. Making them better engineers and researchers. This is why for me it is always an honor to come back to Skoltech as a mentor and make that impact,” Shavit goes on.

What Shavit wants to bring to the table is not technical expertise as such, but an emphasis on understanding market needs. “For example, we just had a mentoring session with one team that tried to figure out what will be the customer for their new technology? In this short meeting, they understood they needed to think about problems presented by the market instead, and then find a solution, not the other way around. Later, we found a huge problem that needed to be solved and they pivoted and came up with a new solution, much more relevant to the market.”