Postdocs – get ready to Vroom. Science Drive is here.

The new  program is aimed at supporting the professional development and research initiatives of talented young Russian scientists. For the program’s first year, an expert panel will choose a shortlist of seven researchers specialized in experimental condensed matter physics. Two winners will travel to Manchester where they will work for two years under the leadership of renowned physicist sir Andre Geim – then return to Moscow to work at Skoltech.

The university’s Center for #Quantum Materials along with Skolkovo Open University (OpUS) will manage the application and selection process, which began yesterday.

Professor Andre Geim is the first ever scientist to have won both the Nobel prize – for his groundbreaking work on Graphene – and Ig Nobel, for using magnets to levitate a frog. That’s right: he actually made a frog float midair.

Think you’re a high flyer too? Start by reading here about the possibilities – and requirements.

After you’ve read and understood all relevant information, please send your application to: 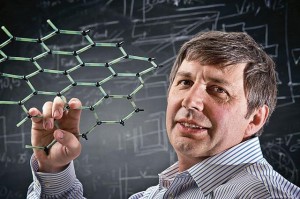