You have seven days to think up an original idea for a tech startup. You are put in a team with several other people whom you haven’t met before and whose area of expertise is not the same as yours. After a week, you will present your project to a team of mentors who include successful entrepreneurs, business angels and industry experts – and they won’t be merciful. 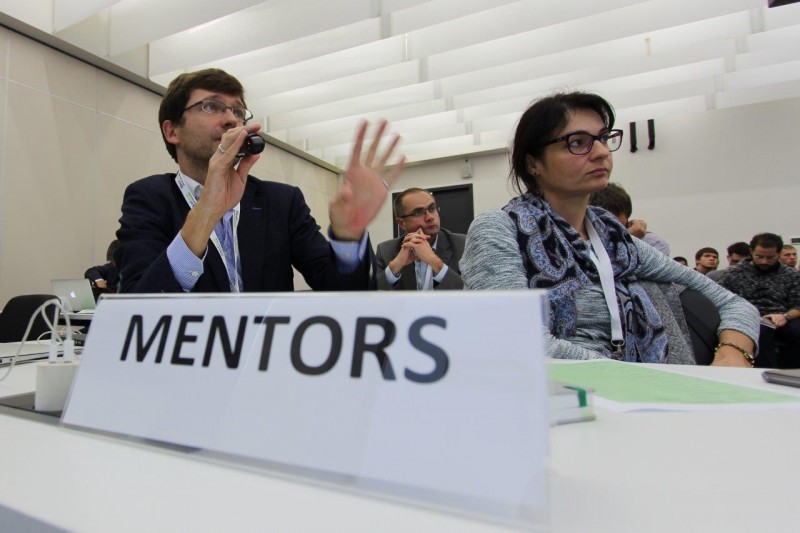 Igor Pivovarov, a serial entrepreneur who raised about $25 million for his projects, offers some words of advice during student startup pitches at Skoltech on Tuesday, part of the Innovations Workshop.

It sounds like the scenario of a reality TV show, but is in fact the baptism of fire undergone by Skoltech’s 164 new master’s students. Known as the Innovation Workshop, the course is aimed at instilling in the students from the very beginning an awareness of how they can commercialize their research in science and technology.

The resulting projects presented to mentors at Skoltech on Tuesday ranged from a glove that turns regular text into Braille and a coat that regulates the temperature of its wearer, to an automatic window-opening device and an app for making charity donations.

Before sending the experts off to assess the students’ pitches and choose teams to support for the next 10 days while the students develop prototypes of their ideas, Ilia Dubinsky, founding director of the Skoltech Center for Entrepreneurship and Innovation, told them not to pull the punches.

“Don’t be soft on them: if something has been done badly, tell them so. Don’t assess them as student projects, but as fully-fledged projects developed by adults,” he said.

“Harsh feedback is also quite a useful lesson, and innovative companies have to live with it,” he added.

The mentors did not let Dubinsky down, with the projects eliciting a range of reactions, from outright criticism and skepticism to praise and mirth. 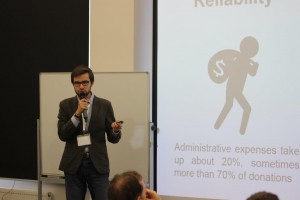 A student pitches his team’s idea for an app that makes it simple and secure to make charity donations.

A team presenting a device using a machine-learning algorithm to analyse whether people are at risk of heart disease was told by one pharma industry expert: “I’ve been trying to make this device for 15 years, and I can tell you: you’re not going to make it.”

The “electronic butler,” which would require users to scan their supermarket receipts and then scan the barcodes of food packaging when it is thrown away in order to help people keep track of what food supplies they have at home and what they need to buy, elicited some jocular scepticism. “I drink a bottle of wine and should scan it before I put it in the bin? Guys, this is for the German market!” laughed one mentor.

After the preceding series of blunt assessments of the feasibility of the projects, the two students presenting Matcher, a website for matchmaking people based on their HLA gene complex, looked apprehensive when the time came for feedback following their five-minute pitch. To their obvious relief, one of the mentors said he liked the idea, though he warned the market might be less receptive.

Another project that won praise from the assembled experts was the Poogalo glasses, which have an automatically adjustable focal length, eliminating the need for bifocals and different pairs of glasses. “That’s the most interesting idea I’ve heard [so far] today,” said Igor Pivovarov, a serial entrepreneur who represents the NeuroNet business accelerator and who founded the HemaCore medical devices company.

The aim of Tuesday’s event was to pair up the teams with mentors. Following the pitches, the mentors convened to decide who would take on which project, assigning two or three experts to each team. They will answer the students’ questions while the teams develop working prototypes during the next 10 days, and will assemble at Skoltech once again on September 23 to watch the final presentations.

The students were unfazed by any criticism voiced by the industry experts. “Our project is only at the beginning, so we need more feedback from real experts in the medical field and also from the field of entrepreneurship and innovation,” said Yulia Mitina, a biomed student who presented plans for a device that would use mobile ECG devices to measure people’s stress and alert them to visit a doctor when there is a risk of cardiac arrest.

“I hope we’ll go further and make a really good project,” Mitina, who is already a qualified doctor specializing in cardiovascular surgery, said after presenting her team’s project.

Anastasia Grigorieva, a fellow biomed student who co-presented the Matcher dating website, said she was excited to start acting on the feedback her team had received. “The feedback was very helpful because the mentors have a lot of experience in this area, and we have had just a few days in this area,” she said. “I liked that everything was very positive: no one just criticised it, but suggested new ideas and new features.” Grigorieva said the process of coming up with a startup project had not been easy, although the team members had had a lot of ideas. “We had a lot of problems, like we’d create an idea, we liked it a lot, then we googled it – and everything has been done already, without us,” she laughed. 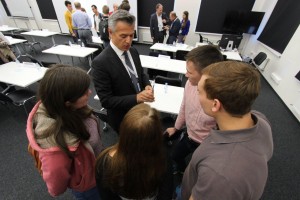 As well as frank criticism, the mentors had both praise and constructive advice for the students. Novica Mrdovic, managing director in Russia of NeoPhotonics, a U.S.-headquartered manufacturer of optoelectronic modules, told students the most important thing was that they had come up with ideas. “Business plans, negotiation skills, how to present: this is something that all of you can learn. None of us is born knowing how to write a business plan or how to do market research,” he said.

“But how to come up with an idea, no one can teach you, so I invite you to be creative. Be open to ideas. There are no stupid ideas – well, some you should keep to yourself – but be open to ideas and don’t take it badly if someone explains to you why it is not feasible,” he advised.

Speaking from his experience as a mentor at last year’s Innovation Workshop, Dmitry Kulish, founder and managing director of DrugDevelopment pharmaceutical consultancy, had some advice for the students on how to spend the next 10 days. “You should use this opportunity to define the vision of the project you would like to do. You got a lot of criticism, but you shouldn’t be discouraged. Define a niche inside your project that is doable for the next two weeks – and do your homework,” he told them.

Pivovarov said he was impressed by the quality of the presentations, but less so by the research on which they were based. “First try to talk to your customers to understand what they need, and then invent a product based on that,” he advised the student teams.He also had some specific advice for the students working on medical projects – an area in which the entrepreneur has significant experience. “The biggest challenge is always a single question: who will pay for this?” he said. “Who will pay for this and why do they need it?”

Dmitry Tsypin, another business expert with a background in health, said some of the projects were better than ones he has encountered in his professional life. He urged the students not to give up on the strictly regulated market of medical devices, and offered an alternative to market research-based product ideas. “The other approach is to teach the world, which Apple did. You have to explore both routes,” he told the students. “Maybe one of your ideas in the future will change the world,” he added. “Don’t be afraid to try to change the world.”