“Gathered here are the people who are creating the future,” said Deputy Prime Minister Arkady Dvorkovich, at the opening ceremony of the annual Open Innovations Forum. This year the Forum was held in the Skolkovo Technopark. Appropriately, this was the very first event to be held at the Technopark, which is the biggest in Europe. As an institute that is an essential part of the Innovation Center, and teaches Innovation successfully, Skoltech was present and active in the forum. 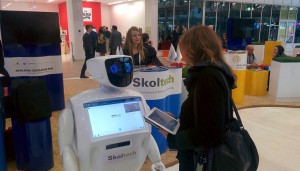 During the whole three days of the Forum, Skoltech stand was strategically placed next to the entrance to the main hall. Many by passers stopped at the stand to get to know about the institute, and to interact with our friendly robotic representative, Promobot. The stand was part of the Skolkovo Education Hub zone. This was the first step in revealing the new and exciting Skolkovo Education Hub initiative. The Hub is a cooperation between Skolkovo’s fairly young and strong institutions – Skoltech, the Skolkovo School of Management and New Economic School – designed to become a powerful center of gravity for entrepreneurs, economists and technologists. 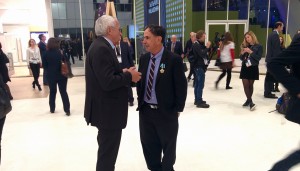 On the first day, during the Plenary Session titled “Technologies of the Growth: Security or Dreams Will Define the Further Technological Progress”, Skoltech alumna Ekaterina Kotenko presented her project that won the second prize at last year’s “SLUSH” conference pitching competition.

A short time afterwards, Skoltech’s Founding President, Professor Edward Crawley, received the Order of Friendship, from the Russian Prime Minister, Mr. Dmitry Medvedev. The order was awarded to prof. Crawley for his great contribution and fruitful activity in the field of science and education. The decision to award Crawley with the Order, was announced by President Vladimir Putin earlier this year, in May.

On the second day, Skoltech held a round-table session, titled “What is industrial internet?”. The session was moderated by Alexei Sitnikov, Skoltech VP for Institutional and Resource Development, and with the participation of Skoltech professor Evgeny Burnaev. During the session, industry leaders, investors, and leading scientists discussed telecommunications technologies of the Internet of Things and the opportunities that they offer to Industry 4.0. Refreshingly, this session was held as a conversation rather than a series of presentations. The speakers discussed the state of this growing market, which has yet produced a lot of success stories, and is still risky for investors. On the other hand, whoever is willing to take the risk first, will most likely get the most profits, or as speaker Viktor Polyakov put it: this market is like a mine field with gold bars in the middle of it. If you are ready to carefully step into the field, the bars will be yours. 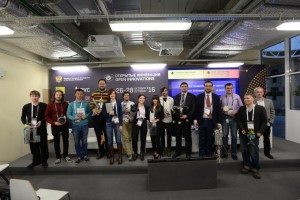 The speakers at the “Skoltech: Crossing “The Valley of Death” round-table session. 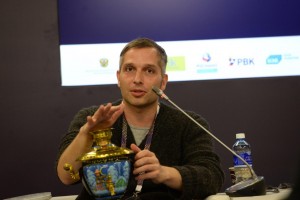 On the third day, Skoltech was engaged in two events. The first one was a round-table session dedicated to Skoltech’s fifth anniversary, and titled “Skoltech: Crossing “The Valley of Death”. The session was held in a talk-show format divided into 3 thematic rounds – Education, Research, and Innovation – 30 minutes long each. This session was the largest in the forum. Apart from the moderator Alexei Sitnikov, it featured 17 speakers from Skoltech, among them President Alexander Kuleshov and Professors Igor Krichever, Philipp Khaitovich, Alessandro Golkar and Artem Oganov.

Each speaker brought an interesting artifact related to their research: a robotic arm, a model of crystal structure, a shovel (used to dig soil for analysis) etc. Only prof. Khaitovich apologized that for obvious reasons he could not bring a brain to the session, so he brought a samovar instead, that symbolizes his research group’s collaboration with international scientists on brain research.

Using the objects and artifacts that they brought with them to the table, the speakers also presented their work and achievements at Skoltech. They also shared their outlook of Skoltech’s position and role in Russia, and of its future development and evolvement. Although the large number of speakers, each of them got their share of time to speak, and eventually the session was very dynamic, thorough and humorous.

At the same time, on a different hall, the “Start in Skolkovo” program held its selection procedure for this year. The Start in Skolkovo Program is run jointly by the Skolkovo Foundation, Skoltech and the Foundation for Assistance to Small Innovative Enterprises (FASIE). The program is aimed at supporting the development of innovative projects of the universities that are members of the International Proof of Concept Centers Association (IPOCA) in order to conduct the research necessary to verify the viability of scientific and technological solutions and their demand on the market. 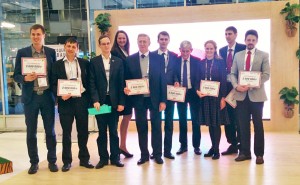 The winners of this year’s “Start in Skolkovo” program.

Alexander Safonov, Vice President for Academic Relations of Skoltech, Ekaterina Inozemtseva, Vice President for strategy and investment of Skolkovo Foundation and Vladimer Gverdtsiteli, principal specialist of management unit of FASIE, welcomed all participants and wished them successful presentations. The selection process attended 26 projects representing member universities of IPOCA. The participating projects were evaluated by highly qualified experts from Skolkovo Foundation, industrial companies and venture community. The event was closed by Ivan Bortnik, Advisor to the CEO of FASIE, who awarded seven best projects which were selected to the “Start in Skolkovo” Program. Besides financing with an amount of 2 000 000 Rub each, project teams will be connected to mentors who will assist in project development by elaborating milestones and deliverables as well as describing potential market opportunities for further commercialization. Two of the selected projects are from Skoltech: One supervised by prof. Yuri Popov and the other by prof. Albert Nasibulin. We congratulate them both.

These were great three days, and we are already starting to get ready for next year’s forum. Hope to see you there!