A joint scientific conference organised by the Skolkovo Institute of Science and Technology (Skoltech) and Massachusetts Institute of Technology (MIT) kicked off at the Skolkovo innovation centre on Tuesday, marking the biggest joint event hosted by Skoltech in the history of the two universities’ cooperation.

The two-day conference is titled “Shaping the Future: Big Data, Biomedicine and Frontier Technologies” and featured a packed programme of presentations by representatives of MIT, Skoltech and other leading institutes. Topics included multimodal brain mapping in the era of big data, and nucleic acid delivery systems for RNA therapy and in vivo genome editing.

Alexander Kuleshov, the president of Skoltech, a graduate research university that was set up in 2011 in collaboration with MIT, said the annual conference was a scientific landmark event.

“For the first time in our short history, we’re holding a conference of this size together with scientists from MIT,” he said at the opening of the conference at Skolkovo’s Hypercube.

“MIT and Skoltech teams worked together to select the key topics of this conference. We’re focusing on areas in which we’ve made some achievements,” he said, adding that Skoltech was “cast in the mould of MIT.”

“Collaboration with industry is growing, and Skoltech’s innovations ecosystem is now nurturing a new generation of entrepreneurs.” L. Rafael Reif, president of MIT.
MIT president L. Rafael Reif praised the faculty staff of Skoltech, describing them as “the true pioneers of this very important endeavour.” He paid tribute to Ed Crawley, Skoltech’s founding president, who handed over the reins to Kuleshov last year. Crawley, a professor of aeronautics and astronautics at MIT, came to Moscow to found Skoltech, armed – in his own words – with nothing but a laptop. Now Skoltech’s state-of-the-art campus is approaching completion, and the students are due to start the next academic year there.

“You all have a great deal to be proud of,” Reif told the conference. 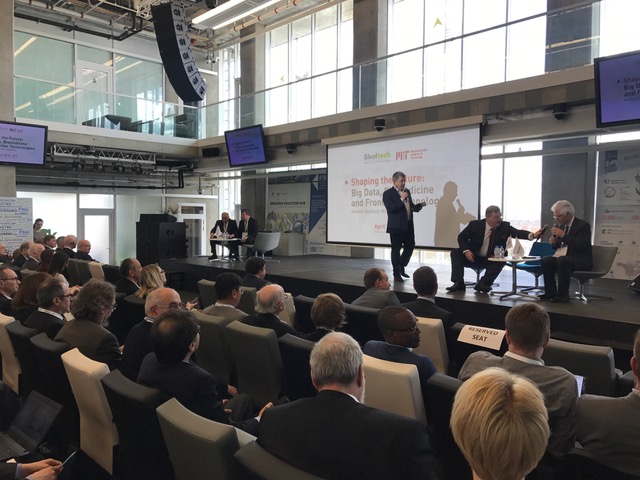 “Collaboration with industry is growing, and Skoltech’s innovations ecosystem is now nurturing a new generation of entrepreneurs.”

“Their vision and support have been vital for Skoltech’s growth so far, and they will be essential to its continuing success,” he said.

Dvorkovich was present at the conference’s opening, and welcomed participants to the joint event.

“Skoltech is an open university, a new university that wants to build a new model for cooperation in research, economics, management, innovation and other components of today’s developing world,” he said, emphasizing the government’s support for the institute.

“Russia is a vibrant and developing country, and the Russian government has prioritized the role of innovations in the development of our country,” he told the conference.

MIT president L. Rafael Reif (centre) prepares to put on a hard hat to tour the Skoltech campus, which is under construction. The state-of-the-art complex is due to open at the start of the next academic year. Photo: Sk.ru.

Like the Skolkovo project as a whole, Skoltech was conceived as an international institute from the beginning. The working language of the university is English, and the graduate students who study there come from all over the world, as well as from all over Russia.

“For us, this annual conference is an extremely important sign that Skolkovo and Skoltech have an important role to play in the international education community,” said Vekselberg.

“We see ourselves as an interface between the Russian scientific community and the international community,” he said. “We are always open and transparent and interested in partnerships and cooperation, because today, only through our joint intellectual efforts can we solve the serious tasks you’re going to discuss,” he told the conference.

Kuleshov also hailed international cooperation as the key to success.

“We are all aware that the Cold War is over, the Iron Curtain has dropped; a lot has changed in the last few decades,” he said. “Science has become truly international, and scientists have to gain experience working in international teams.”

Noting that MIT is recognised as a world leader, Skoltech’s president said he was especially pleased to say that “our guests include MIT professors who were born and educated in Russia.”

“One of the aims of creating Skoltech was to create an environment for entrepreneurial talent in our country,” said Kuleshov.

“In the long haul we’d like to create the conditions and environment to allow our young talents to stay here in Russia, to realise their professional potential here,” he said. Reif touring the Skolkovo Technopark together with Skolkovo Foundation president Victor Vekselberg (right) and Skoltech president Alexander Kuleshov. Skoltech was set up in 2011 in collaboration with MIT. Photo: Sk.ru.

“I will be happy if this conference helps us in the pursuit of this goal,” he said.

The Skolkovo Foundation and Skoltech were set up to help to create the necessary conditions for a culture of tech entrepreneurship in Russia – a so-called startup ecosystem – with the overall aim of transforming Russia’s economy from its dependence on energy exports to a hi-tech innovations-based model. To this end, and in keeping with the MIT model, Skoltech encourages its students to focus on commercial applications for their research findings, and to set up their own tech startups.

“Many universities focus on one kind of research: either fundamental or applied. I’m convinced that institutes like ours make the biggest different to society, because they emphasise that both can make a difference,” said Reif, citing recent breakthrough findings into Alzheimer’s disease achieved by an MIT professor.

“Through multidisciplinary research – from the most basic to applied – universities can shape the future by finding solutions to humanity’s great challenges,” he said.

In order to be of service to society, universities must not just educate innovators, they must be willing to innovate themselves, said Reif.

“I have every confidence that Skoltech is on that path,” he told the conference.

“It takes time to develop the full strength of a great university. President Kuleshov is Skoltech’s second president; I am MIT president number 17. But from what I see here today, in the race to greatness, I believe you have a tremendous head start.”