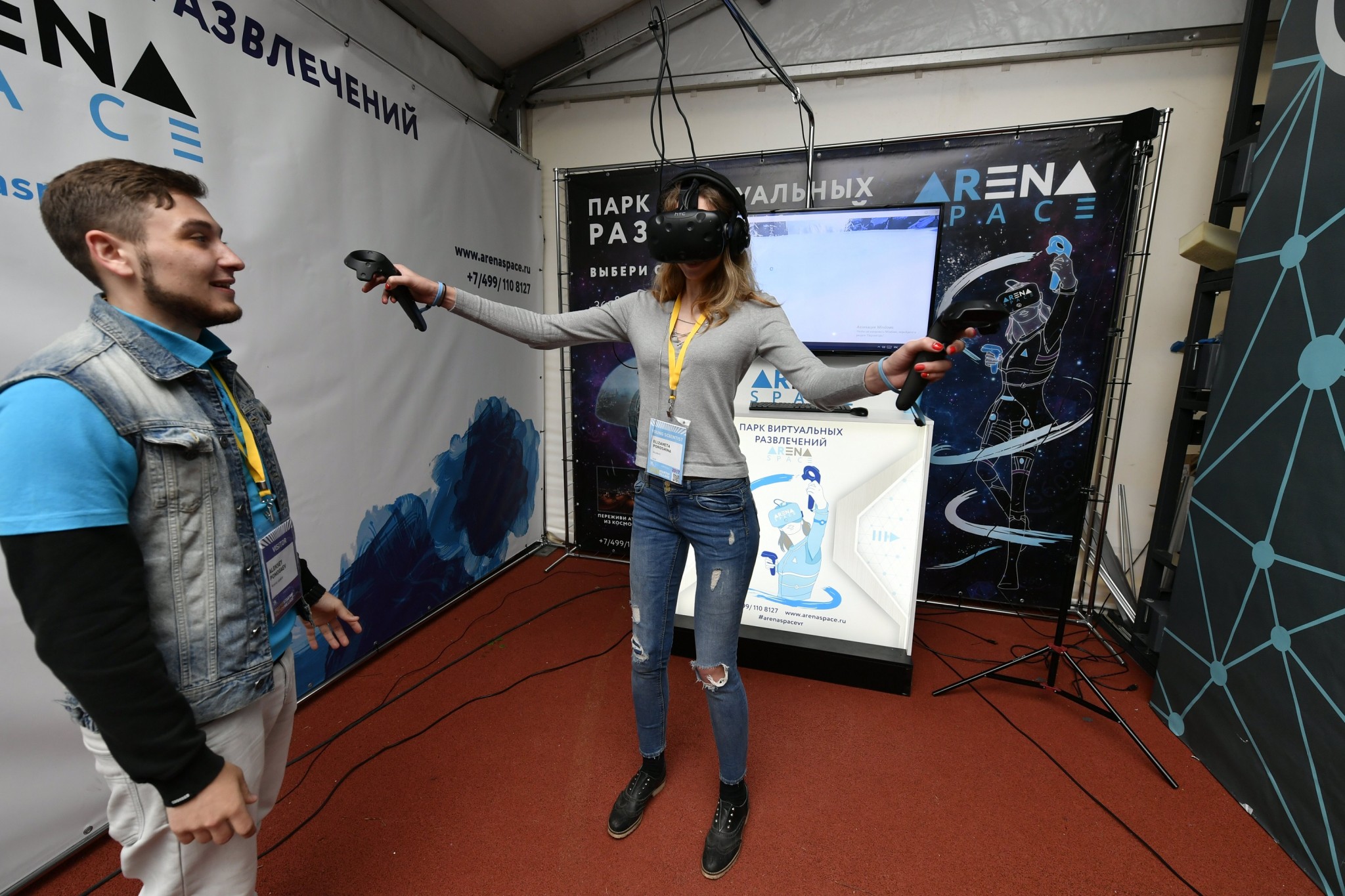 A student tests out virtual reality gear at the Skolkovo Startup Village, where Skoltech took the opportunity to show the many facets of its learning-by-doing philosophy.

“All my professional life I have grappled with one fundamental question,” Skoltech President Alexander Kuleshov said before a large crowd of education enthusiasts in early June. “The question is: what should take priority in higher education: fundamental knowledge or skills?”

Kuleshov was speaking as part of a panel of illustrious academics from Russia and abroad that convened to discuss universities of the future during the annual Skolkovo Startup Village, a largescale event that draws together thousands of scientists, entrepreneurs and investors for two days of lectures, meetings, panel discussions and festivities.

“My opinion on this issue has always been absolutely unambiguous,” Kuleshov continued. “And the more time passes, the more I stand assured that it is true. Of course, the answer is fundamental knowledge.”

To illustrate his point, the Skoltech president referred to the example of programming language. A specific type of programming language may be cutting-edge right now, and may be incalculably valuable on today’s job market, but the industry is rapidly evolving, so these skills will likely be outdated – if not obsolete – in just a few years’ time.

That said, he noted that knowledge is nothing without the skills to back it up. “In my opinion, we have to focus on knowledge first and foremost, but we have to do so bearing in mind that without skills, knowledge alone won’t get our students anywhere,” Kuleshov said.

Russian Deputy Education Minister Grigory Trubnikov echoed this sentiment, stating that while fundamental knowledge isn’t sufficient in itself, it is imperative. “I agree with Alexander [Kuleshov] that a person who has a very good fundamental education will be able to change dynamically in line with economic and market trends,” he said during the panel.

Skoltech has struck a balance between these two priorities by relying on a learning-by-doing philosophy. In addition to their courses where students learn theory from the world-renowned scientists and innovators that comprise Skoltech’s faculty, students participate in labs and internships, giving them the opportunity to gain practical experience.

“One of Skoltech’s tasks is innovation, and there is no innovation without certain skills. But these skills emerge from the process of learning by doing,” Kuleshov said. “I’m not talking about lectures and seminars on the current hot tech topics. I’m talking about students acquiring an understanding of what the industry means as a whole.”

This philosophy has set the institute apart from other technical universities in Russia and abroad, and has earned it heaping praise from dignitaries, faculty members, industry leaders and students alike.

A recent event that symbolized Skoltech’s learning-by-doing principle was the launch of a state-of-the-art laboratory during the Startup Village by Skoltech’s Center for Hydrocarbon Recovery.

“The idea behind having a technical university at Skolkovo is for this center of learning and science to transform fundamental knowledge into practice,” Russian Deputy Prime Minister Arkady Dvorkovich said upon the opening of the lab.

A day later, Skolkovo Foundation President Victor Vekselberg lauded the capability of the same lab to provide students with valuable, hands-on experience. “As a Skoltech laboratory it will be open to students as part of their education, giving us young specialists in possession of the most cutting-edge knowledge, in the greatest demand,” he said.

Skoltech faculty members have made clear their dedication to teaching students to learn by doing.

Alessandro Golkar, a Space Center professor who is currently taking a two-year sabbatical to serve as Vice President of the Concurrent Engineering, Technology Planning and Roadmapping unit of multinational aerospace and defense giant Airbus, said that hands-on work was a key element of his popular Systems Engineering course at Skoltech.

“The idea of the course is to give the students hands on experience with what it means to apply systems engineering in real projects,” Golkar said in an interview during the Startup Village. “This is the crucial thing – it’s not just about learning theories from texts; it’s about actually applying them, so you learn by doing. That’s the philosophy.”

“If you would like to get a good job, the first thing your future employer will ask about is your practical experience,” Tsetserukou said. “There’s a huge demand in Russia for high-quality engineers right now. So to get a job with a good company, students must prove that they have practical engineering skills. When I recruit new members for the robotics team, I motivate them by explaining that the only way to gain these skills is by making a real robot. A project like reSET gives them the opportunity to gain skills that they wouldn’t get in any other setting, i.e. simultaneous localization and mapping (SLAM), computer vision, control systems and system architecture.”

During a panel discussion at the Startup Village about the upcoming Skoltech Esports Academy, Tsetserukou reiterated this point, adding that acting as a member of the robotics team gives students all of the core knowledge and practical skills they will need to launch a successful startup upon graduating.

Skoltech students have likewise commended the institute for providing them with opportunities to supplement their theoretical knowledge with practical experience.

Oleg Shipitko, reSET team captain, said that he was drawn to Skoltech in general and to its robotics laboratory in particular precisely because of the unparalleled opportunities to learn by doing.

“I wanted to get more practical experience, because at my previous university we had a lot of theory, but we didn’t have real opportunities to apply it,” Shipitko said. “That’s why I joined Skoltech’s robotics lab, because it seemed to be highly practical.”

Garzaniti describes his practical lab work as a key highlight of his time at Skoltech.

Another Italian student, Raffaele Gradini, who will graduate this week with an MSc in Space Systems and Technology, had the opportunity to share some of his practical experience during the Startup Village at a panel called The Power of Artifact, where young scientists share their research using creative objects ranging from broccoli to shovels.

“Here at Skoltech we apply a lot of the learning-by-doing approach,” Gradini said. “By rapidly prototyping our concepts, we were able to better tackle issues, understanding what the strengths and weaknesses of our work were. One of the great things about Skoltech is that during all of our studies, our professors encouraged students to try building models to see how they behave. I found this approach to be very useful, and now that I’m about to leave Skoltech, I look forward to bringing it with me into the industry.”

The many facets of Skoltech’s successful implementation of the learning-by-doing philosophy were on display during the Startup Villages. Check out the following photos to learn more: 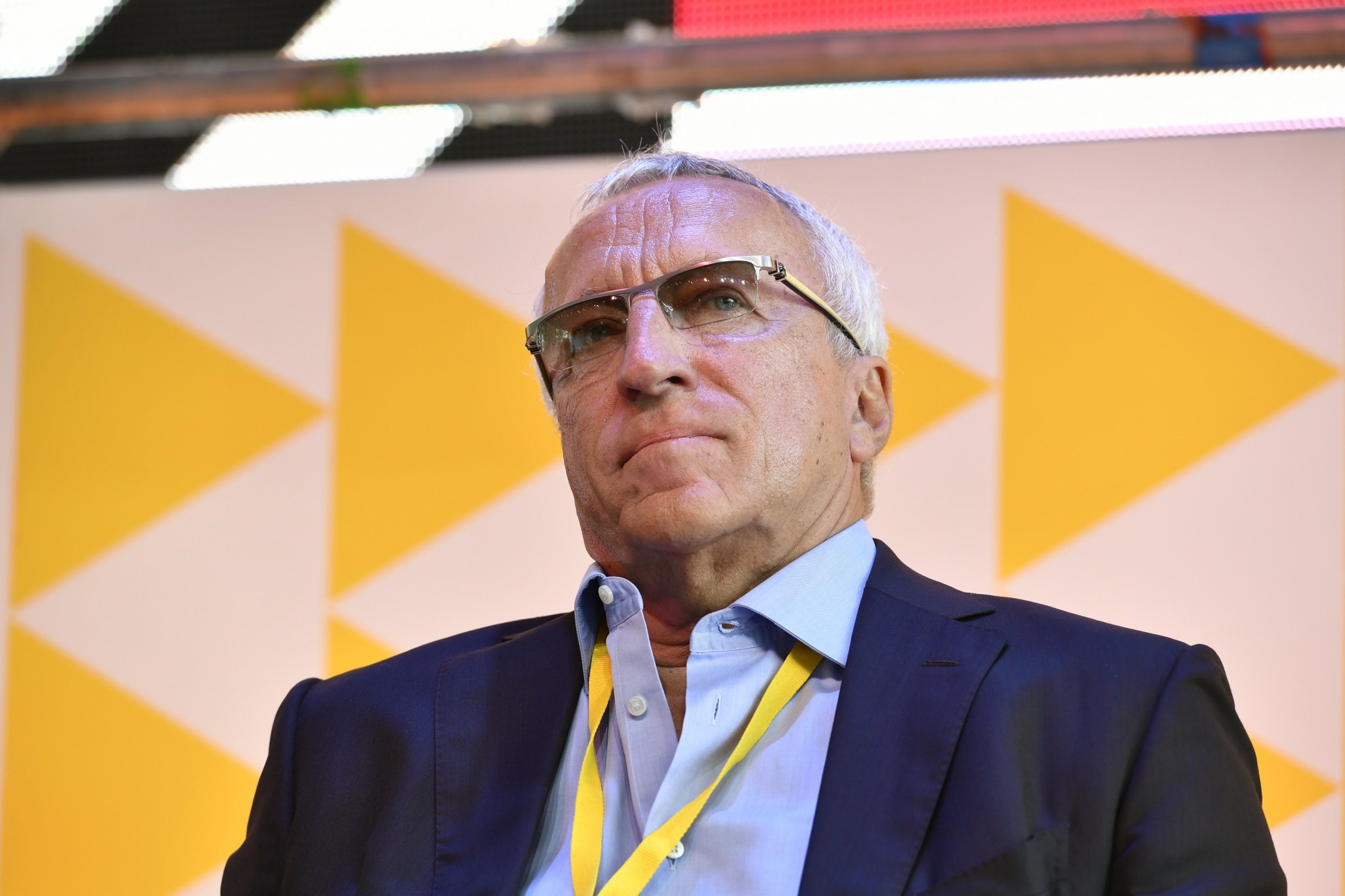 Skoltech President Alexander Kuleshov pictured during a panel at the Skolkovo Startup Village on universities of the future. 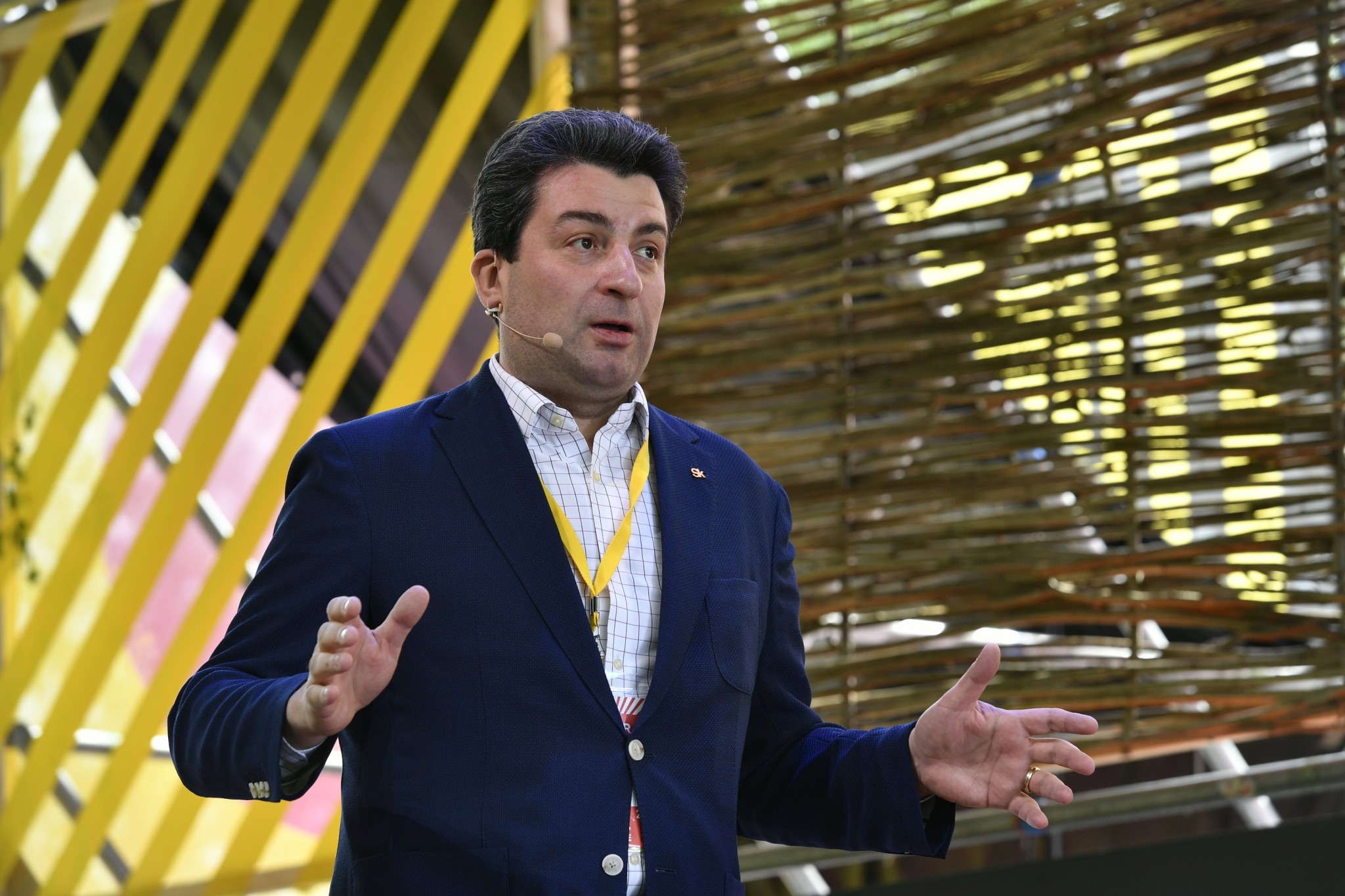 Skoltech Vice President of Institutional and Resource Development Alexei Sitnikov moderating the panel on universities of the future. 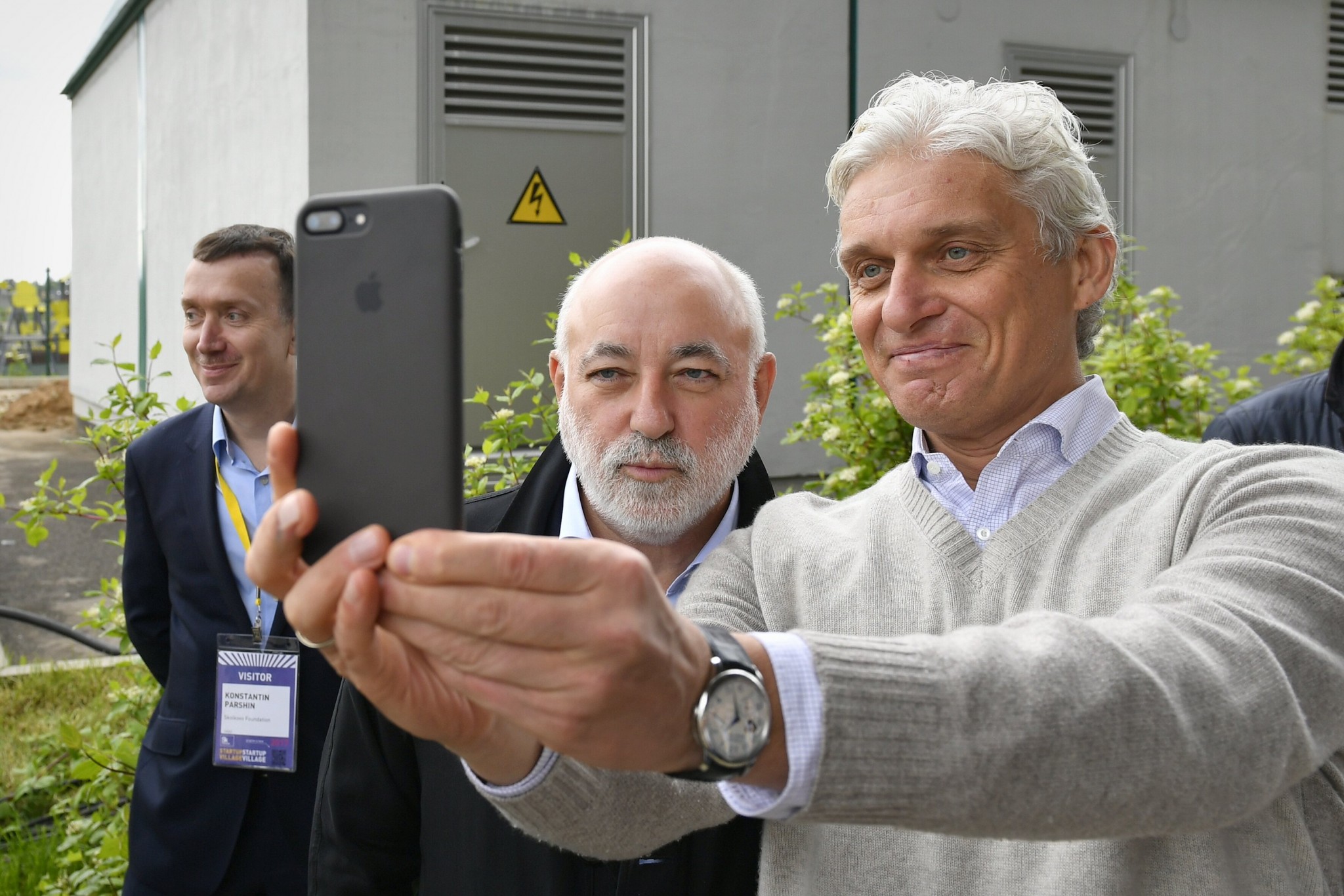 A Skoltech student shares information about the institute’s course offerings during the Startup Village. 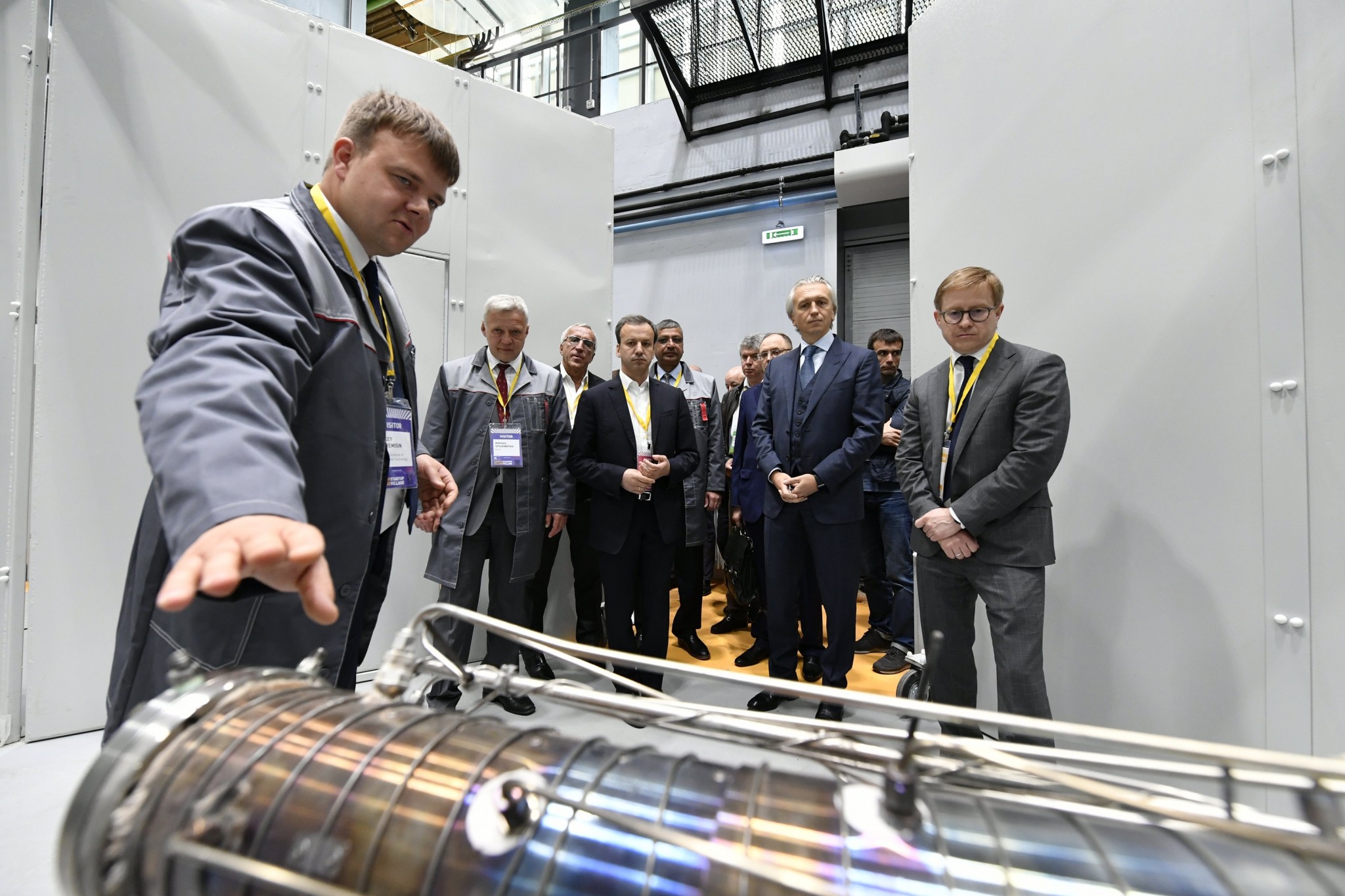 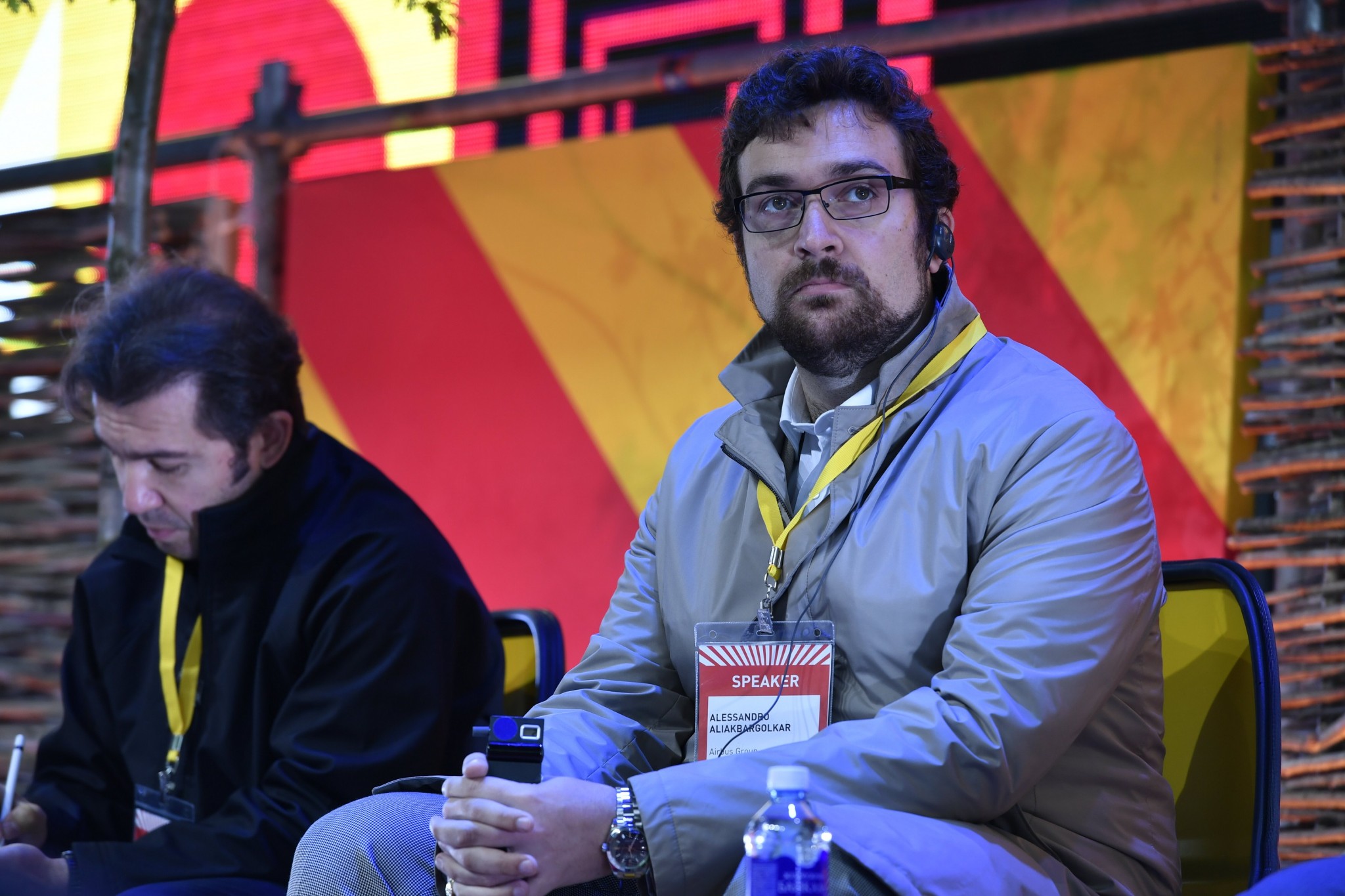 Alessandro Golkar, a Space Center professor who is currently taking a two-year sabbatical to serve as Vice President of the Concurrent Engineering, Technology Planning and Roadmapping unit of multinational aerospace and defense giant Airbus, pictured during a Startup Village panel on market competition.

Attendees kick back and relax during the Startup Village. Skoltech students participate in the Artifact panel at the Startup Village. Game Enders President and Power Play CEO Asi Burak speaks during a panel on the launch of the Skoltech Esports Academy. The movers and shakers behind the Skoltech Esports Academy speak before a rapt audience during the Startup Village. Members of Skoltech’s award-winning robotics team reSET and renowned Artificial Intelligence expert Professor Bernd Radig of the Technical University of Munich (second from left) participate in a robotics panel at the Startup Village. 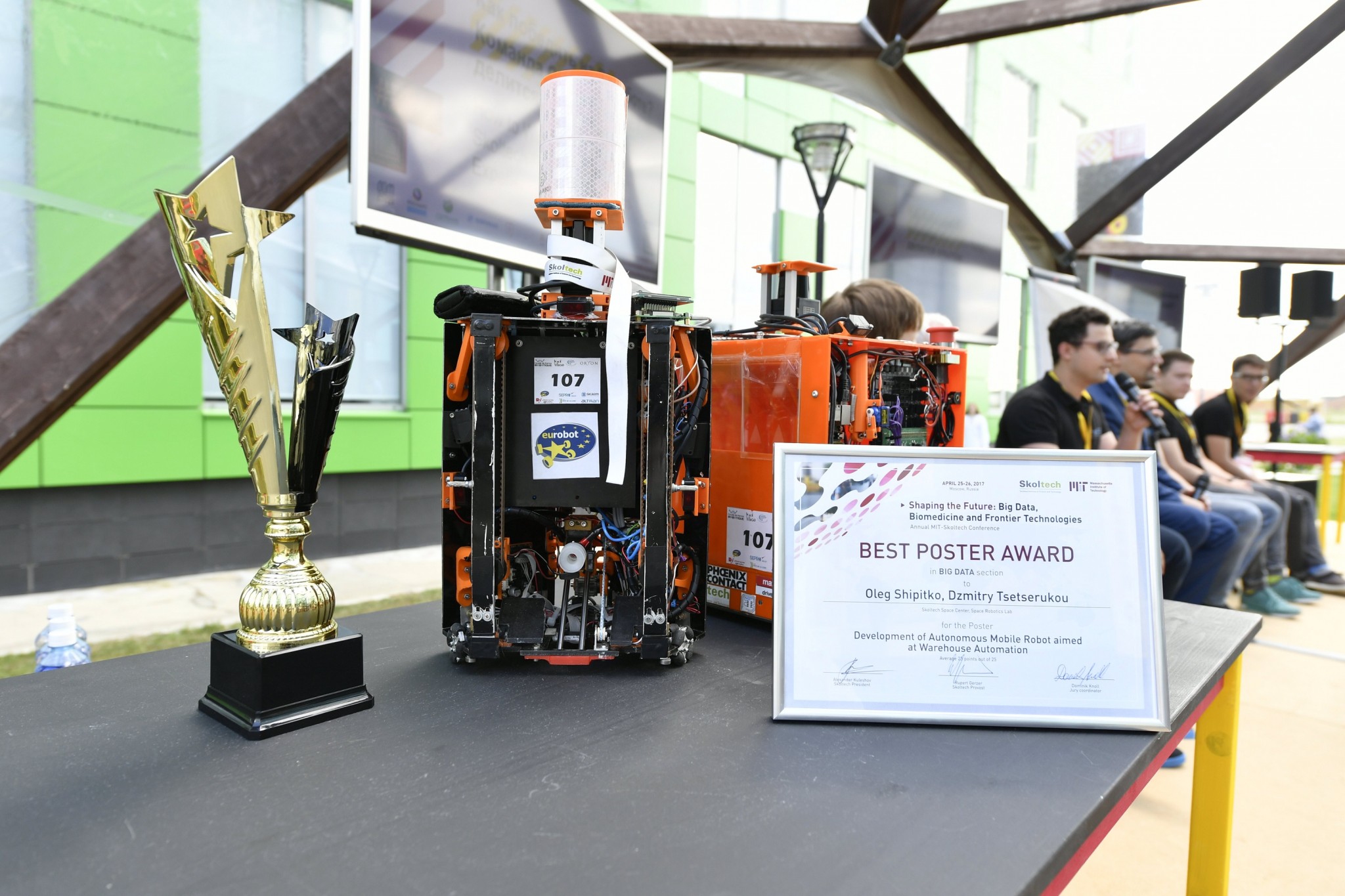 The reSET team’s award-winning robots, along with various of the trophies and certificates the team has won.