Driven by the desire to spur innovation in the Russian agricultural sector, Skoltech last year began to lay the foundations for an agricultural educational track

To bolster the initiative, a delegation from the institute headed south to Israel to learn more about how the small desert nation has succeeded in developing a flourishing agricultural sector despite water scarcity and limited land resources.

At the time, the delegation – which included President Alexander Kuleshov and Center for Life Sciences (CLS) Director Konstantin Severinov, among others – visited some of Israel’s leading educational institutes.

The Skoltech bigshots aren’t the only ones who have done the rounds in Israel. In 2016, three Skoltech biotech students participated in a summer course at the Manna Center. In 2017, four of their counterparts followed suit, combining summer courses with industrial immersion in Israeli agricultural high-tech start-ups.

This summer, four more students from the CLS carried on the tradition by visiting research powerhouses Ben Gurion University (BGU) and Tel Aviv University (TAU), and gaining firsthand experience in planting and harvesting crops against all environmental odds.

When all four of this year’s batch of students matriculated at Skoltech, they came armed with a wealth of agricultural knowledge. All studied at the Russian State Agricultural University, and all came to Skoltech after learning about the plans of the CLS to create an agricultural track.

We caught up with them to learn about their immersive summer in Israel, as well as with Professor Ilya Gelfand, who has helped make the Skoltech exchange a reality. 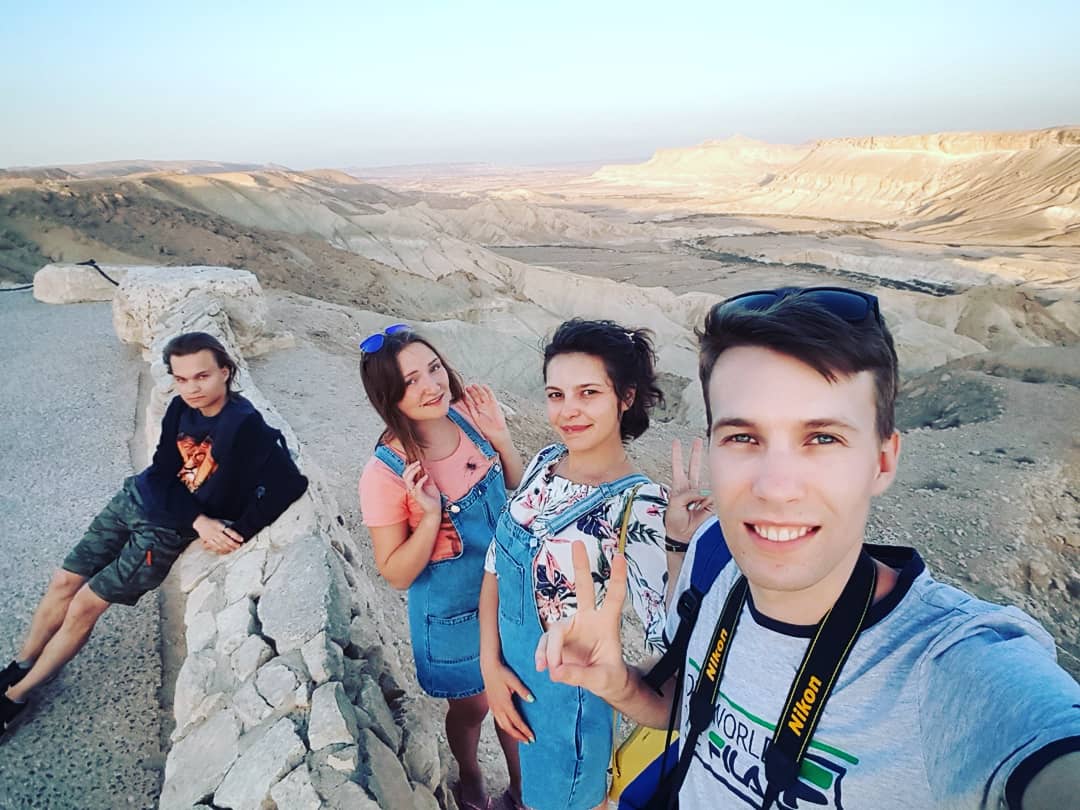 //Learning to simultaneously harvest fish and vegetables with Alexander Polkhovskiy

Asked what his dream job would be upon graduating from Skoltech, Polkhovskiy said, “I’d like to do anything that unites biotechnology methods with agriculture – anything that fuses science with the means of planting, developing and harvesting crops.”

So when the opportunity emerged for him to spend the summer learning about some of Israel’s most unusual and cutting edge agricultural techniques, he didn’t need to be convinced.

While at BGU, he focused his research on carotenoid synthesis in algae. “I’m particularly interested in plant biology, so I wanted to learn more about the field, and algae is part of that,” he said.

Polkhovskiy spent the first half of the summer gaining practical experience in the lab, and the second half taking courses at BGU.

“We learned a lot about how to grow crops in the desert, and how to plant and harvest them sustainably by reusing resources, recycling, etc. Our courses covered a very vast range of different spheres and fields of agriculture, from soil science to plant physiology to molecular biology,” he said.

His favorite part of the experience was learning inventive agricultural techniques that previously he would have struggled to even imagine.

“I was particularly inspired by aquaponics – the simultaneous raising of fish and growing of vegetables. It’s a completely sustainable agricultural method; all you have to do is feed the fish,” he said. Other highlights for him included the friends and new experiences he gained.

Prior to matriculating at Skoltech, Stepanova earned her Bachelor’s degree in Agriculture. She saw the Israel program as an excellent opportunity to learn about the latest agricultural innovations.

“Israel is famous for its tech sector, and that includes agricultural technologies. They have succeeded in growing a lot of valuable crops in extreme desert conditions. My main aim in going to Israel was to increase my professional skills and to gain new knowledge and experience,” she said.

Upon returning to Skoltech, she was thrilled with how much knowledge she gained from the Israel experience.

“I learned a lot about drip irrigation systems – about how to use water effectively. Also I learned a lot about the cultivation of date trees, jojoba, dragon fruit, olives, pomegranates and salicornia. We had numerous excursions to different farms among the Negev desert to see different ways of cultivating crops, and various agricultural techniques,” she said.

//Sampling all that Israeli agriculture has to offer with Valeria Mitsurova

Mitsurova was attracted to Israel because of the capacity of its agricultural sector to harvest high-quality crops despite its environmental nuances.

“People in Israel grow vegetables and fruit of the same quality as in other countries, but in conditions absolutely unsuitable for this purpose. It was interesting to learn and see for myself how that process takes place,” she said.

She spent her summer at BGU, where she studied sustainable agricultural solutions – a broad topic that included sections on micrometeorology, water science, algae research and more.

She also conducted research at the Ramat Negev AgroResearch Center on the impacts of bacterial diseases and viruses on tomatoes.

In addition, she gained a plethora of unique, hands-on experience: “In a fish breeding laboratory I researched bacterial infections in fish; in an algae research lab I observed algae residue under a microscope; and in a soil science lab we defined the pH and other indicators of various types of soil,” she said.

For her, the best part of the summer was learning how Israel deals with its limited fresh water resources. “Israel relies on four approaches to increasing its fresh water, both for drinking and agricultural purposes: sewage treatment, desalination of sea water using reverse osmosis, desalination of water extracted from subterranean and land-based sources, and the re-cultivation of polluted or salt water sources,” she said.

Bogomolov came to Skoltech with a background in horticulture, so when offered the opportunity to spend his summer immersing himself in agriculture and molecular biology, it was an easy choice, and he was thrilled with the outcome.

Unlike the others, he did not spend the summer at BGU. He stayed in Tel Aviv, where he focused on the hues of watermelon flesh with a company called Origene Seeds, with whom TAU and Skoltech connected him.

“I spent the summer working on a project that involved validating watermelon flesh color molecular assays based on SNP markers, which makes it possible to distinguish canary yellow from red watermelon, and allows us to confirm flesh color without actually observing the fruit, thereby making the plant breeding process easier and faster,” he said. 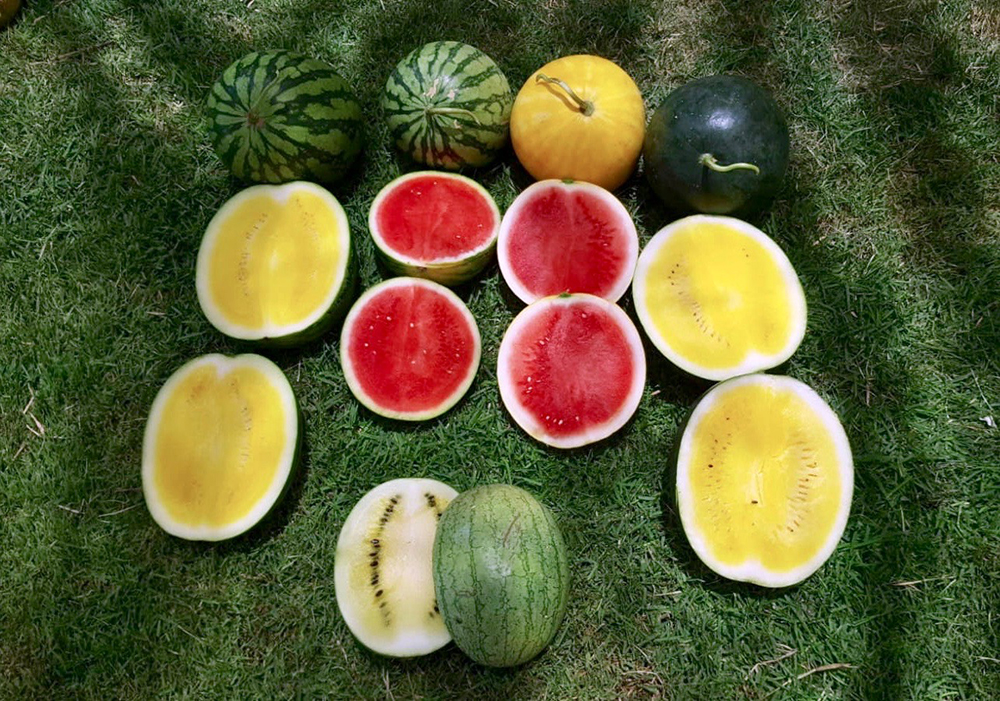 Asked what he enjoyed most about his time in Israel, Bogomolov pointed to the invaluable learning experience.

“Previously I knew a bit about marker-assisted selection, but I had never worked with it, and now I know how to create and work with several different types of molecular markers. It was also very useful and valuable for me to work with an innovative company and to experience the real world, plant-breeding process first hand,” he said.

//Making it all happen with Professor Ilya Gelfand

At BGU, Gelfand specializes in Bio-Geochemistry and Ecosystem Ecology. While he’s not immersing himself into the art of how ecosystems behave, he keeps busy bolstering international academic ties.

“Everyone in science wants to collaborate. The more you collaborate with different people in different countries, the better your projects will be,” he said.

Asked why he had pursued a partnership with Skoltech in particular, he said: “Skoltech attracts the best students from across Russia. Russia’s a very large, and based on statistics, they get the best students in their programs. I’ve spent many years in the United States and abroad, and I can say objectively that Skoltech students are very good. My goal in developing this program was to attract good students to Israel, and to show them what we do here.”

He added that he hopes this young partnership with Skoltech will blossom into a full blown joint MSc program.

Based on the experiences of this year’s batch of visiting CLS students, it seems clear that Gelfand has succeeded in his goal of showing Russia’s young and tech savvy next generation of agricultural experts just how much Israeli agricultural technology has to offer.