On a chilly late-spring morning, a dozen or so graduate students and researchers from as far afield as India, Italy and Mexico descended on a remote Russian village hundreds of kilometers northeast of Moscow, gathering on an overgrown field framed by abandoned buildings.

Their unlikely goal: to launch balloons into the stratosphere.

This, followed by several hours spent traversing two Russian regions, driving along pothole-riddled back-country roads and trekking through virgin wilderness in search of the materials that had fallen from the balloons, was the culmination of Skoltech’s popular Systems Engineering (SE) course.

In recent years, the course has been led by Professor Alessandro Golkar of Skoltech’s Space Center.

In April, Golkar announced his decision to take a two-year sabbatical to serve as Vice President of the Concurrent Engineering, Technology Planning and Roadmapping unit of multinational aerospace and defense giant Airbus.

In his absence, Professor Clement Fortin, also of the Space Center, will take up the reins.

Ahead of the changing of the guard, we’re taking a look back at the highlights of Golkar’s last SE course at Skoltech, at least for the time being.

In the context of systems engineering, “systems” refer to collections of separate elements that combined can produce results that alone would be unattainable. An Airbus A380, for example, is a system composed of a broad variety of separate elements, from its wings to the component parts of its engine.

In systems engineering, researchers and engineers focus on the combined whole rather than individual elements. In so doing, they take an interdisciplinary approach to the design, engineering and management of complex systems. A team of Skoltech students prepare to release a stratospheric balloon. Photo: Skoltech.

But why stratospheric balloons?

Upon beginning the course, students are tasked with designing stratospheric balloon missions, with the goal of flying an optical payload to the stratosphere to retrieve data that they are then expected to process as part of Skoltech’s Geomatics for Earth 3D Reconstruction and Monitoring course.

“Basically a balloon campaign is a complex mission with a lot of ambiguity,” Akhtyamov said.

“Most of the usual course projects have a direct cause-and-effect link. With stratospheric balloons a lot of things depend on the weather, teammates, air traffic control services and other things. So the students need to consider a lot of risks, which closely mirror real-world projects. Also ballooning is usually not familiar to students. For most of them, it is a totally new field, so they can’t just rely on their previous experience; they need to get out of their comfort zones,” he explained.

In line with Skoltech’s learning-by-doing principle, students enrolled in the SE course are actively responsible for developing and executing a comprehensive systems engineering management plan.

“The idea of the course is to give the students hands on experience with what it means to apply systems engineering in real projects,” Golkar said during a recent interview. “This is the crucial thing – it’s not just about learning theories from texts; it’s about actually applying them, so you learn by doing. That’s the philosophy.”

This hands-on approach has proven to be a major draw among students.

“I was curious to see how Skoltech approached the subject because Space Systems Engineering is my field,” said Nicola Garzaniti, a visiting MSc student from the Polytechnic University of Turin in Italy.

“Skoltech’s approach is different than what I’ve experienced in Italy and Western Europe because there are practical activities that occur in the Masterskaya Lab, and in Italy we never went to the lab to do practical things, because the engineer is less of a technician there and more of a manager. So if you need a component part in Italy, you just have to ask the lab technician and wait a couple of hours,” he said, adding that the hands-on lab work was his favorite part of the course.

Simone Briatore, a Skoltech PhD student also from Italy who served as a TA in the course, reiterated this point.

“I love the practical approach to the course, because many places do space systems engineering from a really theoretical point of view, and that’s good but at some point it doesn’t give you a comprehensive understanding of the importance of certain procedures and documentation. A lot of that stuff can seem a bit useless without context. But when you start to have problems because of a lack of documentation and a lack of preparation, you realize how important it had all been,” Briatore said.

In addition to the lab work, Garzaniti lauded Skoltech’s comparatively small class size. “Whereas a similar course I participated in in Italy had teams of about 15 people, this course only had about four per team. It’s quite different. You start to appreciate the team work, and the fact that team work may be more important than individual skill for success in the course,” he said.

Not just for Space students, but not for just anyone

Though the course falls within Skoltech’s core Space curriculum, Golkar emphasized that Space is only one of the possible applications of the tools used in the course. This year’s group included five Space students, and three students from among Skoltech’s other academic tracks (excluding Garzaniti, as he is a visiting student).

That said, not just anyone can enroll in the course. In order to ensure genuine interest and reliability, Golkar requires students to submit applications. Teamwork is imperative to success in Systems Engineering. Photo: Skoltech.

As explained by TA Akhtyamov: “Before joining SE, everyone needs to write a small essay explaining why they want to take the course. If students don’t have strong motivation, it’s easy to lose focus. And the course requires a lot of team work, so if a student leaves, even early into the term, that would create a lot of problems for the other team members.”

Golkar explained that student dedication and independence is central to his teaching ethos. “My philosophy in teaching classes is that I am guiding you down the path and giving you the tools, but it’s you who does the job; I’m not going to force you to do things. In order to do this, you need to be practically independent,” the professor explained.

Ultimately, the teams sent their payloads into the stratosphere and back with barely a hitch.

To complete the missions, they worked with Denis Efremov, head of the aerospace laboratory at the Moscow Technological Institute. Efremov runs a stratospheric-balloon-based side project called Near Space, as part of which he offers to organize launches in the Russian countryside. His services included obtaining a plethora of permits from various regional authorities that may otherwise take issue with a team of students using their land as a base from which to pierce Earth’s atmosphere.

After assembling at dawn for a four-hour drive, the SE team arrived at a tiny, half-deserted village in the Yaroslav Region. The students promptly set to work assembling their payloads while Efremov prepared the massive balloons for launch.

Both balloons took off without issue, and the payloads – being of similar weight and carried by the same winds – traveled together to a forested expanse in the Ivanovo Region. Once the vans transporting the crew traveled as far as they could by road, the teams of students trekked out into the wilderness, relying on shoddy GPS signals to map their journeys.

One team found their payload within minutes of arriving, while another spent about an hour and a half trudging through swampy meadows, all the while being devoured by clouds of ravenous mosquitos. The teamwork that had carried the students through the course was palpable during the retrieval. Rather than bemoaning the difficulty of their circumstances, the students and TAs alternately strategized and joked together to keep up their spirits until the final payload was found.

By attracting individuals with sincere commitment to the course, Golkar fostered an environment conducive to the sort of solid teamwork that students expect to encounter after they graduate and move on to industry jobs.

As explained by Shreya Santra, an MSc student from India who is enrolled in Skoltech’s Space track: “My main motive for taking this course was to understand how real space projects work – how the team is managed, and how we use different tools for systems engineering.”

Looking back, Santra is satisfied that she accomplished this goal. “We used real tools that are actually used in space missions. The concurrent engineering lab that we have here at Skoltech is very well equipped, and we worked together on a team just like we would have in a real space project. Also the different tools we used for designing and making the prototypes of the payloads are concurrent and close to what’s used in professional space projects.”

Scroll through the photos below to see what it’s like to launch a balloon into the stratosphere! A team of students, including (from left) Anastasia Stelvaga, Olga Danko, Nicola Garzaniti and Raffaele Gradini prepare their payload for launch. Photo: Skoltech. Ilya Yuskevich and Ksenia Smirnova work on their payload as they prepare to launch. Photo: Skoltech. Miguel Cabrera and Shreya Santra use the back of a van as a workspace while preparing their team’s payload. Photo: Skoltech. Simone Briatore prepares a drone that will be used to capture footage of the launches. Photo: Skoltech. 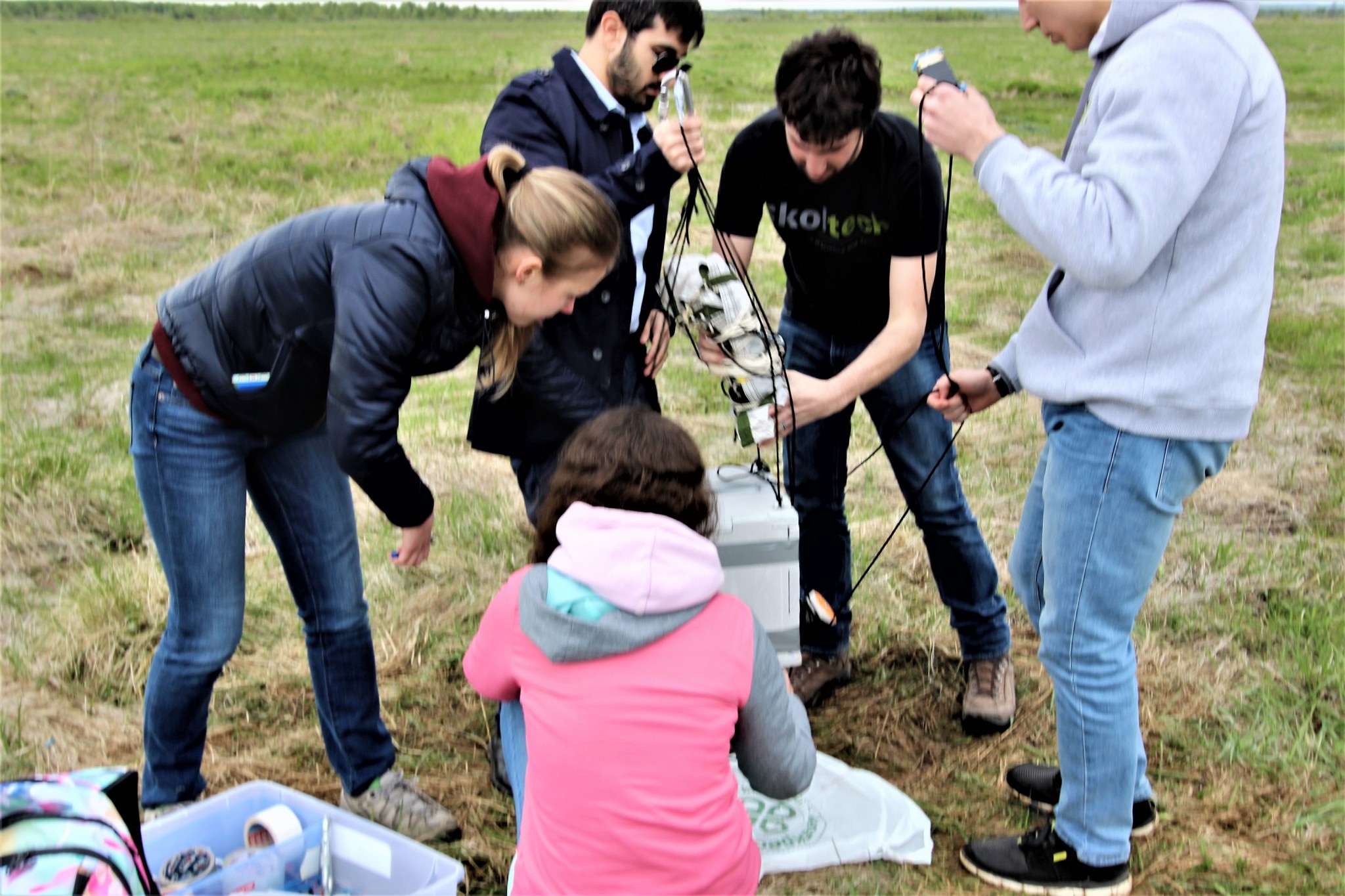 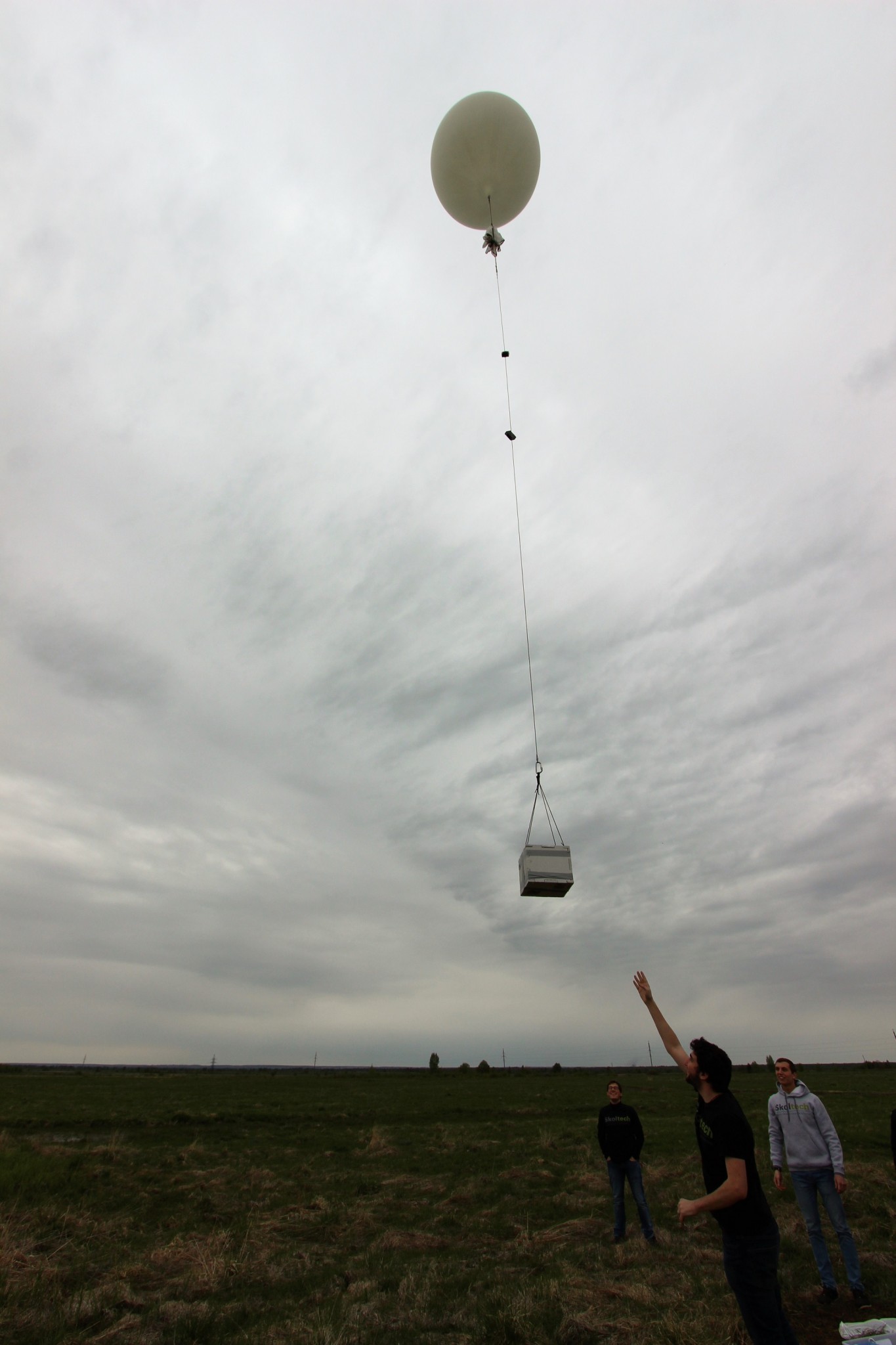 A balloon sails toward the stratosphere, moving in a vertical line thanks to the low winds that day. Photo: Skoltech. 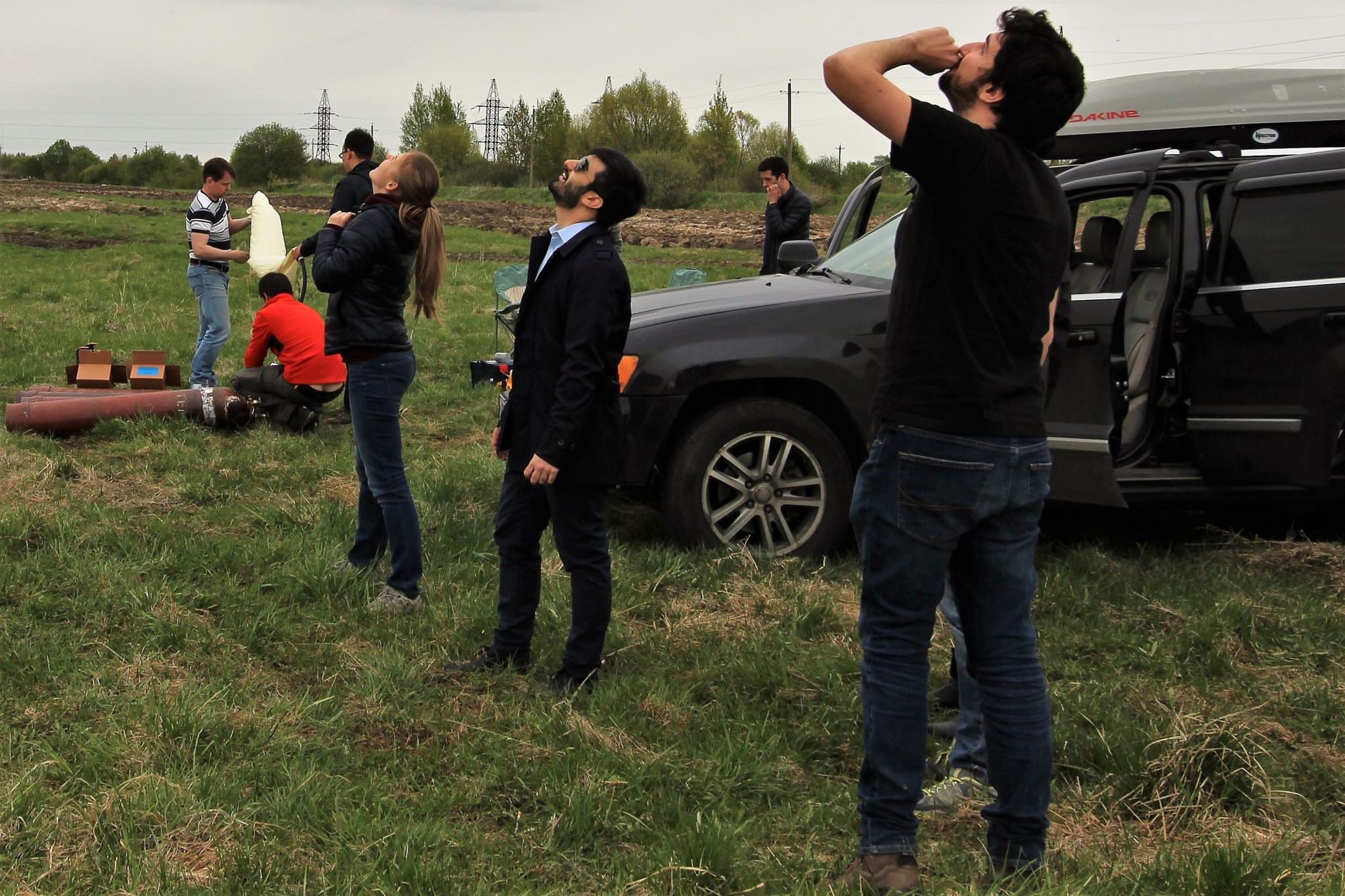 With the balloons safely afloat, the Skoltech crew thought it was in the clear. But alas, one of their vans got stuck in the mud, requiring the team spirit SE is known for. Photo: Skoltech. After the payloads landed, the students tracked them using GPS to a forested expanse in the Ivanovo Region. Nearby road conditions prevented the vans from driving the whole distance, so the teams went the rest of the way by foot. Photo: Skoltech. 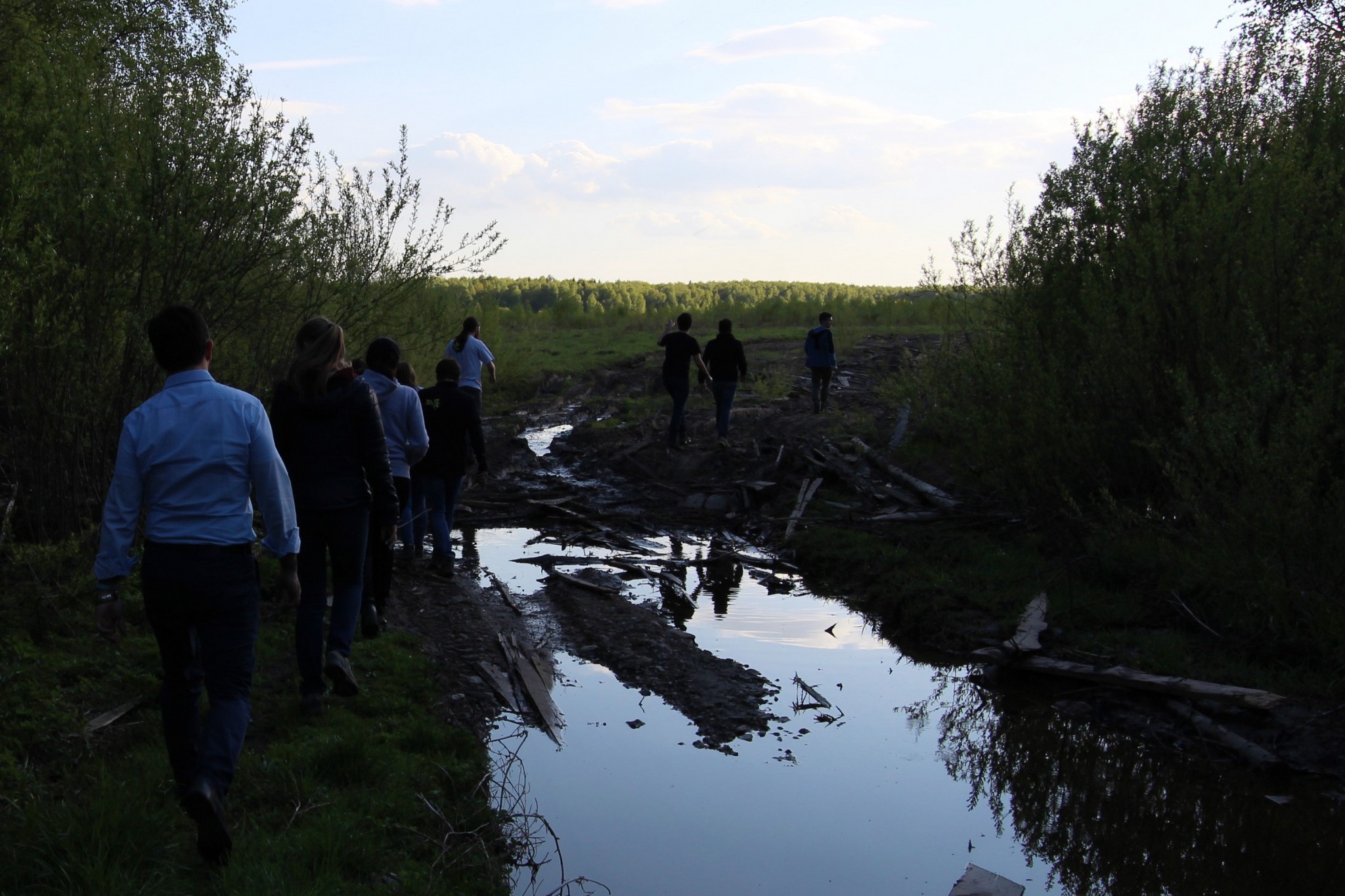 Things weren’t quite as simple for the second team, but they remained undeterred in scouting out their payload. Photo: Skoltech. At long last, Raffaele Gradini spotted his team’s payload in a patch of meadow. Photo: Skoltech. 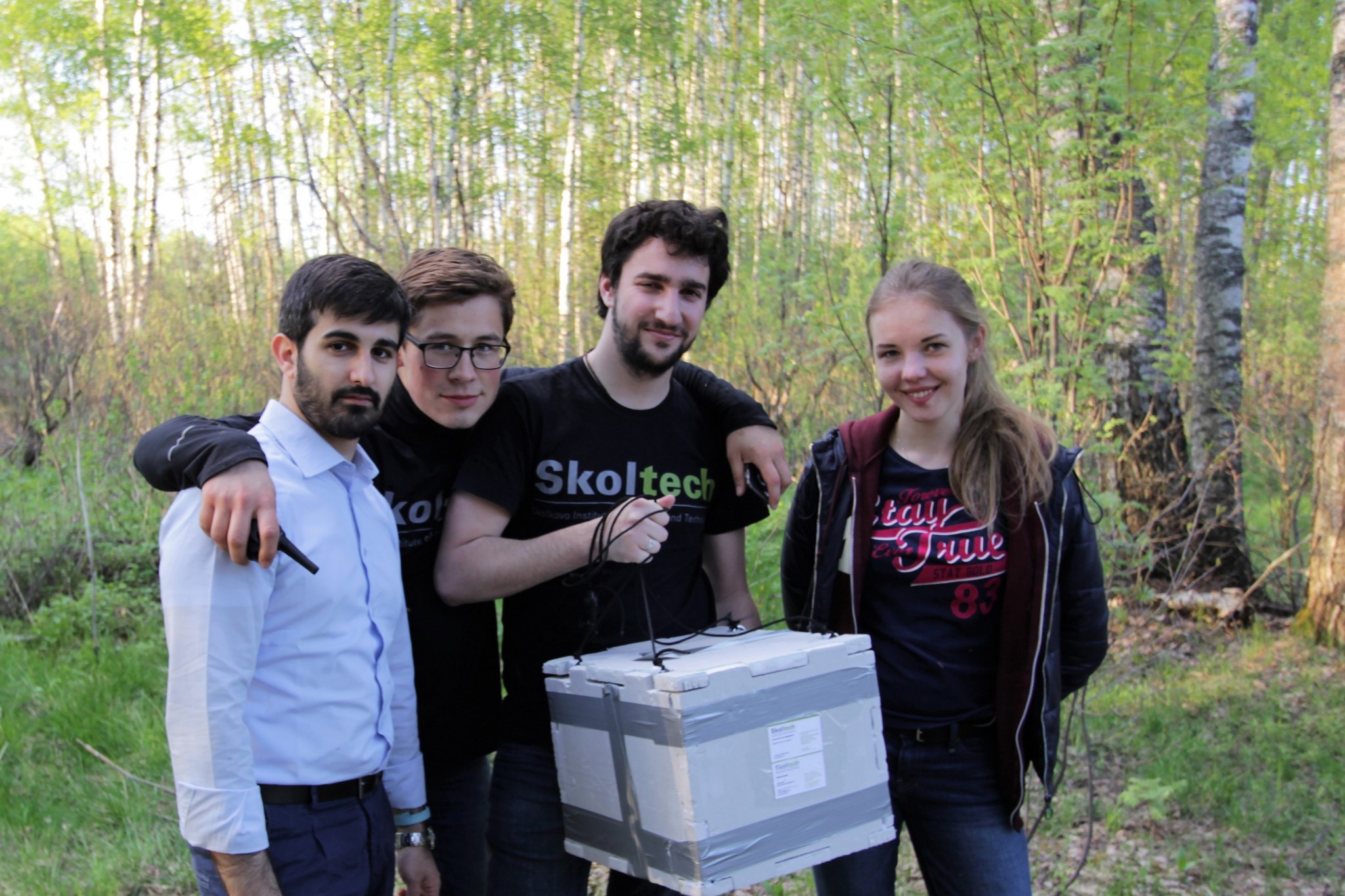