The 2018 Skoltech Innovation Workshop is nearing completion and students are working on finishing their creative projects ahead of this Friday’s final presentations and the Saturday deadline for written submittals. The following is a review of what some student groups are now focusing on, based on their latest interim project updates. 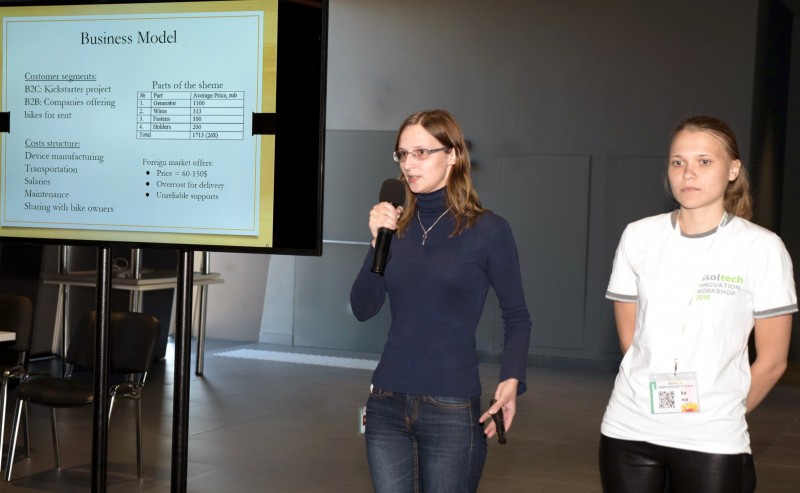 During their Innovation Workshop’s presentation to mentors, the “Ride and charge” team presents the business model assessments based on initial market evaluations. Photo: Timur Sabirov / Skoltech

One team decided to tackle a problem that bicyclists who travel long distances are familiar with: dying phone batteries, particularly when listening to music or using navigation assistance. The students came up with a device called “Ride and charge” that would allow bicyclists to charge their phones while biking by converting mechanical energy into electric energy. The portable system consists of a generator that converts the energy, a detachable power bank that stores it, and a USB connection for the telephone. Portability and weather-resistance will be the main competitive advantages of this device.

While similar products exist abroad and perform successfully, this would be the first of its type in Russia, according to the team’s interviews with bikers and stores focused on sports and bicycle sales. Based on the perceived market need, the students are proposing the funding their device through Kickstarter (as some of the companies abroad did with similar gadgets). To ensure that they reach their end users, the students will either work with companies renting bikes or directly with sports and bike stores.

Another team’s project deals with transportation as well, albeit a different type: featuring a mobile application that would wake up commuters who strive for those extra minutes of sleep on their way to work or studies. The team developed an app for Android that combines navigation, Bluetooth and an alarm system that will solve the problem of missing a bus or metro stop due to oversleeping. As Android applications are somewhat easier to develop, the team decided to start with this platform, planning in the future to create a cross-platform application to reach all interested users. After constructive criticism from the mentors during the presentation of this project’s first iteration, the team continued developing it with such feedback in mind and received better reviews during their latest presentation.

As Yosef Shavit, an invited Innovation Workshop mentor from Israel, observed: “One of the most important things in business is knowing how to pitch an idea. After the mentors’ instructions and feedback, teams are incorporating the input in their presentations and are doing better already.” He underscored the Innovation Workshop’s importance of introducing students to initial challenges faced in the world of business, and commended the efforts of Skoltech’s Center for Entrepreneurship and Innovation in organizing the month-long challenge.

Mentor Yosef Shavit: “The Innovation Workshop gives Skoltech students a real opportunity to understand the problems and see that technology can be a tool to make the world a better place.” 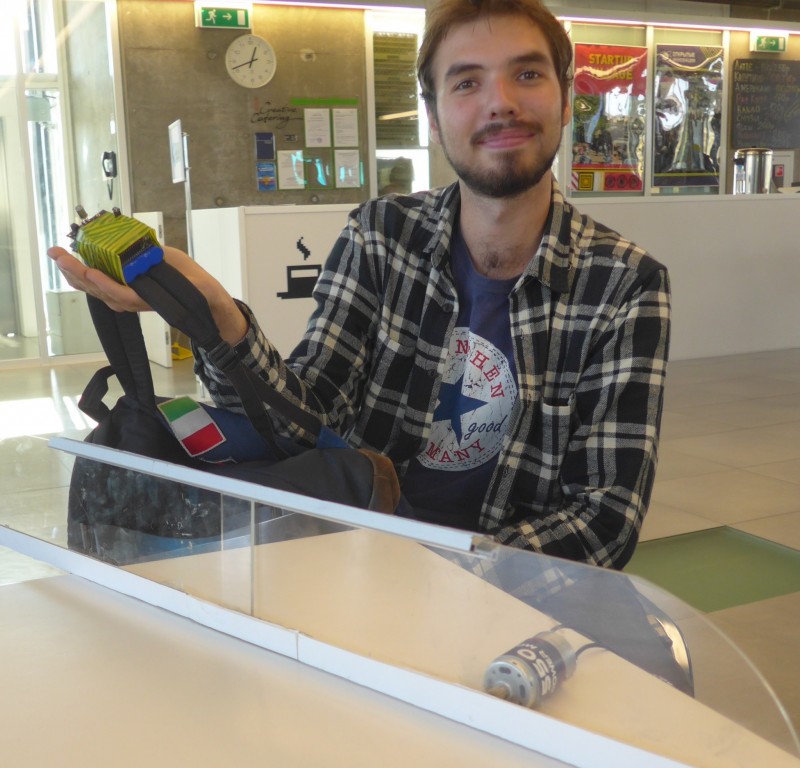 In developing the “AirInTrain” project prototype, students created an experimental dual-sensor circuit board, which was attached to a backpack strap for mobility evaluations.

The focus of a separate team is on technology to better the quality of life for commuters, pursuing a program called “AirInTrain.” The goal is to increase the amount of fresh air within metro trains by opening windows automatically when interior temperatures increases, or the amount of CO2 reaches high levels. “AirInTrain” would feature a dual-sensor circuit board – prepared by students in an experimental version during the Innovation Workshop – which has two sensors: one for measuring temperature, humidity and air pressure; and the other for tracking the CO2 levels. Based on data received from the sensors, a signal can be sent to an electric motor that opens the window. Individual train cars would have their own systems, not being dependent on conditions in other cars.

While the team is still finalizing some of the technical details, such as whether to open all windows simultaneously or only some of them at a time, they already have developed their business model. Their concept is to begin implementing the system in the Moscow metro, later partnering with the Russian Railways – the country’s main freight and passenger railway company. Their vision is to continue expanding the system’s use across the country, working with metro systems in other Russian cities. 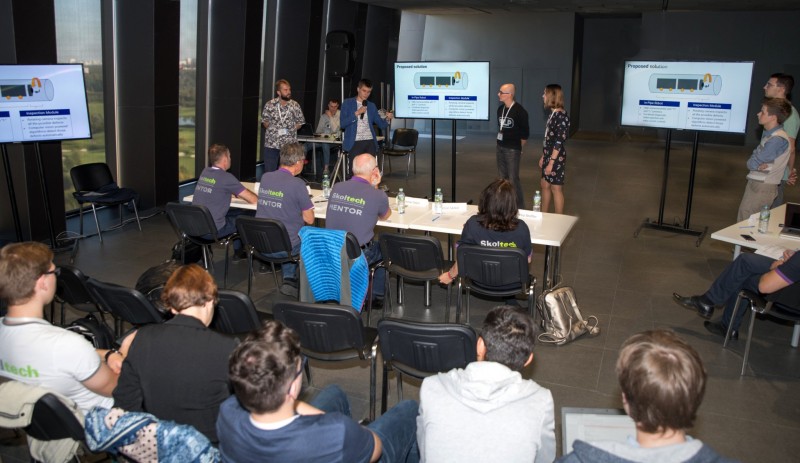 The serious issue of water loss during delivery to users is the subject of an Innovation Workshop group’s project dubbed the “In-pipe inspection module.” On average, over 25 percent of a utility’s water could be lost due to corrosion and aging pipes, creating significant environmental and financial problems. The team is working on a new in-pipe inspection robot with high maneuverability and a rotating camera using algorithms powered by computer vision for automatic detection of problems. Conventional in-pipe robots that exist today are slow and ineffective, creating issues for the water pipeline industry as well as pipeline manufacturers and insurance companies – all potential end-users for the project.

There currently are several companies that work with in-pipe robotics – particularly in the oil and gas industries – but input from Innovation Workshop mentors led the team to refocus on communities’ water systems. The team believes its competitive advantage is the technology, which combines multiple aspects, including maneuverability, smart detection, live video, the quality of images, and a small overall size. The team’s device also would be able to predict remaining lifetime of a pipe and recommend treatment options using neural networks.

Additional details on the 2018 Innovation Workshop are available in the previous stories: